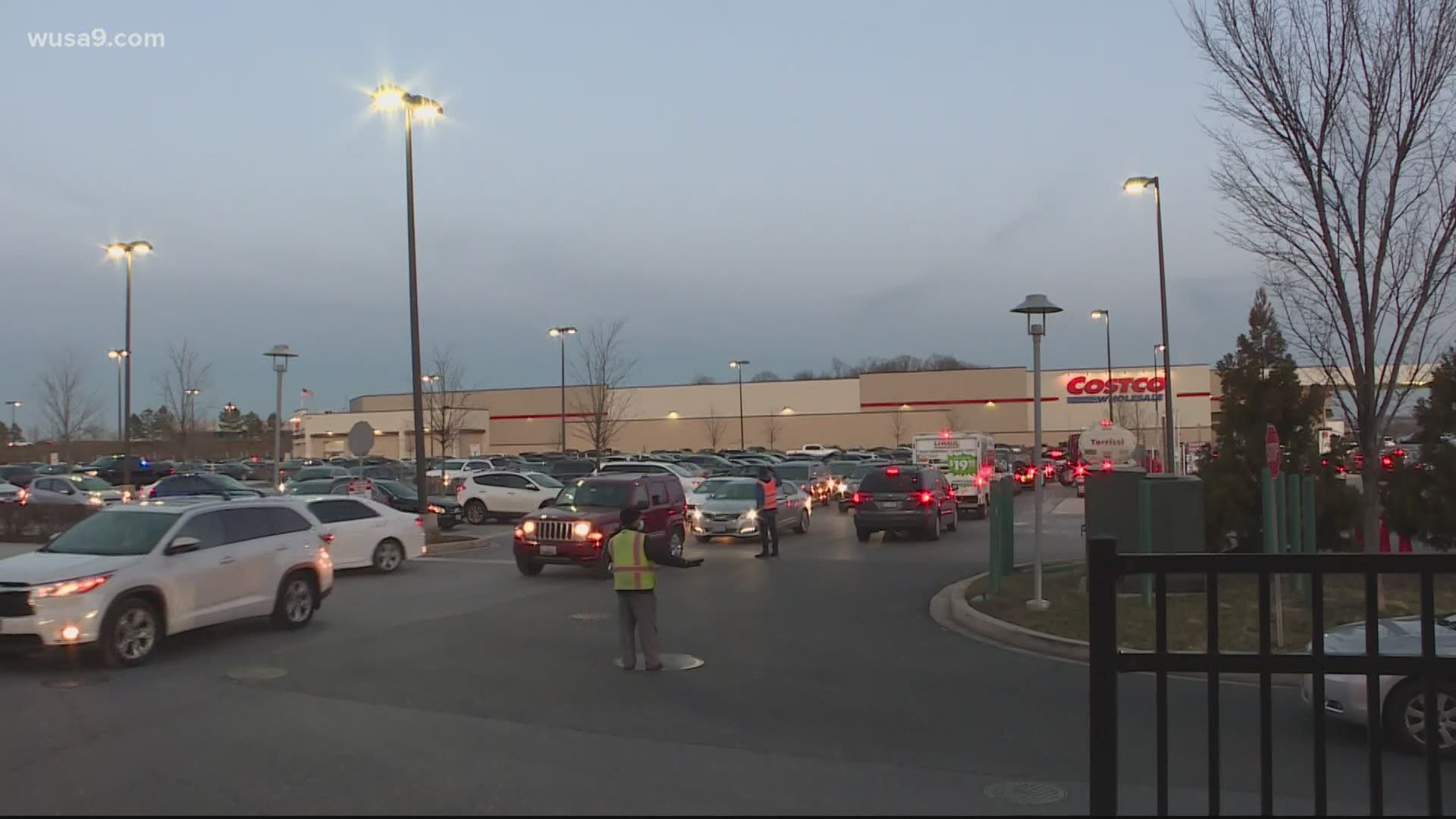 WASHINGTON — Grocery stores across D.C., Maryland and Virginia saw long lines and a rush by people to gather supplies ahead of the winter storm bringing snow to the region on Sunday through early Tuesday.

Trader Joe's on 14th Street in D.C. had a long line wrap around the block early Saturday afternoon, and traffic at the Costco not too far away caused long lines for drivers that were in the parking lot of the store and the streets around the complex.

A woman that was in the traffic at Costco, trying to go to another store, told WUSA9 that Costco had been a "madhouse" all day from what she had seen.

“I had to wait in line for 45 minutes,” Lucy Dow said. “People were stocking up, but I was in and out and I’m going to get what I need in here and I’m going back in the house."

“We’ve been pretty much steadily slammed the entire day," Patrick Grant, a MOM'S Organic Market Operations Manager in training said. "We see more people buying ice melt, cold and flu stuff, but our produce has been getting killed too. So I think it’s a lot of regular shopping mixed with storm shopping.”

There are a good number of grocery stores in the region that are still watching how many people are in their stores due to limiting admittance because of the COVID-19 coronavirus.

“We ain't ever had to wait in lines like this. It’s the corona,” Dow said.

Someone directing traffic at Costco said any time people hear the word “snow” they lose their mind.
It took 30 minutes for me to make it the actually parking lot area because the traffic was so backed up #WUSA9Weather @wusa9 pic.twitter.com/kVNEoSCmEG

“I saw some guy with like ten gallons of water, I don’t think it’s going to be that long," Jack Sykstus who was stocking up on groceries in D.C. said.

As someone originally from Alabama, Sykstus said he's excited about the winter weather but also making plans to bunker down for a few days.

“We've been here a few years now but we haven’t had much snow for the last few years. So we're learning how to adapt to the snow world,” Sykstus said.

A flurry of people are making their way to the grocery store ahead of tomorrow’s winter storm.

This is the line outside of Trader Joe’s #WUSA9Weather @wusa9 pic.twitter.com/jE0rXWd14M

On Saturday, the National Weather Service added D.C. along with most of Maryland and Virginia, where 4 to 8 inches snow will be possible. Ice accumulation of under a .25" ice is possible late Sunday night, too.

Some localities across the region canceled COVID-19 vaccination appointments due to the impending winter weather impacting the region on Sunday.

RELATED: List of COVID-19 vaccine cancelations in the DMV due to winter weather

RELATED: DC Public Works crews treat roads ahead of snow storm that will hit the region