Pictures and videos posted to Twitter by emergency services and residents show the severity of the storm and damage left behind. 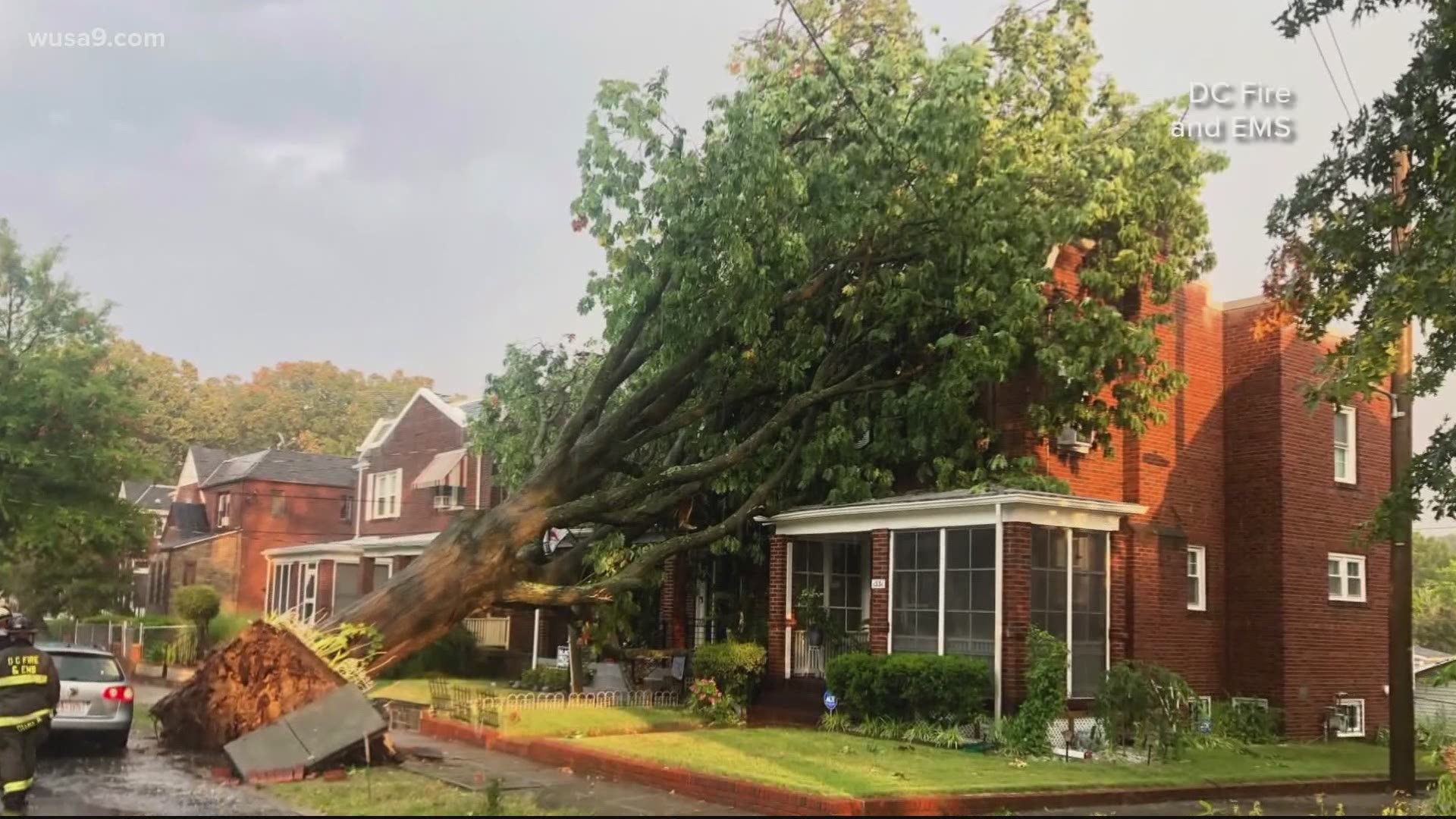 WASHINGTON — Crews are on the streets cleaning up the last of fallen trees, power outages and flooding after a severe thunderstorm moved through the area Monday evening.

Utility crews were spotted in the area just outside of Trinity Washington University on Michigan Avenue in Northeast D.C. working to restore power lines.

Around 5:30 a.m. Tuesday, A downed tree on Sligo Creek Parkway in Silver Spring, Md. has shut down the roadway in both directions between Piney Branch Road and Maple Avenue. The road is expected to reopen by 10 a.m., Maryland National Capital Park Police said.

SILVER SPRING: Sligo Creek Pkwy is CLOSED both ways btwn Piney Branch Rd & Maple Ave due to a downed tree across the roadway. (5:30am) @wusa9 #GetUpDC pic.twitter.com/zLPr7K7Fen

A downed tree on a house was reported Tuesday morning in the area of Piney Branch Road in Takoma Park, Md. As of 5:25 a.m., the Road is also closed in both directions from Maryland Route 410 and Eastern Avenue.

TAKOMA PARK: Piney Branch Rd is CLOSED both ways btwn MD-410 & Eastern Ave because a downed tree on a house... (5:25am) @wusa9 #GetUpDC pic.twitter.com/UB8ZIhz9g2

Pictures and videos posted to Twitter Monday evening by emergency services and residents show the severity of the storm and damage left behind.

D.C. Fire and EMS shared photos of a large tree that fell on a house in the 1300 block of Webster Street in Northeast D.C. Fire and EMS said the house sustained no structural damage and no one was injured when the tree fell.

D.C. Fire and EMS said another large tree fell on a house in the 600 block of Irving Street in Northwest D.C. Eight adults and a child was displaced from the home and Fire and EMS called for a building inspector due to apparent structural damage.

Devastating! Strong winds during last night’s storm sent a tree slamming into this home on Irving Street in NW DC.

A mom and her son were inside at the time, but thankfully no one was hurt. @wusa9 #getupdc pic.twitter.com/39VA7miXRi

D.C. Fire and EMS shared a video after a gas line was ignited by a fallen power line on Kennedy Street in Northeast D.C. during the storm.

A person was rescued in the 400 block of Rhode Island Avenue in Northeast D.C. from high water beneath an overpass, according to D.C. Fire and EMS. That person was not injured.

BIG branch down on a car in the Bloomingdale area from the flash storm. @wusa9 pic.twitter.com/5Utwum8F7j

That severe storm that blew through DC left a mark in Petworth. @wusa9 @TenaciousTopper @CMLewisGeorgeW4 pic.twitter.com/HrQm8pKocd

Three people were shot Sunday around 4 p.m. in the 100 block of Q Street, Northwest.