Remnants of Hurricane Ida are expected to bear down on the region Wednesday, elevating anxiety in Alexandria, and one candidate is using it to further his campaign. 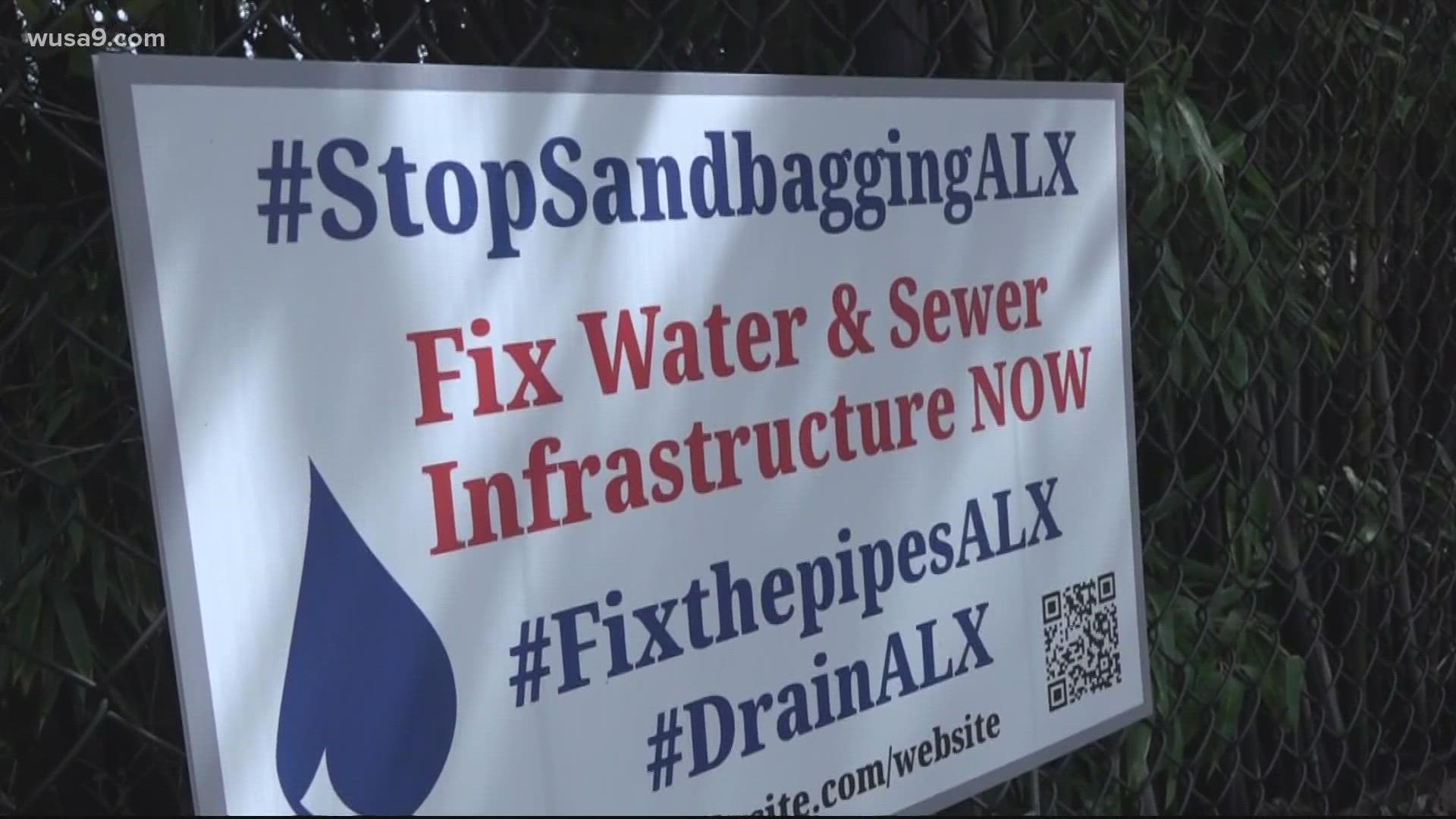 ALEXANDRIA, Va. — Free sandbags will be available to residents of Alexandria beginning Tuesday morning, as the region braces for potential flooding as the remnants of Hurricane Ida move through the mid-Atlantic.

"Due to possible coastal and river flooding from the remnants of Ida, the city will be distributing free sandbags Tues. Aug. 31 from 9 a.m.-noon at 133 S. Quaker Lane," the city tweeted Monday.

It could be the third time in less than four weeks that the city has been struck by high water.

One candidate for Alexandria City Council is tapping into flood frustration in hopes of getting elected in November. Darryl Nirenberg supporters are blanketing flood-prone Alexandria neighborhoods with yard signs saying, "It's time to fix our storm drains. It's just common sense."

Due to possible coastal and river flooding from the remnants of #HurricaneIDA, the City will be distributing free sandbags tmr, Tues. Aug. 31 from 9am-noon at 133 S. Quaker Lane.

As in the past, limit 5/address and first come, first serve. pic.twitter.com/OSBmbii3iP

While door-knocking Monday, Nirenberg said the flood issue cuts across political divides. He is the lone Republican running in a field of seven for six available at-large council seats.

"I certainly hope that as a result of this campaign, more focus is put on storm drains and this becomes a priority of city council," Nirenberg said. "I have knocked on more than 500 doors across the city so far. What I find is that even though the storm drains only affect certain portions of the city, people across the city want to see it addressed because they recognize infrastructure is one of the core responsibilities of local government.”

Alexandria’s Mayor Justin Wilson pointed out that he and the council already unanimously voted to double a special stormwater fee paid by taxpayers to add an additional $400 million over the next 10 years to pay for a long list of flood hardening improvements.

"Flooding is a major priority for all of us," Wilson said Monday.

Meanwhile, #DRAINALX has emerged as a social media and grassroots movement to pressure the city to do more, faster.

Nirenberg is calling on the city to appoint a storm drain Czar to take control of the issue, cut red tape, and tap into federal infrastructure money as fast as possible.

How many residents have we already lost? With #Ida in the forecast, how many more will we lose? #residentreports #intheirwords #DrainALX pic.twitter.com/E9gk6XGFDS

WUSA9 reached out to other council candidates for their positions on flooding issues.

“We need to listen to the residents on the city’s new flooding advisory committee as we prioritize projects, and it’s important to ensure that we are addressing our overall system capacity problems at the same time that we are making spot fixes so that we don’t end up with new flooding elsewhere,” McPike said.

He called for making Alexandria a leader in the fight against climate change.

“I fully support the recent action that the city has taken to use the America Rescue Plan Act funding to accelerate and add neighborhood spot improvement projects to the current slate of projects designed to address our sewer and sanitation system," Candidate Sarah Bagley said. "I also applaud the use of ARPA funds to launch a pilot project that will reimburse residential property owners who have invested in flood mitigation strategies.”

Candidate Alyia Gaskins called for monthly updates from city staff on the status of current drainage projects and how funds from the newly raised stormwater fee are being spent.  She called for “leveraging technology such as sensors, pictures from residents, and 311 calls to ensure investments are proactive and based on real time data.”

Gaskins also calls for “developing a tax relief program for impacted community members, with a focus on seniors and those on fixed incomes, who have spent a significant amount of money on cleaning and repairs.”

All of Alexandria's council members run at-large. The top 6 vote-getters win seats on the council.