Around 50 million tourists visit New York City every year.  But, there's one attraction most people miss. 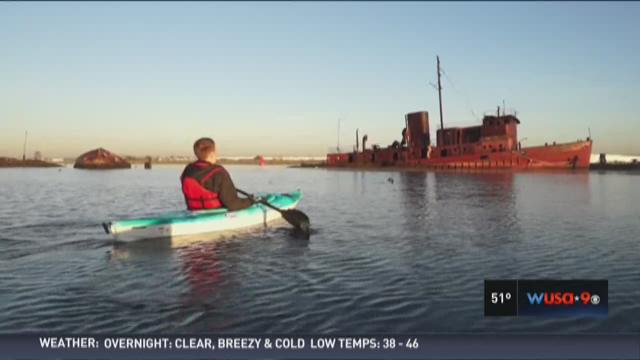 But there's one attraction most people miss. It's an attraction so hard to get to that most New Yorkers don't even know about it.

On the edge of Staten Island, near a place called Fresh Kills, lies one of the most unusual graveyards in the United States.

"This is obviously dangerous," Sylvester said. "These boats are falling apart."

The only way to get here is by boat.

For some urban explorers like Sylvester, this place is a lot more interesting than Times Square.

"It's a hobby, going into any place that has since fallen victim to time and is in disrepair and disuse, to me is my favorite thing to photograph," Sylvester said. "In a way it's not meant to be seen. It's dying."

Through the years, dozens of ships have been dumped here. Some date back a hundred years.

"It's amazing to see how much of the rust has eaten away at this," Sylvester said.

They were brought here to be recycled. But decades of neglect, rot, and decay have turned this place into a type of hidden museum for those who enjoy a bit of a challenge.

"All these boats here, at one point did have a purpose. They did have a crew. They meant something and now basically we are floating literally in their graves," Sylvester said.

There's an old tugboat that witnessed the worst maritime disaster in New York history, that left more than a 1,000 people dead.

This graveyard holds the first Navy ship to have an African American crew during World War II.

"There's wood and medal underneath the water that you have to look out for," Sylvester said while canoeing among the debris.

There's also a boat that was used in the Marshall Islands in 1948 when the U.S. was testing nuclear weapons.

"It's not a sanitized," he said. "The water smells like sewage."

Times Square certainly has a lot more lights. But if you want to kayak inside an old New York ferry, there's only one place to go.

Consider yourself warned: this old ship graveyard isn't very tourist friendly. Parking is a challenge, it's a bit of a walk, and kayaks have been known to get damaged from the debris from the old ships.

Visit at your own risk. But if you do, it'll be worth it.

PHOTOS: Abandon ships rest in a graveyard near Staten Island

Abandon ships rest in a graveyard near Staten Island