A viral video shows a golf cart cruising down Route 50 in Maryland after the passengers claim to have missed their $35 Lyft ride from Bowie to D.C., video shows. 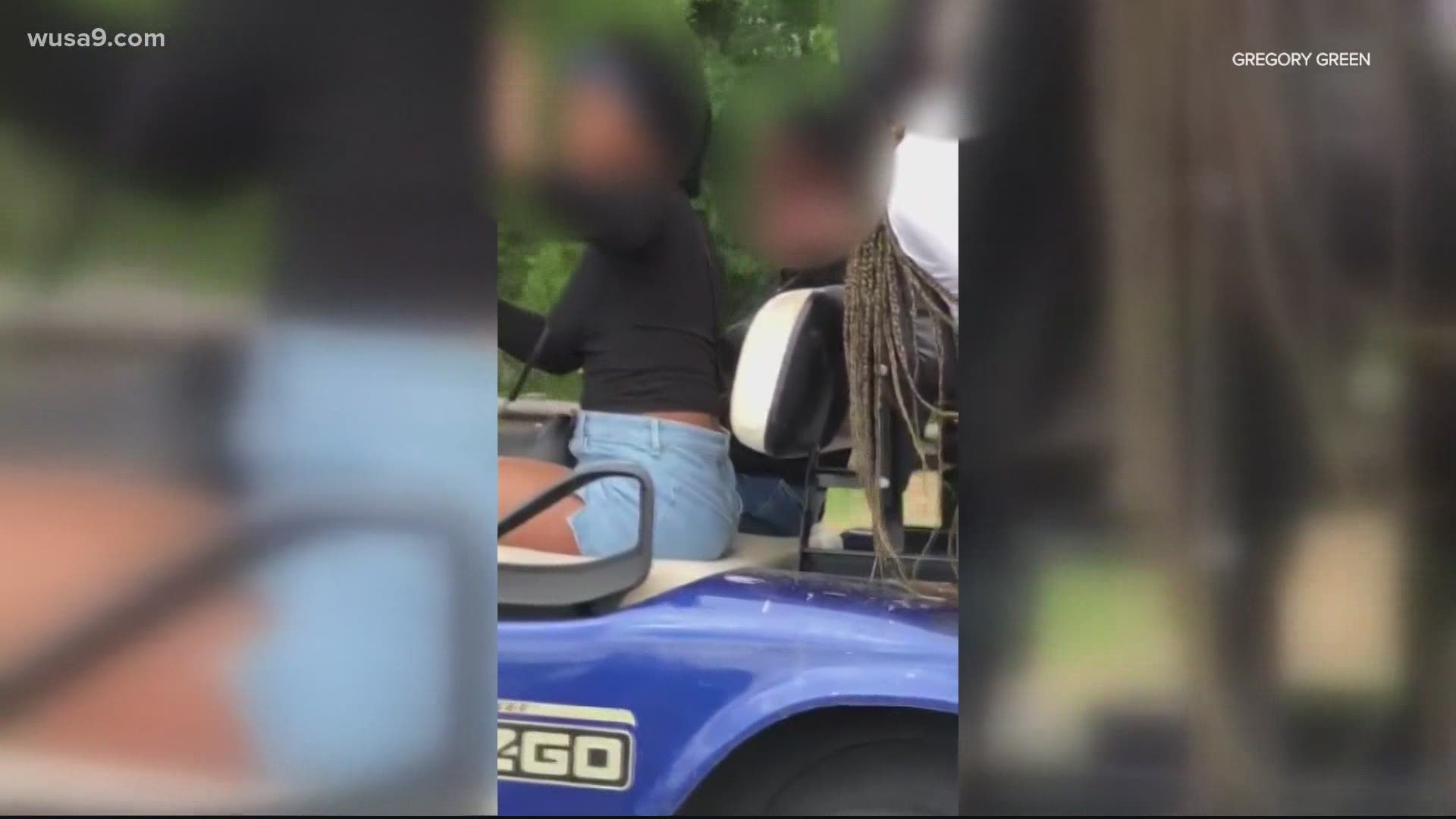 BOWIE, Md. — A viral video posted to Twitter this weekend shows five girls cruising down Route 50 near Bowie, Maryland, in a stolen golf cart – apparently determined to make it to D.C. after missing their Lyft.

The video was captured by Gregory Green on September 12, who happened to drive past the girls and told them that what they were doing was not safe.

"This is too dangerous," Green said to the girls in the video.

The driver of the golf cart asked Green if he would give them a ride since he was recording them with his phone. Some of the teens in the video could be seen trying to hide their faces with their masks and bonnets.

"Yes, I'll give you a ride, because y'all need to pull over," he said.

But the girls kept driving and told Green to stop recording them.

"I'm just saying it's dangerous. I don't want y'all to get hurt," Green said.

NOTE: Graphic language in some of the videos below.

The video now has over 3 million views. One Twitter user found the Instagram account that belongs to the girl who claims to be the driver behind the wheel of the golf cart. The driver revealed that they drove the golf cart on the highway because they had missed their $35 Lyft pickup from Bowie, Maryland, to Washington D.C.

RELATED: Face mask rules are growing but enforcement proves to be a challenge

“Y’all really think me and my b—he's just gonna ride in the golf cart in the highway,” Instagram user @AshiaDiorr said. "We really missed our $32 Lyft from Bowie to D.C."

Her friend later corrected her saying that the ride was actually $35.

Green spoke to WUSA9 on Monday and said seeing the golf cart on the highway obviously took him by surprise.

"I’m thinking what is this golf cart doing?” he said. "I could see people saying 'slow down' and honking their horns. They were looking calm and normal like they’re just driving on a Sunday drive.”

With many cars and trucks on Route 50 at the time, he said the situation brought all sorts of danger and put other drivers at risk.

"This really was very troubling," he said. "On the highway at that very time were huge 18-wheeler trucks. They had no seatbelts on. Nothing.”

Green said he decided to take video of the encounter to teach his own children a lesson.

"If you have children, everything becomes a teaching moment after a while," he said. "I could clearly see my daughter on this golf cart with these girls because of the pressure from her friends. I hope they understand that taking the advice of your friends is probably not a good idea.”

The Bowie Police Department confirmed the incident and said the five teenage girls on the golf cart were later taken into custody after being charged with stealing the golf cart from Alvista Bowie Apartments.

"Even beyond the felony theft of a motor vehicle, there was certainly some poor decision making at play," wrote Bowie Police Chief John Nesky in a statement sent to WUSA9. "It is extremely dangerous and reckless to operate a golf cart on a road, let alone a highway such as Route 50. The cart Is moving at such a lower speed that other drivers approaching it at the speed limit would not be able to see it in time to brake or avoid a collision."

"When you start seeing other people being alarmed about what you’re doing, you probably should decide to take heed to what they’re saying to you," he said. "I thought it was dangerous. That’s all it was. It wasn’t me trying to go viral or nothing like that.” 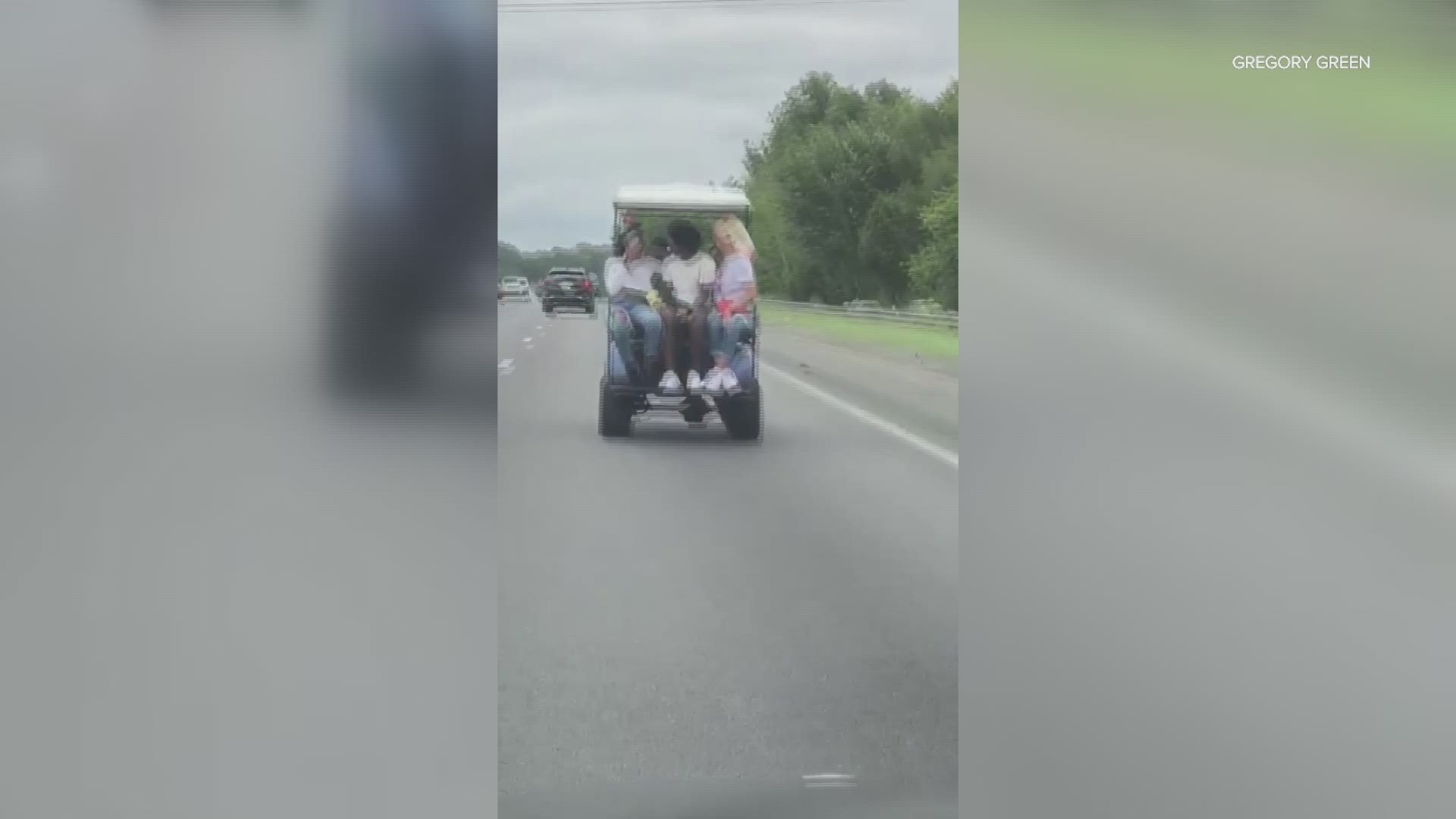 RELATED: 'It only takes a split second' | Delivery drivers see spike in car thefts during pandemic