6 Metro stations are shut down. Plan your commute here

On Saturday, Metrorail closed 6 Blue and Yellow line stations south of Reagan National Airport for the entire summer. Now's your chance to take a water taxi to work. 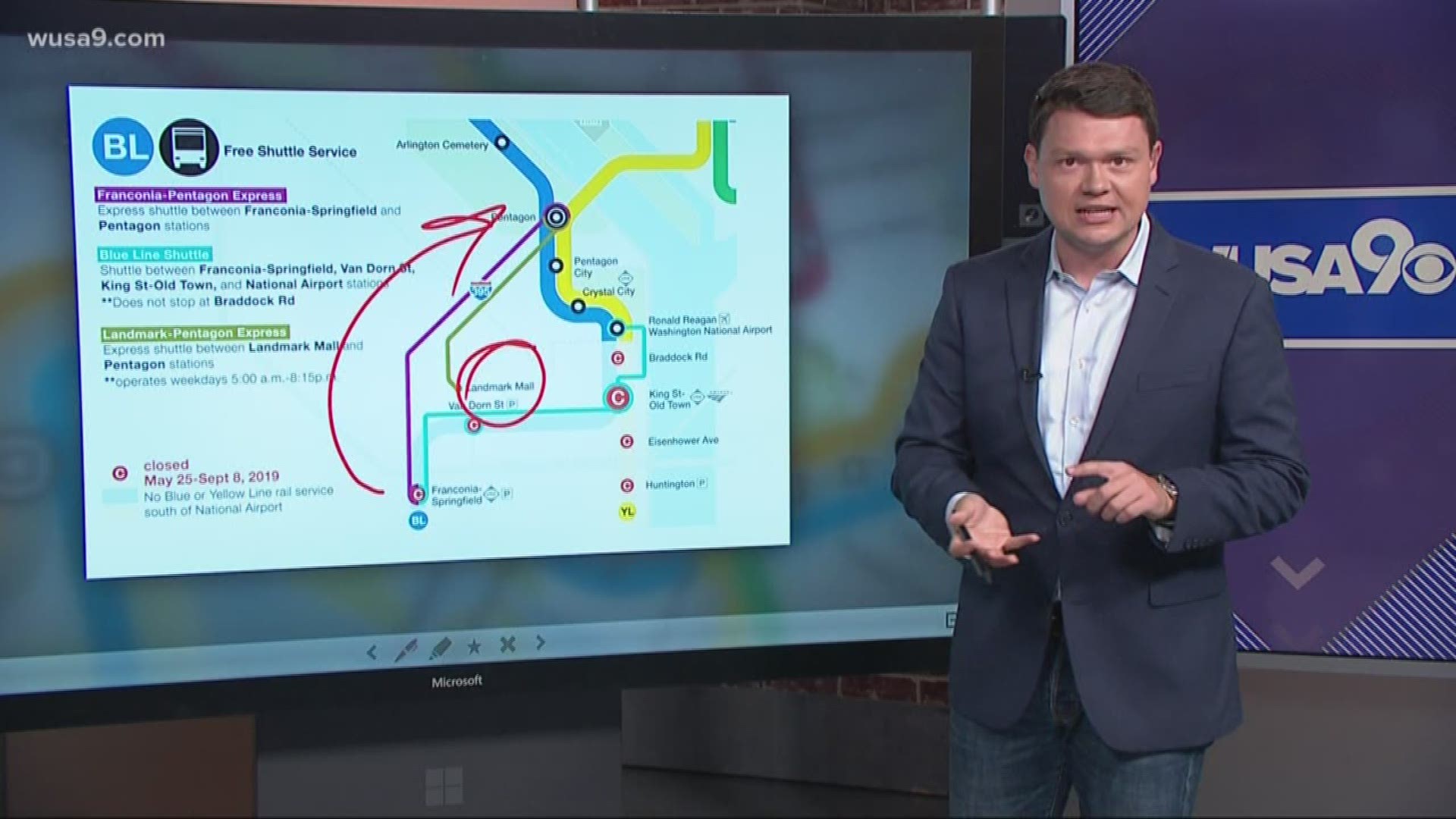 ALEXANDRIA, Va. — Six Metro stations in Northern Virginia will be shuttered Saturday for the entire summer.

Do you know how you'll get to work after Memorial Day weekend? Cross this idea off your list, transportation officials say: Don't jump in your car alone and drive to the office.

The roads can't handle 17,000 more vehicles each day — the number of estimated riders affected — without significant problems, even gridlock, they say.

"Whether or not you usually take Metrorail, now is the time to make sure you are familiar with all your transportation options and have a plan for how to get around this summer," Alexandria Mayor Justin Wilson said.

► MAY 22: Slug lines offer commuter alternative during Metro shutdown
► MAY 22: What you need to know about the 6 Metro stations closing

Options are the name of the game: bicycles, carpools, electric scooters, regular buses, shuttle buses, slug lines, telecommuting, trains and water taxis. Be creative, be flexible but also be sure to add at least 30 minutes to your commute time.

Stations south of Reagan National Airport will be closed from the Saturday before Memorial Day until the Sunday after Labor Day, Sept. 8, so workers can reconstruct the above-ground platforms that are showing cracks and breaks in their concrete. Those stations are Braddock Road and King Street-Old Town on the Blue and Yellow lines, Eisenhower Avenue and Huntington on the Yellow Line plus Van Dorn Street and Franconia-Springfield on the Blue Line.

The closures are part of a three-year plan for Metro to rebuild the outdoor platforms at 20 Metro stations.

The Washington Metropolitan Area Transit Authority has an interactive Alternative Travel Options trip planner. Among all the options to explore:

The Mount Vernon bicycle trail, which follows the Potomac River, can take you to Alexandria for a water taxi ride; to National Airport for the nearest open Metro station; to the District across the Arlington Memorial Bridge; or to Rosslyn, where it ends but connects to other trails.

If you don't have your own bike, Capital Bikeshare has multiple docks in the Alexandria area and the District, but none in Fairfax County outside the Interstate 495 Beltway where the Franconia-Springfield and Huntington stations are located.

Capital Bikeshare is a public program across several Washington-area jurisdictions that a private contractor operates. It has fees ranging from a single 30-minute trip for $2 to an $85 annual membership.

Commuter Connections helps with ride matching through formal carpooling and vanpooling and can point you toward Park & Ride lots to meet fellow commuters for ride sharing or linking up with bus service. The regional network of transportation organizations also has developed the CarpoolNow app to help you find commuters going to your destination.

Informal, instant carpooling in the Washington area is called slugging. And slug-line organizers hope that adding lines that start Tuesday at Franconia-Springfield and Van Dorn Street Metro stations as well as Landmark Mall will help reduce congestion. From those locations, commuters will have the opportunity to go to L'Enfant Plaza, 14th or 19th streets northwest.

Drivers benefit from the instant ride sharing because they can have free use of the I-95 express lanes, which require three people to ride in a vehicle, without paying a toll. Some parts of I-395 don't allow drivers without two passengers to use the high-occupancy vehicle lanes at all unless they have Virginia's Clean Special Fuel license plates for hybrid vehicles.

Alexandria has launched a nine-month pilot program involving seven electric scooter companies that will operate through Sept. 30. Dockless scooters from at least six of the seven — Bird, Bolt, Jump, Lime, Lyft and Skip — are available now, and if Spin isn't already on the streets, it should be soon, Fifer said.

Users rent them through the apps of each company. You may want to use them to scoot to the nearest open Metro station.

The average range of an e-scooter is about 20 miles, but proceed with caution on the way home from work. Dockless electric scooters are charged every night and left wherever during the day.

If they've been used for multiple trips, you'll need to pay special attention on the apps to the estimated remaining battery life or you could find yourself walking the rest of the way home.

• Alexandria has its own citywide DASH bus service, which stands for Driving Alexandria Safely Home. During the platform closures, DASH is discounting its fares to $1 through its app.

• Metrobus routes are included in WMATA's regular Trip Planner so you can personalize your route.

• Metroway is WMATA's premium bus service that runs between the Pentagon City and Braddock Road Metro stations with stretches of dedicated bus lanes on surface roads.

Blue and Yellow line shuttles that closely mimic the routes of the closed sections of Metro lines plus two express shuttles from end-of-line stations Franconia-Springfield and Huntington are free.

But each has a little twist that might benefit you.

• The Blue Line shuttle will start at Franconia-Springfield, skip the Braddock Road station, add in a stop that's not a Metro station at Washington and King Streets and end at National Airport, reversing course on its return trip. Be aware: Because National Airport will be the first functional Metro stop on the southern ends of the Blue and Yellow lines, it will be busier than usual and you may want to avoid it if you don't need to fly out of the airport.

• The Yellow Line shuttle starts in Huntington, includes the Braddock Road station but skips National Airport, ending instead at Crystal City, the next stop north of the airport

• The Franconia-Pentagon express heads directly between the last stop on the Blue Line and the Pentagon, which also has a Metro stop.

• The Huntington-Pentagon express heads directly between the last stop on the Yellow Line and the Pentagon.

• The Landmark-Pentagon express traverses weekdays only between Landmark Mall and the Pentagon.

The federal Office of Personnel Management is encouraging government agencies to allow their employees to use the telework option more frequently this summer. If workers can't totally telecommute, the feds are hoping that supervisors will allow some regularly scheduled remote work.

If you have high-speed Internet access at home — you love your Netflix, right? — and your employer has secure electronic access for remote work, ask your boss whether this arrangement could work at least some of the time for you.

Virginia Railway Express' Frederickburg Line commuter railway operates weekdays with stops at its own stations in Franconia-Springfield, Alexandria and Crystal City. Its end points in the District are L'Enfant Plaza and Union Station.

It also has cooperating agreements with some Amtrak trains.

Monthly ticket holders can have unlimited travel between the fare zones on their ticket in a calendar month, and they pay a third less than single-ride fares.

Boats from the Potomac Riverboat Co. will be traveling more often between the Old Town Alexandria waterfront to The Wharf in Washington near L'Enfant Plaza starting Tuesday through Labor Day.

The trip takes about 25 minutes, and a commuter pass that is good for unlimited trips through the end of the year is $199. Alexandria residents and those who work in Alexandria are eligible for a rebate from the city of Alexandria: $100 on the $199 commuter pass and $8 of a $10 round-trip ticket.

Credit: Washington Metro Area Transit Authority
Replacement of cracked concrete on platforms at the King Street Metro station in Alexandria, Va., and five other Virginia Metrorail stations means the complete closure of the stations from May 25 to Sept. 8, 2019.