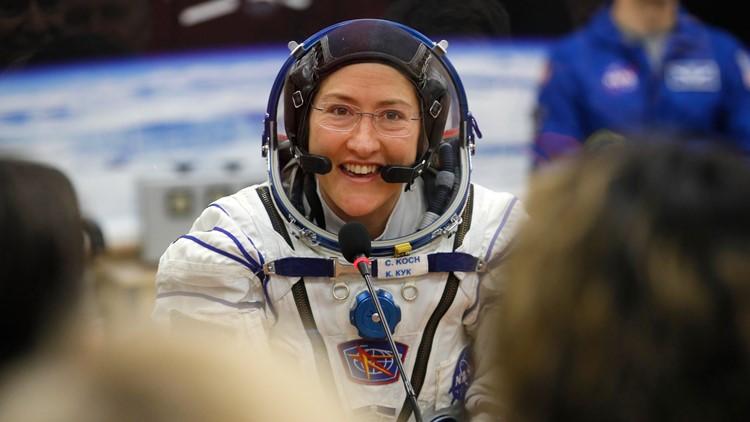 Photo by: AP Photo/Dmitri Lovetsky, Pool
In this Thursday, March 14, 2019 file photo, U.S. astronaut Christina Koch, member of the main crew of the expedition to the International Space Station (ISS), speaks with her relatives through a safety glass prior the launch of Soyuz MS-12 space ship at the Russian leased Baikonur cosmodrome, Kazakhstan.

US astronaut sets record for longest spaceflight by a woman

CAPE CANAVERAL, Fla. — A U.S. astronaut has set a record for the longest single spaceflight by a woman.

She is expected to spend about 11 months on board the International Space Station -- returning to Earth on Feb. 6, falling short of astronaut Scott Kelly's 340-day U.S. record.

A Russian cosmonaut holds the world record at 15 months on a single mission aboard the former Mir space station in the mid-1990s.

CBS News reports Koch participated in four spacewalks, including the first all-female walk in October. Speaking of Whitson, Koch told "CBS This Morning" it's an honor to surpass her milestone.

"Peggy is a heroine of mine who's also been kind enough to mentor me through the years," Koch said. "You know ... it's not so much how many days you're up here, but what you do with each of those days.

"That reminds me to bring my best every single day."