The Nationals' next game is Monday at Busch Stadium when Washington opens a three-game series against the Cardinals. 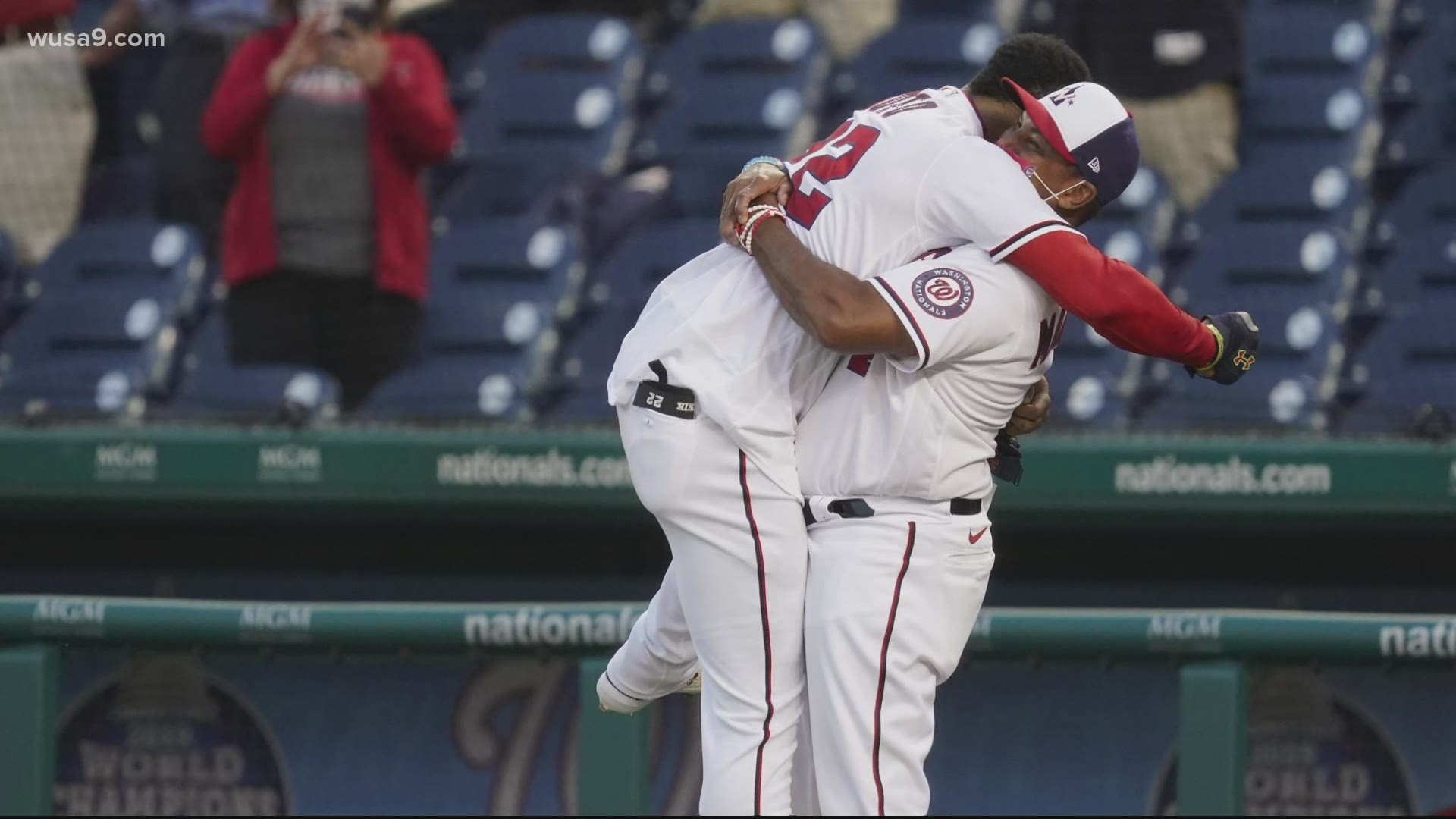 LOS ANGELES — Clayton Kershaw and Max Scherzer have won three Cy Young Awards and one World Series ring apiece since their spectacular careers both began in 2008. Entering this season, they even had exactly 175 victories each.

Kershaw has nudged slightly ahead of his friendly rival in that last category, thanks to the Los Angeles Dodgers' superb start to the season — and one fortunate break in the outfield Sunday when these two veteran aces went head to head.

Kershaw pitched six innings of five-hit ball to win an outstanding duel with Scherzer, and rookie Zach McKinstry drove in all three runs in the defending champion Dodgers' 3-0 victory over the Washington Nationals.

Kershaw (2-1) struck out six with no walks in his first home start since winning his first title. The Dodgers’ longtime star barely came out ahead in the fourth career matchup between two of the greatest pitchers of their generation.

“I have a ton of respect for him and everything he’s done in this game,” Kershaw said of Scherzer. “You try not to attack it any differently. You always want to put zeros on the board. But after we got that early run, you want to make it stand up since Max probably isn’t going to be giving up many more runs.”

The difference between Kershaw and Scherzer was one long fly ball: McKinstry drove in Max Muncy in the second inning when Victor Robles lost it in the hazy LA afternoon sun.

Otherwise, Scherzer (0-1) was just as good as Kershaw, pitching six innings of three-hit balls with five strikeouts and a walk. But his Nats were shut out for the third time in four games, including twice in this three-game series sweep by LA.

“You want to go out there and pitch your best, because these are games you remember,” said Scherzer, who retired 10 straight Dodgers after Muncy scored. “These are matchups you remember, and really how you judge yourself, how you perform in these situations. ... You know you’re going to be in a close ballgame when you’re going against Kersh. He was great today.”

Kershaw wasn’t as overpowering as Scherzer, but he kept Washington scoreless with precision and guile. With his final pitch, he struck out Jordy Mercer on a full-count slider well below the strike zone to end the sixth, stranding Turner on second and earning yet another standing ovation from the mini-sellout crowd of 15,049.

Both Kershaw and Scherzer have posted winning records in 11 consecutive seasons, the longest active streaks in the majors. With his victory, Kershaw improved to 177-77 in his career, becoming only the ninth pitcher to go 100 games over .500 since divisional play began in 1969.

“It’s just a product of being on great teams,” Kershaw said. “That’s really all it is. I’ve been fortunate to be on Dodger teams that make the playoffs year after year. We always win games.”

McKinstry added the second homer of his big league career in the seventh, a two-run shot off reliever Tanner Rainey.

McKinstry's 10 RBIs this season lead the Dodgers, who are off to a major league-best start of 8-2 despite playing this series without injured former MVP outfielders Mookie Betts and Cody Bellinger.

“He’s a baseball player, man," Kershaw said of McKinstry. “I think that’s the best compliment you can give a guy in this game. He's like the left-handed Kiké (Hernández), doing things that Kiké used to do.”

Trea Turner had three hits for the Nationals, who are 1-5 after starting the season late and short-handed due to coronavirus woes.

“What often happens is when your team is not scoring runs, you put a little added pressure on yourself to be the guy to drive those guys in, and I’m seeing a little bit of that right now,” Washington manager Dave Martinez said. “You start seeing guys swing a little harder, maybe chasing pitches they don’t normally chase. We just need to relax, and it’s going to happen. These guys are playing hard."

Los Angeles got three scoreless innings of relief. Washington’s first two batters in the eighth singled off Blake Treinen, but Juan Soto flied out to shallow center on a 3-0, letter-high pitch while Treinen escaped the jam.

Kenley Jansen threw a flawless eight-pitch ninth for his second save.

“I haven't seen that (recently),” Kershaw said of the once-beleaguered Jansen's 94-mph cutter. “That was awesome. That's a good sign for the Dodgers.”

Nationals: Martinez hopes LHP Jon Lester, 1B Josh Bell, 2B Josh Harrison and OF Kyle Schwarber can be reinstated from the injured list by Monday. They've been out all season under COVID-19 protocols.

Nationals: Eric Fedde (0-1, 27.00 ERA) takes the mound Monday at Busch Stadium when Washington opens a three-game series against the Cardinals.