Linebacker Jon Bostic was ejected from the game in the third quarter after an illegal shoulder-to-head hit on Dallas quarterback, Andy Dalton. 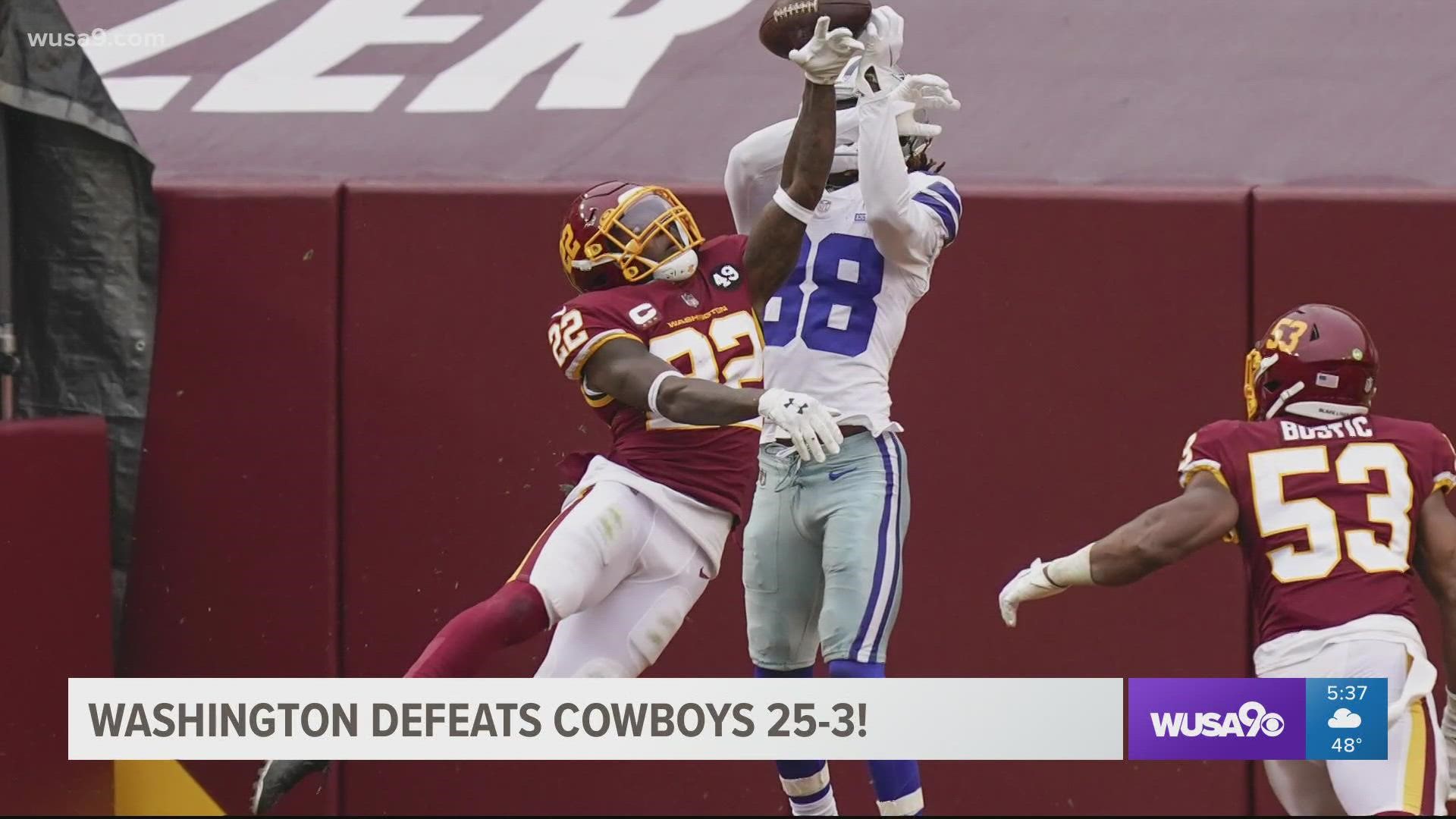 WASHINGTON — Washington's defense finally clamped down on a struggling opponent, piling up six sacks, an interception and a forced fumble that became a safety in a 25-3 blowout of the Dallas Cowboys on Sunday that snapped a five-game skid.

Montez Sweat led Washington (2-5) with 2 1/2 sacks, Cole Holcomb had one to go along with a red zone interception and Landon Collins knocked the ball out of Andy Dalton's hands for an early safety before leaving with an ankle injury. Dalton was under siege all day behind a patchwork offensive line before being knocked out of the game in the third quarter on a shoulder-to-head hit from Jon Bostic, who was ejected.

Dalton was 9 of 19 for 75 yards before being injured and walking off under his own power to undergo concussion evaluation.

Washington allowed 142 total yards to win a game by double digits for the first time since November 2018. 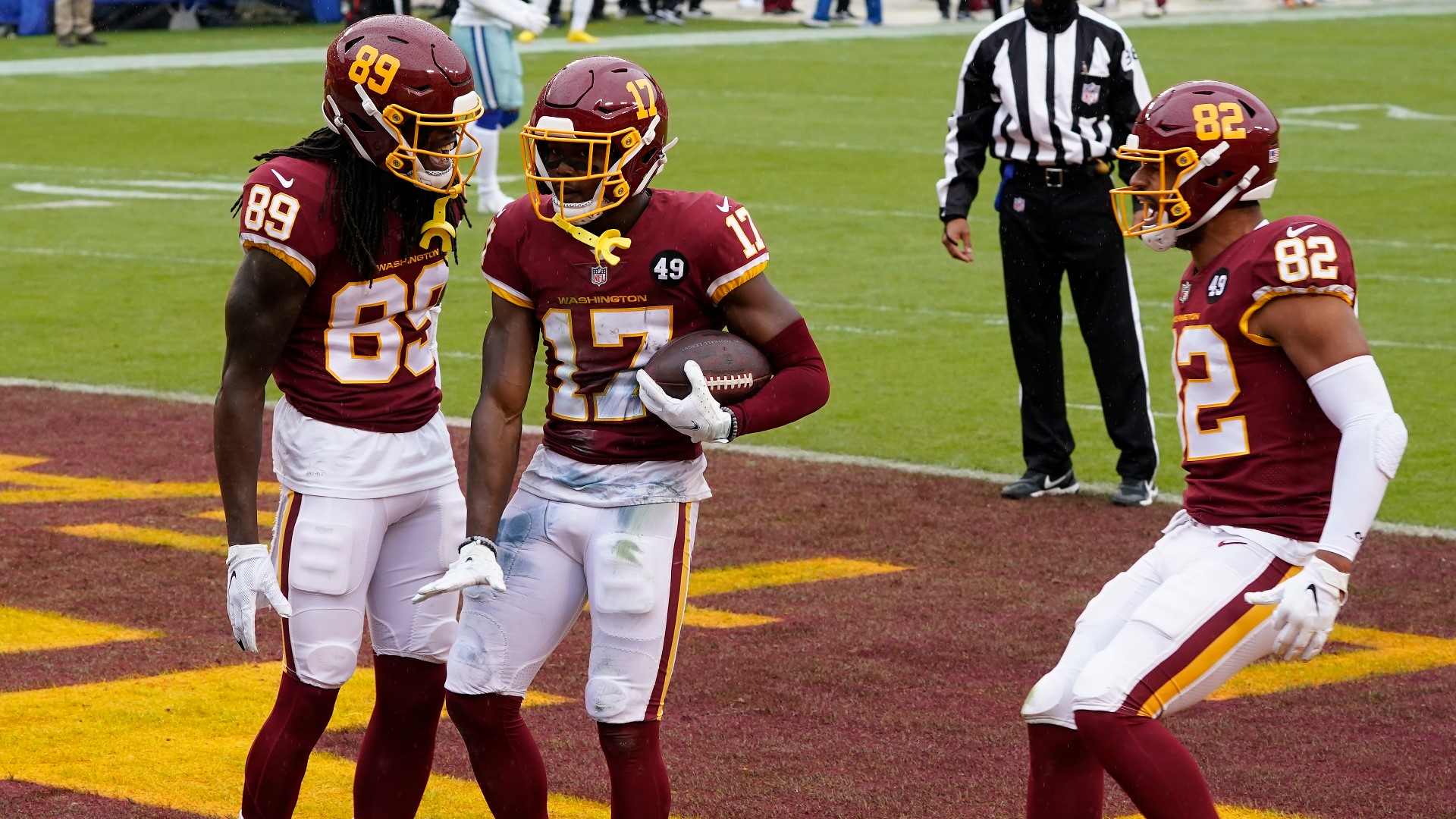 A dominant defensive performance combined with rookie Antonio Gibson's first 100-yard rushing game and a touchdown and a well-managed game by Kyle Allen were enough to put Washington back in the thick of the race in the dreadful NFC East.

Allen was 15 of 25 for 194 yards with TD passes to Terry McLaurin and Logan Thomas in his third consecutive start since taking over as starting quarterback. Coach Ron Rivera thought Allen gave Washington a better chance to win than 2019 first-round pick Dwayne Haskins, who was demoted to third string.

The Cowboys were forced to turn to rookie Ben DiNucci after Dalton's injury. He was 2 of 3 for 39 yards after the game was out of hand. Dallas dug a deep hole after becoming the first NFL team since at least 2000 to allow 20-plus points in the first half in six games in a row.

Washington was the last team this season without a single-game 60-yard rusher. Gibson had 72 yards and a TD by the end of the first quarter and finished with 128 on 20 carries.

As a team, Washington picked up 208 yards on the ground while allowing just 83.

Washington will play the New York Giants next, at home on Nov. 8 after a bye week. It will be the first game at FedEx Field this season with fans allowed, as the team is selling 3,000 seats to season-ticket holders.

Cowboys: Had an entirely different left side of the offensive line with tackle Brandon Knight (knee) and All-Pro guard Zack Martin (concussion) out. ... LBs Leighton Vander Esch and Aldon Smith each had an injury scare on the same third-quarter drive.

Washington: Collins injured his left ankle in noncontact fashion early in the second quarter. He limped off to the injury tent before being ruled out minutes later and carted off the sideline with his helmet on and head down. ... Sweat was evaluated for a concussion in the second half.