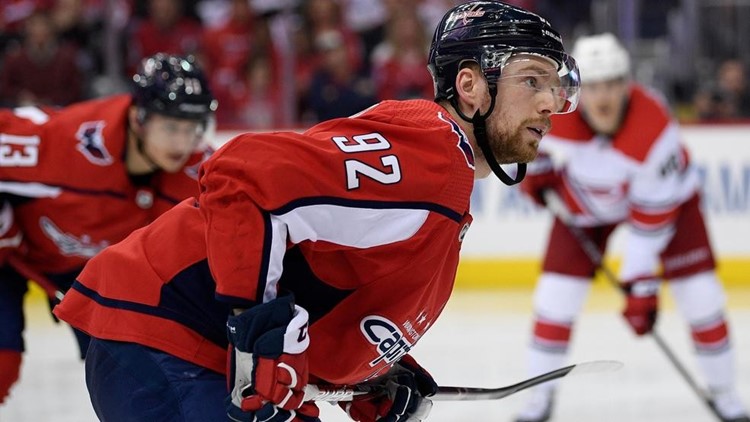 Photo by: AP
Capitals forward Evgeny Kuznetsov in a game against the Carolina Hurricanes.

In a statement by the IIHF, the hockey federation says Kuznetsov failed a drug test on May 26, at the Hockey World Championship.

The statement says that the Caps forward was provisionally suspended June 13, and his suspension will end on June 12, 2023.

The NHL released a statement saying that they have been briefed about Kuznetsov's suspension.

"Unlike the IIHF, cocaine is not considered a performance enhancing drug and is therefore not a Prohibited Substance under the NHL/NHLPA Performance Enhancing Substances Program," says the statement. "Instead, it is considered a drug of abuse that is tested for and for which intervention, evaluation and mandatory treatment can occur in appropriate cases."

According to the statement, Evgeny Kuznetsov has voluntarily sought help, and has agreed to regular testing.

The league goes on to say that Kuznetsov will meet with NHL commissioner Gary Bettman, and that the NHL will hold off on any further comment, or any other action, until after the meeting.

In a statement from Kuznetsov, the Capitals' star accepted the suspension, and apologized to Caps fans.

"From the first day I took the ice in D.C., the Washington Capitals organization and our fans have been nothing but great to me and my family," says the statement. "I feel absolutely terrible for letting you down. I realize that the only way I can win you back is to take ownership of my situation and my actions from this point forward.”

The Washington Capitals say they are aware of the positive test result, and expressed their disappointment.

In a statement, the team also says, "We are committed to ensuring he has the necessary support required to work through this situation. We will remain in contact with the NHL as they determine the next steps."

RELATED: The DC curse is finally lifted as Caps capture the Cup

Kuznetsov's failed drug test comes at the same time that the forward denied using drugs after video surfaced on social media of him near two lines of a white powdery substance.

At the time Kuznetsov said that he had never used drugs, and did not intend to.