The only DC-Baltimore sports rivalry is between the owners

For years sports teams in both cities have fought to take the other city's fans. 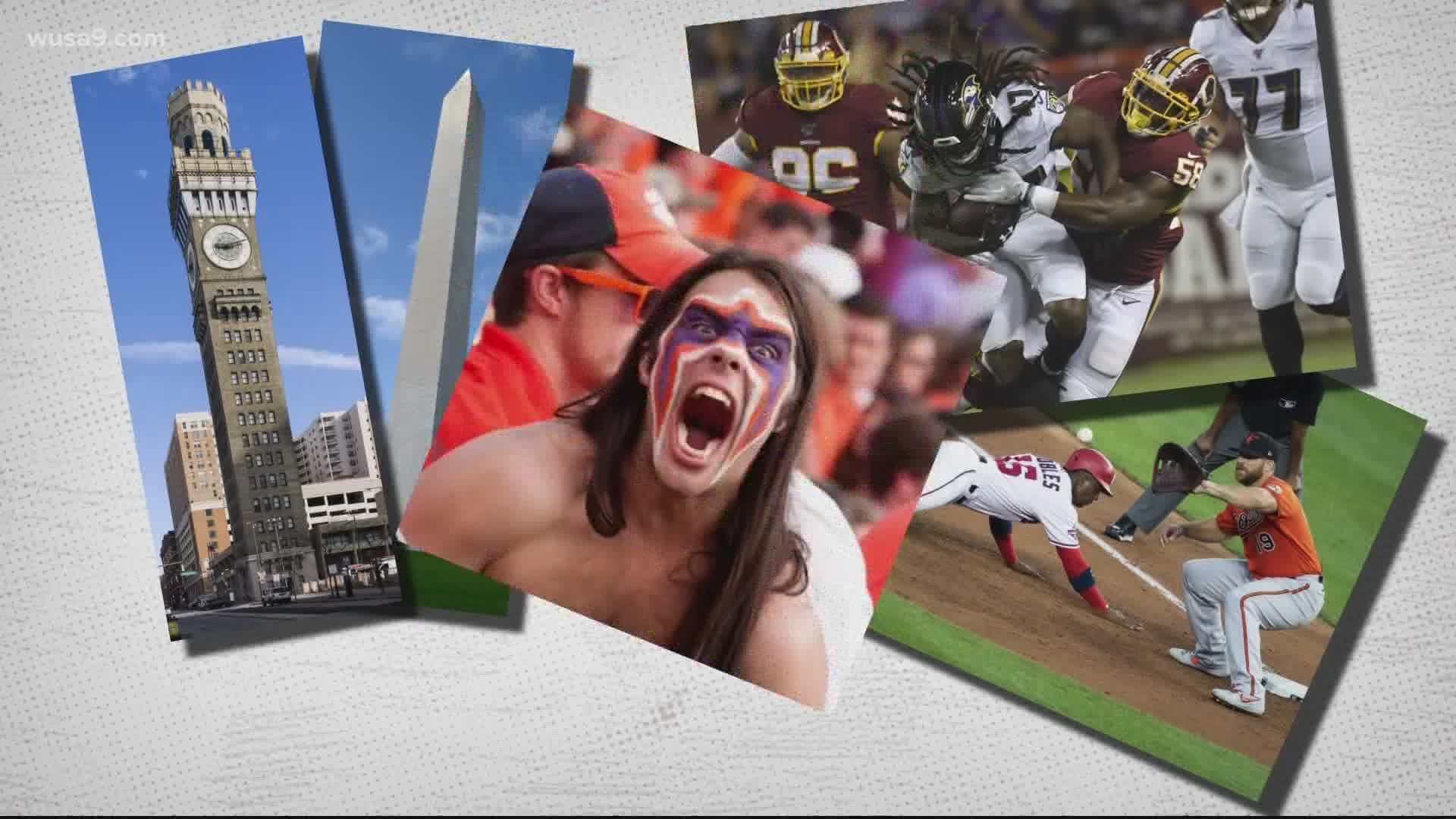 WASHINGTON — Are you ready for the Battle of the Beltways?

This weekend the Baltimore Ravens play the Washington Football Team for only the 7th time since the Ravens moved to Baltimore in 1996.

You would think with Baltimore just up the road this would be a heated rivalry. But it appears the only DMV pro sports rivalry isn’t from the fans -- it’s from the owners.

From the White House lawn to Baltimore’s Inner Harbor can’t be more than 40 miles. In most pro sports situations like this, it creates bitter regional opponents. Except in the DMV, it really isn’t.

Two cities with two sports and no rabid animosity between the fan bases. But the teams’ owners they present a different story.

Go back to 1984, Baltimore lost its NFL team, the Colts. Viviano said that in the following years the Washington Football Team’s-then owner Jake Kent Cook,  had his sights on the new open fan base up the road.

“The Redskins, were even looking at building a stadium in Laurel,” Viviano said. “And moving even closer to Baltimore.”

Viviano said Baltimore fans, for the most part, wanted nothing to do with Washington. The city fought the NFL and Washington’s owner to get a new team.  Which they finally got in 1996 when the Cleveland Browns packed up and moved to Baltimore.

“So, the Redskins may be down the road, but they're not close to the Ravens in terms of any real sense of rivalry,” he explained.

In an ironic twist, a similar scenario played out down in DC on the baseball diamond.

“You want to rivalry that's a real rivalry,” Viviano went on to say.  “That rivalry is playing out in in courtrooms.

Just like the Colts, the Washington Senators left DC in the last century leaving the nation’s capital without a baseball team.

“The only way you could see Major League Baseball in DC was when they would have an exhibition game at RFK Stadium,” Nationals beat writer Byron Kerr said.

Kerr sat in the exhibition game crowds.  He said for decades DC wanted a team back, even Major League Baseball wanted Washington to have a team.

But that didn’t matter because the Baltimore Orioles owner Peter Angelos owner didn’t want DC to get a team.

“So Bud Selig (The Commissioner of Baseball) stepped in the and made a Mid Atlantic Sports Network happen in which majority of the revenue would go to Peter Angelos,” Kerr explained. “That’s how they got Angelos on board and DC got a team.”

The truce between the two cities owners was short lived. Currently the Orioles and Nationals revenue battle is playing out in a courtroom.

These days, that’s the only rivalry that’s heating up between the two cities. After all this Battle of the Beltways isn’t a rivalry for the fans-it’s a rivalry about who gets the fans.

RELATED: DC vs Baltimore: Two cities with distinct cultural differences, but they are only 40-miles apart