If MVP Elena Della Donne and friends can beat the Connecticut Sun in the best-of-five series, they'll become D.C.'s first champion team since the Capitals. 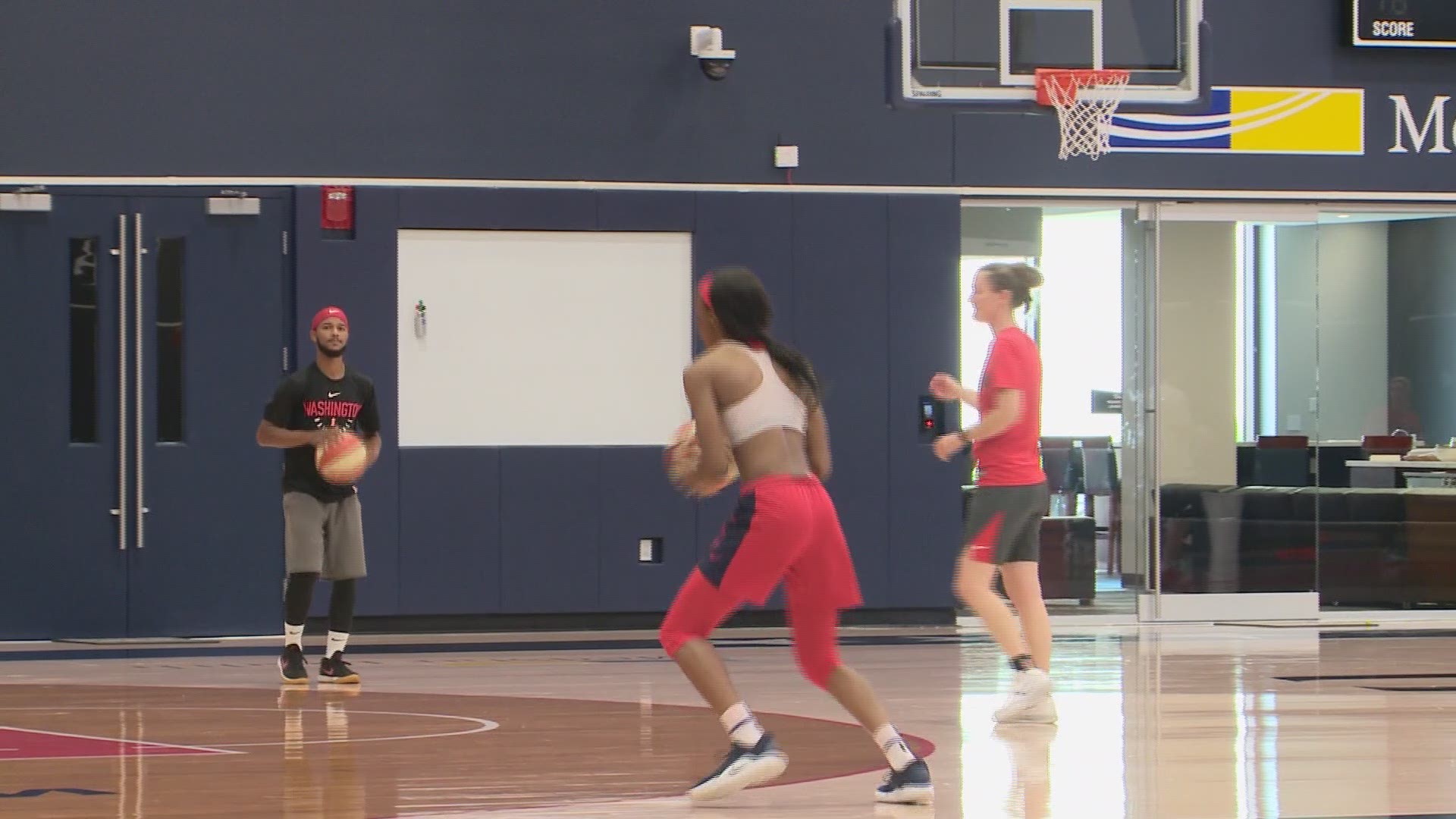 WASHINGTON — I have a crush -- a basketball crush. It's on Elena Della Donne, the MVP of the WNBA and the main reason the Washington Mystics open the WNBA Finals against the Connecticut Sun 3 p.m. Sunday at home.

Okay, I have an affinity for Kristi Toliver's game, too, because she's the most fearless point guard in the game at 32-years-old. And, all right, Natasha Cloud is also one of those money-in-the-bank players who gives no quarter on defense and always makes the right play on offense.

Let's start with Della Donne, who led the Mystics to the best record in the league. And it's not because she's Miss Inside and Miss Outside, as capable of dumping in a pretty jump hook as shooting the 3-point bomb with aplomb.

No, it's her ability to remain so serene in the most chaotic moments of the season. It's her resilience, coming back from a broken nose in July. She has worn a protective mask since then, but her teammates want her to keep it on even after it heals because, as teammate Natasha Cloud accurately says, "Elena is Batman once she puts it on."

It's her economy of movement, the way she never wastes a step or slide toward the rim. Mostly, it's her ability to make history.

No woman in the history of professional basketball in this country has ever been able to make more than 50 percent of her shots from the field, at least 40 percent of them behind the 3-point line and more than 90 percent from the free throw line. Della Donne became the first member of the WNBA's 50-50-90 club this past season. She actually shot 97.4 percent from the line. Only eight NBA players have ever done it, including Larry Bird, Stephen Curry, Kevin Durant and Steve Nash.

Simply, Elena Delle Donne has a game I wish I had and so many others like me wish they had.

I've covered Toliver off and on since her days at Maryland, where Terps fans still stop her in the street sometimes to tell her where they were the moment she hit that step-back bomb from the right wing that forced overtime in the 2006 national title game against Duke. She was but 19 when she rose and released the biggest shot in program history. And I was there for her last game during the 2009 regional final in Raleigh, where she and Marissa Coleman and her teammates cried and cried after a loss to Louisville with a Final Four berth on the line.

She went on to win four titles playing overseas in Russia and another with the L.A. Sparks before coming home to her King George County, Va., roots. Oh, and she's the daughter of George Toliver, the long-time NBA referee whose controversial calls Kristi still hears about from former players whose games were officiated by her father.

"They always say he was petty," she says, laughing. "But much respect. I was literally born into this world. I had a basketball in my hand since I was born."

Did we mention she's also one of a handful of female assistant coaches in the NBA, that the Wizards are actually giving her time off from training camp so she can try and win it all for the Mystics? That she's turned down other assistant coaching offers around the NBA because the Wizards will let her play for the Mystics as long as she's healthy and happy and contributing?

Now, Cloud might be my favorite player of all. It's not her game as much as the person she is. The woman opted not to play overseas this past year because she's pushing for social change. This past June she called out Mayor Muriel Bowser and Ward 8 Councilman Trayon White for not doing enough to eradicate gun violence in Southeast D.C., where the Mystics' home is located.

"When I saw three bullet holes shattered a window at Hendley Elementary, that just hit me in the heart," Cloud says. "Those are 5-year-olds in that class. They shouldn't have to think that's a daily part of their life and go about their days as if it's a regular occurrence that can't be stopped. We need to do so much more for this community."

She sat on an athletes-and-social conscience panel recently next to John Carlos, the 1968 Olympic sprinter who raised his gloved fist with Tommie Smith in Mexico City. She will comment on anything and take on anyone, including Jay Z, who recently partnered with the NFL.

"That's a tough one because the NFL is essentially a group of white billionaires who threatened the jobs of many minority players, threatening to affect their ability to earn wages and feed their families," she says. "But Jay Z has always been at the forefront of change. So I'm giving him the benefit of the doubt and hope it works out."

I know this is bandwagon-ish; it's not like the station has been covering the Mystics all season. Still, here's hoping Della Donne, Toliver, Cloud, coach Mike Thibault and all the Mystics win it all this week and they get the hardware they've worked so hard for after losing to Seattle in last year's WNBA Finals.

DC sports needs good news these days. There's no reason the Mystics can't become the first team since the Capitals to bring a championship to the nation's capital.

This story is part of a new show called The Q&A. If you’ve got questions, we want to answer them. Each night at 7pm and at wusa9.com/theqanda, we’ll tackle everything that you want to know. Just use #TheQandA on social media, email us at TheQandA@wusa9.com or make a comment/mention on any of our Facebook/Twitter/Instagram pages.