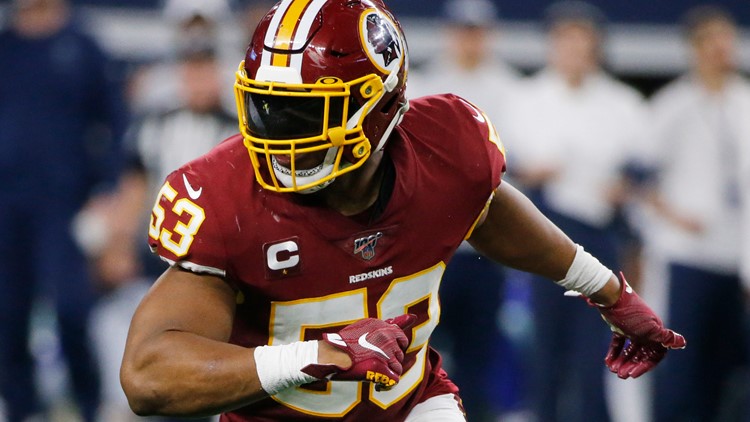 Photo by: AP
FILE - In this Dec. 15, 2019, file photo, Washington Redskins inside linebacker Jon Bostic (53) during the second half of an NFL football game against the Dallas Cowboys in Arlington, Texas. A person with knowledge of the move tells The Associated Press the Redskins have agreed to re-sign inside Bostic to a $6.6 million, two-year deal. (AP Photo/Michael Ainsworth, File)

ASHBURN, Va. — Free agency continues in the NFL and the Washington Redskins suring up their defense. According to ESPN, they will re-sign linebacker, Jon Bostic to a 2 year deal worth $5 million with $1.75 million guaranteed.

The 28 year old started every game for Washington at inside linebacker last season. He finished second on the team with 105 tackles trailing only safety Landon Collins, and also had an interception along with one sack.

Bostic, who turns 29 on May 5, has established himself as a leader on because of his knowledge of the defense. The veteran, who was a 2nd round pick in 2013 by the Chicago Bears, has started 62 games in his career including 44 of the last 46. Bostic has 419 tackles to go with 6.5 sacks and 2 picks.