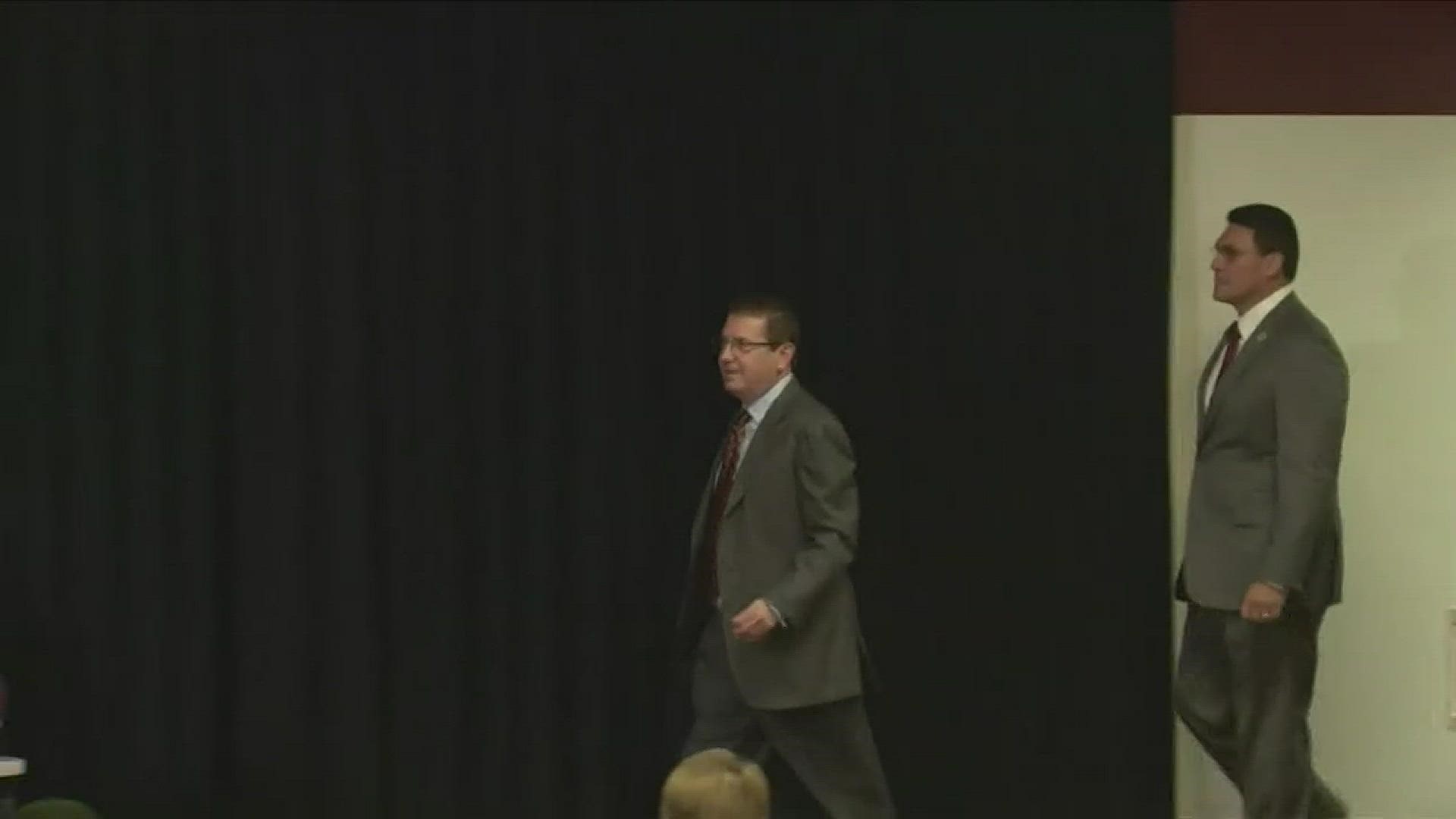 ASHBURN, Va. — Ron Rivera is ready to get to work and said so in an early morning video put out by the Washington Redskins ahead of his news conference at 2 p.m. Thursday afternoon.

The 57-year-old coach that has over two decades of NFL coaching experience will have his work cut out for him after the Redskins finished the season at 3-13 overall.

The hiring of Rivera comes after former Redskins Team President Bruce Allen was let go by owner Daniel Snyder following the team's loss to the Dallas Cowboys on Sunday.

"I took this job for one simple reason. Cause Daniel Snyder came to me with an interesting perspective."

That perspective includes what Rivera described as a head coach centered leadership that doesn't involve a president or general manager holding the majority of the decision making.

Rivera referenced that Snyder had researched that teams like the Patriots with Bill Belichick are a team and organization model that has head coach centered leadership.

"What the Redskins need is a culture change. Someone that can bring us a winning culture to our organization," said Snyder during Rivera's new conference. "I look for a class act. That's how I describe Coach Rivera."

Rivera has already made a splash by hiring Jack Del Rio as his defensive coordinator, who was at the news conference welcoming Rivera.

Del Rio is one of the best defensive minds in professional football. He will bring not only an additional two decades of NFL coaching experience but also experience as a head coach himself.

While establishing a winning football team is what Rivera will be responsible for the most, the veteran coach, who is known for his close relationship with players, said he wants to make sure that those a part of the Redskins organization are doing everything they can to hold up the long history of the team and be the men this community deserves.

"I'll do what I can to help these young men become not just the players we want but the men in the community we need," Rivera said.

In his nine seasons with the team, the Rivera led Panthers made the playoffs four times and made a Super Bowl appearance in 2015, where they lost to the Broncos. Rivera holds the franchise record for most regular-season wins, with 76 wins.

Rivera was fired by the Carolina Panthers on Dec. 3, with a 5-7 record. He even joked during his news conference that it was the Redskins that cost him his job in Charlotte.

His joking chirp at Snyder wasn't the only thing humorous about the news conference. Snyder himself opened up the media gathering by saying "Happy Thanksgiving, everybody." He then followed up his Thanksgiving statement by saying happy New Year. Snyder just may be truly thankful to have Rivera as the head coach of his team.

Rivera is no stranger to changing the culture within a losing team. He inherited a team that was 2-14 in 2010, and five years later they were heading to the Super Bowl.