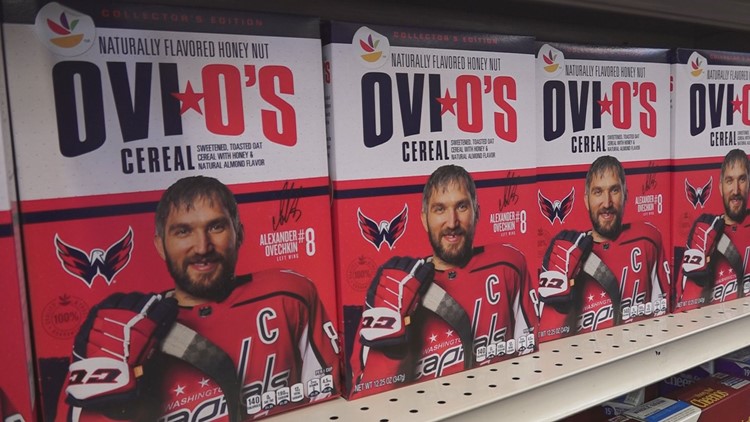 Alex Ovechkin made appearances around the DC area as part of Giant's soft launch of their new Ovi O's cereal.

The cereal, named after the Capitals' captain, is sweetened, toasted oat cereal with honey and natural almond flavor.

At the Arlington Traditional School, and MedStar Georgetown University Hospital, Ovechkin met with kids and ate the Ovi O's.

A portion of the proceeds from the sale of the Ovi O's will go to The Children's Cancer Foundation, Inc.

Ovechkin's work with children has always been important to him.

"It's a great moment," said the Capitals captain. We did a great job to create this box of cereal. I hope people are going to enjoy because it tastes good. We just try to help kids lose cancer."

For Ovi's final stop of the day, he got to work as a Giant Food employee.

He stocked the shelves in the cereal aisle, which ironically was aisle 8, and worked the cash register as customers paid for their groceries.

Most customers bought boxes of the Ovi O's, except for one.

Alex Ovechkin's wife, Anastasia, made an appearance at the store, and did her regular grocery shopping.

Ovi, who had gotten comfortable ringing up boxes of his Ovi O's, needed a little help ringing up produce items.

The Capitals captain says his wife wasn't on the same page when he was asked about the extra challenge.

"I'm mad at her," Ovechkin said jokingly. "We try to do one thing, and she's bringing lots of different stuff. It's not good."

Alex Ovechkin did take time to chat with reporters after his work at Giant was done.

He talked about his bike accident which resulted in several scrapes on his body.

"The bike broke," said Ovechkin. "My pedals broke, [got] stuck, and I don't have time to figure out what to do. Thank god I had a helmet on me."