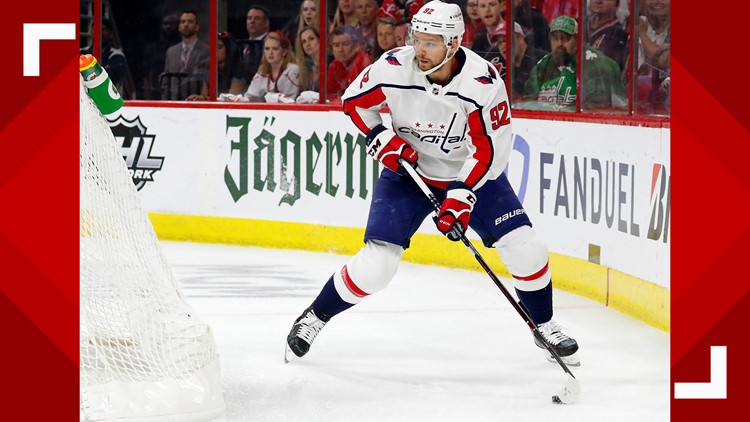 Photo by: Karl B. DeBlaker, AP
Washington Capitals' forward Evgeny Kuznetsov (92) looks to pass the puck April 18, 2019, against the Carolina Hurricanes during the first period of Game 4 of an NHL hockey first-round playoff series, in Raleigh, N.C.

No penalty for Evgeny Kuznetsov's presence in video with possible drugs, Capitals say

WASHINGTON — The Washington Capitals hockey team closed an investigation Friday of Evgeny Kuznetsov, indicating that officials would not punish their star forward for video on social media showing him sitting beside a table that had two lines of white powder and U.S. dollar bills.

The team and the National Hockey League issued statements saying they believed Kuznetsov's explanation of the incident.

"While we are disappointed by his presence in the video, we accept his explanation and apology for putting himself in an unfortunate situation," Washington Capitals officials said. "Evgeny has been a terrific player and an active member of our community, and we expect him to learn from this experience and uphold both the standards the organization has for him as well as his own.”

In a statement Monday to Russian outlet Sport-Express, Kuznetsov said the 22-second video was from a year ago during the Stanley Cup finals in Las Vegas. The original tweet in Russian, since deleted on Twitter, implied that it was recorded last week during the Ice Hockey World Championship in Slovakia, where Russia placed third.

However, the incident actually occurred in December during the Capitals' trip to Las Vegas, The Washington Post reported. In the video, he is without a beard, but during the Stanley Cup playoffs and finals he had grown a beard.

After Kuznetsov went into the room where the video was taken, he left when he saw an unfamiliar woman and strange substances, he told Sport-Express. The video shows him on FaceTime with someone while in the room, but he never interacted with the powder.

"While I have never taken illegal drugs in my life and career, I would like to publicly apologize to the Capitals, my teammates, our fans and everyone else, for putting myself in a bad situation," Kuznetsov said in a statement Friday. "This was a hard lesson for me to learn.”

Kuznetsov, 27, is a Russian citizen who had 21 goals and 51 assists in 76 Capitals' games this past season but just one goal during a first-round loss to Carolina in the Stanley Cup playoffs. He was the Caps' leading scorer in the playoffs when the team won the Stanley Cup a year ago.