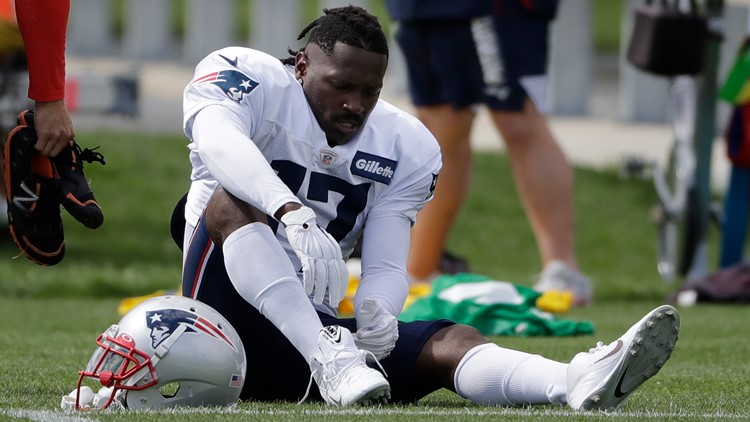 TAMPA, Fla. — Antonio Brown is no longer with the New England Patriots.

“The New England Patriots are releasing Antonio Brown. We appreciate the hard work of many people over the past 11 days, but we feel that it is best to move in a different direction at this time.”

Brown posted a photo of Tom Brady to his Instagram and said “Love ya champ, that was fun.”

The release comes just over a week the wide receiver was accused of sexually assaulting his former trainer in Florida.

The allegations by Britney Taylor made against Brown in a civil lawsuit became known days before the four-time All-Pro wide receiver made his debut with the defending Super Bowl champion New England Patriots. Taylor had a lengthy meeting with the NFL this week.

Taylor has accused Brown of sexually assaulting her on three occasions, including rape, in the lawsuit filed in South Florida. A second woman has alleged that Brown exposed himself to her while she was working on a mural for him at his Pittsburgh home.

The AP does not typically identify people who say they are victims of sexual assault unless they come forward publicly, but Taylor was identified in the federal lawsuit and was quoted in a statement provided by her lawyer.

Click here to read the full statement from Brown's side.

Click here to read the full lawsuit from Taylor's side.

It all came a day after Brown returned to the Raiders following a one-day suspension and a public apology. Hours after being released from the team, he signed with the New England Patriots in a deal worth $9 million this season, with the potential to earn as much as $15 million.

Although the allegations became public last week, Brown practiced with the Patriots, then played on Sunday in a 43-0 rout of Miami, scoring a touchdown. He has not been made available to the media — not even after the game in Miami, despite NFL rules to the contrary.

Two sources told The Associated Press that Brown was not placed on the commissioner's exempt list last week and was eligible to play because no criminal charges had been filed against him and because the NFL hadn't fully developed its investigation.

Players on the exempt list can't play in games or practice with a team but are still paid. A player can be placed on the exempt list at any point. The one-year deal Brown signed earlier this month with the Patriots could be worth as much as $15 million.