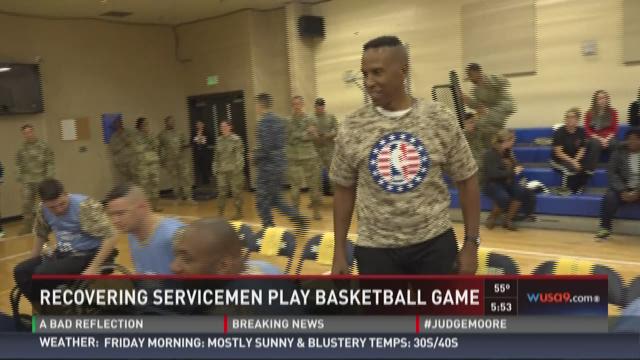 Sports and the military are constantly linked together through various initiatives. Thursday was no different at Naval Support Activity Bethesda.

The installation hosted a special wheelchair basketball game. The teams were coached by NBA Hall of Famer Adrian Dantley, and Mystics guard Tayler Hill. The game was part of the week-long "Hoops for Troops" NBA initiative surrounding Veterans Day.

While there was a winner and a loser on the scoreboard, you got the feeling that everybody came away from the event a winner.

"We appreciate when people come out," said Specialist Stephanie Morris. "It takes us away from the reality of the things that are actually going on with us, and it kind of gives us a break from everything."

Specialist Morris was injured as the result of indirect fire in Afghanistan in 2013. She opted to have her leg amputated below the knee in 2016.

While members of the military benefit from the event by being provided a distraction, the coaches of the teams benefited in a different way.

"My mom was in the Navy herself," said Mystics guard Tayler Hill. "So this is great. They serve our country, and we're grateful for them. All the stuff and the sacrifices they put through with. This Hoops for Troops this week, dedicating to them is something that's really big."

DeMatha alum, and NBA Hall of Famer, Adrian Dantley added, "I really appreciate what our men and women do for the country. Anytime I can give something back and be involved with them, I'm very happy and don't have a problem doing it at all."

Colonel Brian Harthorn, who leads the Walter Reed Bethesda Warrior Transition Brigade, says that while he thinks he can inspire wounded servicemembers, it's the servicemembers themselves who provide the inspiration.

"You want to go talk to them, and you go into the conversation thinking that you're going to motivate or inspire them," says Colonel Harthorn. "You walk away from that conversation, and they've inspired you a thousand times more than you could inspire them. So it's always awesome to see our warrior-athletes on the courts of friendly strife getting after it, and showing all of us what you can do if you put your mind and energy to it."