Players also warm up in Black Lives Matter shirts and have Taylor's name on the back of their jerseys. 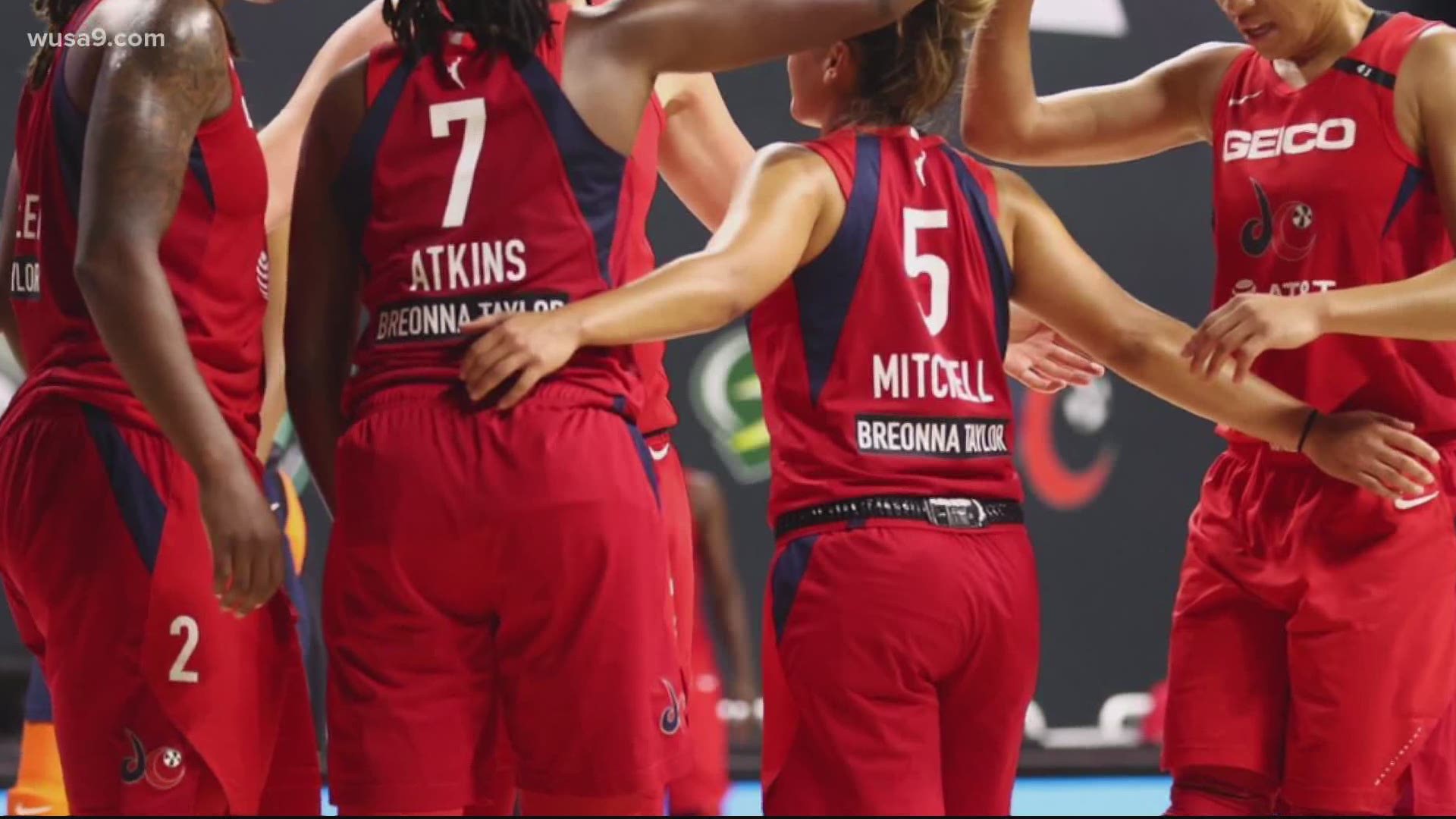 WASHINGTON — The reigning champion Mystics are one of only two WNBA teams to be undefeated so far this season, which got off to a delayed start amid coronavirus concerns. But for the Mystics, 2020 is about more than wins and losses.

The team is part of a league-wide mission to advocate for racial and social justice, including calling attention to the "Say Her Name" campaign.  After the Mystics 94-89 win over the Connecticut Suns Tuesday, a postgame note sent out to media organizations began with a message.

"On March 13, Breonna Taylor, a 26-year-old African-African EMT, was killed by the Louisville police department when the police entered her apartment shortly after midnight and fired numerous shots," Tuesday's postgame note began. "It has been 137 days since her death and the police officers involved have not been arrested. We will continue to #Sayhername." 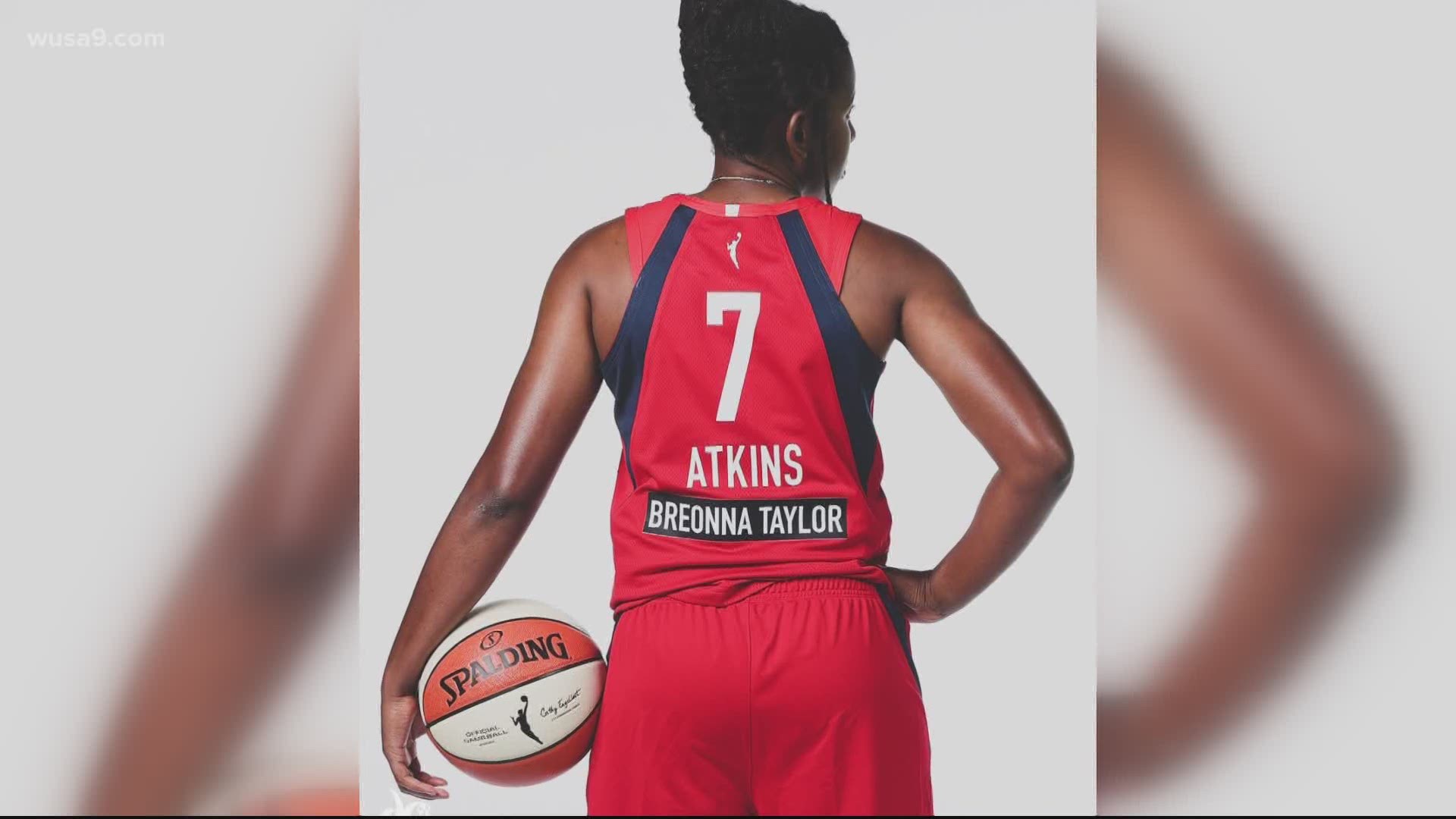 The team has also committed to wearing warmup shirts that read “Black Lives Matter” on the front and “Say Her Name” on the back. Each player's jersey says Breonna Taylor's name on the back, and the words "Black Lives Matter" are painted on the court.

During Tuesday's game, Mystics players chose to walk off the court before the National Anthem was played, continuing a trend started by players for the New York Liberty and Seattle Storm before Saturday's league opener.

"With everything going on in the world, we feel like there is still social injustice going on. Breonna Taylor’s killers have not been arrested," Mystics forward Aerial Powers said. "So, we decided as a team, and as a unit, that is what we are going to do. We are going to stand up for what is right. We wear these shirts for her [Black Lives Matter t-shirts]. So, that’s why we walked off, and we’ll continue to do that until things have changed."

RELATED: WNBA jerseys to include names of women who died from violence, brutality

The WNBA Players Association also announced the creation of a Social Justice Council, with more than 140 past and present players pushing for change on issues including race, voting rights, LGBTQ advocacy and gun control.

“We are incredibly proud of WNBA players who continue to lead with their inspiring voices and effective actions in the league’s dedicated fight against systemic racism and violence,” WNBA Commissioner Cathy Engelbert said. “Working together with the WNBPA and the teams, the league aims to highlight players’ social justice efforts throughout the 2020 season and beyond. Systemic change can’t happen overnight, but it is our shared responsibility to do everything we can to raise awareness and promote the justice we hope to see in society.”

Mystics guard Natasha Cloud opted out of the season altogether to focus on fighting systemic racism and advocating for social justice.

RELATED: From protesting to making history with Converse, Mystics guard Natasha Cloud is having an impactful 2020