These are the most-read sports stories from 2019

Spoiler alert: They're all about our World Series champions. 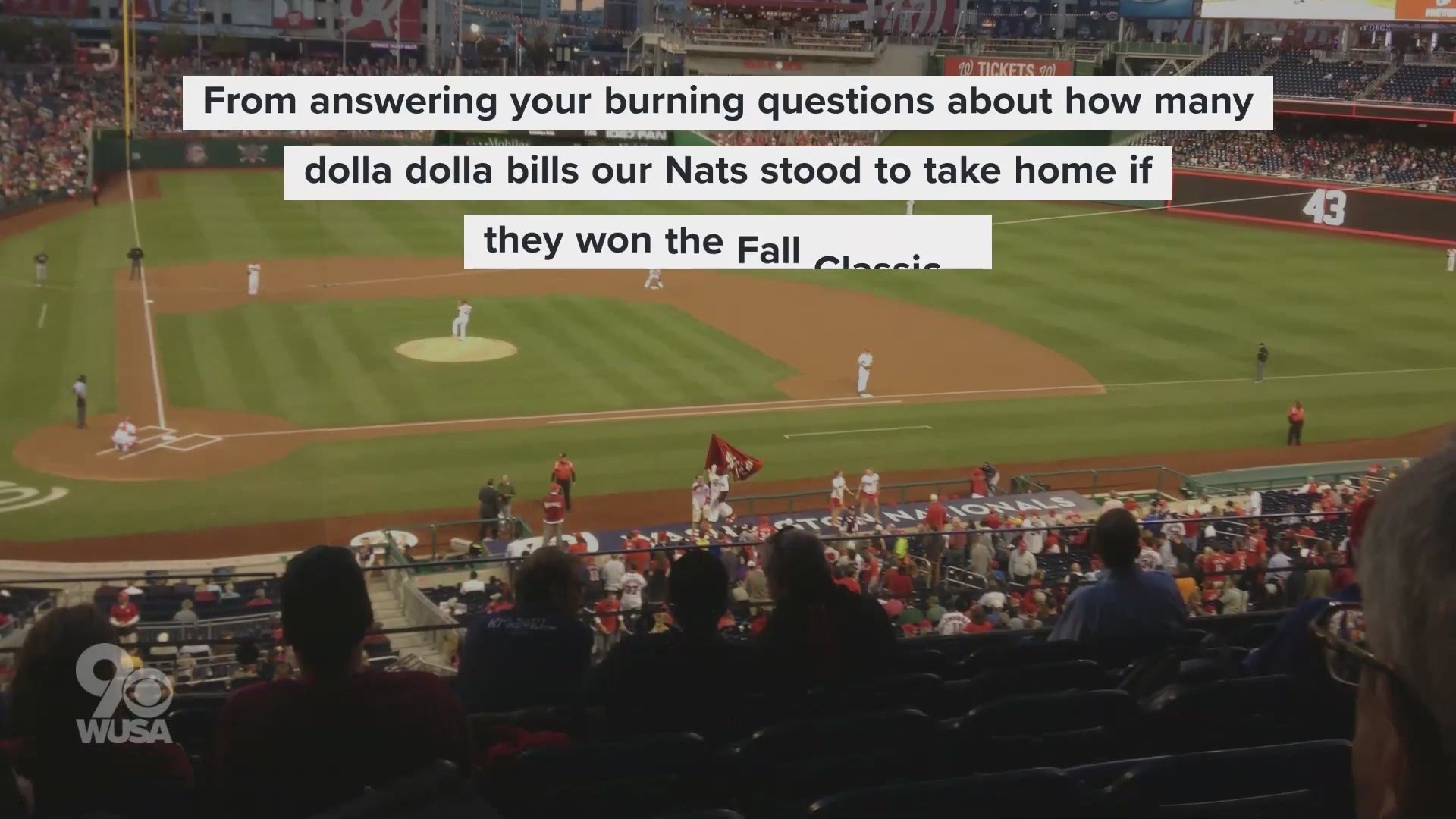 WASHINGTON — If we learned anything about you guys in 2019, it's that you are die-hard Nationals fans -- or you just enjoy jumping on the bandwagon of winning teams.

When we were looking at our analytics to determine the most-read sports stories of the whole year, we realized they had one thing in common: they were all about the newest team to join the District of champions!

From answering your burning questions about how many dolla dolla bills our Nats stood to take home if (when) they won the Fall Classic to giving you the low-down on why President Trump didn't sit with the Lerners when he attended the first MLB game of his presidency, WUSA9 captured every glorious, nail-biting moment of the city's first World Series run in 86 years.

Take a walk down 2019's memory lane with our nine most-seen sports stories.

1. Here's how much money the World Series teams could each take home

World Series Champions get a lot of perks: The Commissioner's Trophy, blinged-out new championship rings, a city-wide parade, and of course, bragging rights that they're the best baseball team in the world.

The champs also get a monetary bump in the form of a bonus called a postseason share.

It's no secret that Nationals pitcher Max Scherzer has quite the arm, but he also has quite an interesting pair of eyes.

Scherzer has a condition called heterochromia iridis, which is the reason his left iris is brown and the right iris is blue.

3. Source: Nationals owners requested they not have to respond to request to sit with President Trump at Game 5

Since he took office in January 2017, President Trump had not attended an MLB game, until he made his first visit to Nationals Park for Game 5 of the World Series.

A representative of the Lerner family, the principal owners of the Nationals, had a special request of the MLB: that they had no desire to be put in a position of turning down a request from the White House for President Trump to sit with Theodore Lerner, 94, the family patriarch, or any other member of the ownership group, a person familiar with the family's thinking told WUSA9 on condition of anonymity.

4. Simone Biles didn't just throw the 1st pitch of Game 2 of the World Series -- she flipped and twisted too

Four-time Olympic gold medalist Simone Biles threw the first pitch for Game 2 of the World Series in Houston. Biles grew up in Spring, Texas, a northern suburb of Houston, which makes her an easy choice to throw for the Astros.

But the 22-year-old gymnastics all-star didn't just throw the first pitch -- she made sure to flip and twist, too, showing off her skills that have earned her 25 gymnastics world championship titles.

RELATED: Simone Biles didn't just throw the 1st pitch of Game 2 of the World Series -- she flipped and twisted, too

5. How to score the best World Series tickets as a Nats superfan

The moment the Nats clinched the NLCS, the most Googled question was "how much do World Series tickets cost?"

The bad news? It cost most people an arm and a leg to witness their team make history.

The good news? WUSA9 was there for you with the breakdown on how to find the few bargain tickets that were available.

RELATED: How to score the best World Series tickets as a Nats superfan

6. The Nationals visited the White House and several teammates were missing

The Washington Nationals celebrated winning the World Series with a trip to the White House, and while several players felt the love, others didn't attend.

RELATED: The Nationals visited the White House, and several teammates were missing

One Washington Nationals fan was faced with a truly impossible decision during Game 6: Catch a home run ball at the World Series, or keep both beers he was holding onto in each hand.

He chose both. Sort of.

8. Here are the 21 best dugout dances of the Nationals season

While dugout dances are usually reserved for home runs -- which Juan Soto had five of in the postseason alone -- we thought the best way to celebrate the outfielder's milestone birthday, would be to show off his teammates' moves.

Here are 21 of the best Nationals dugout dances to celebrate 21 years of Juan Soto, in no particular order.

RELATED: Here are the 21 best dugout dances of the Nationals season

9. Here's who will throw the first pitch at the World Series games this weekend

A scholar-athlete from the Nationals Youth Baseball Academy threw out the first pitch of Game 4, accompanied by Max Scherzer and Anthony Rendon.

RELATED: Here's who will throw the first pitch at the World Series games this weekend

10. Why do Nats fans sing 'Baby Shark' during the games?

It's the song that took over the world in early 2019 -- a show is even expected to come on Netflix. But no one could have predicted the catchy (sometimes annoying) song would take over Nationals Park.

Baby Shark became the city's good luck charm after outfielder Gerardo Parra made it his walk-up song, at the request of his kids, when the team was in a major slump. As crazy as it sounds, it seems like that was the inspiration the team needed to succeed, as they turned a 19-31 starting record into a World Series championship.

So the next time you hear the song, don't get annoyed, just think of the Nats and victory.

RELATED: These were the most popular videos of 2019