The Nationals will head back to Washington with a 2-0 series lead over the Houston Astros in the 2019 World Series. 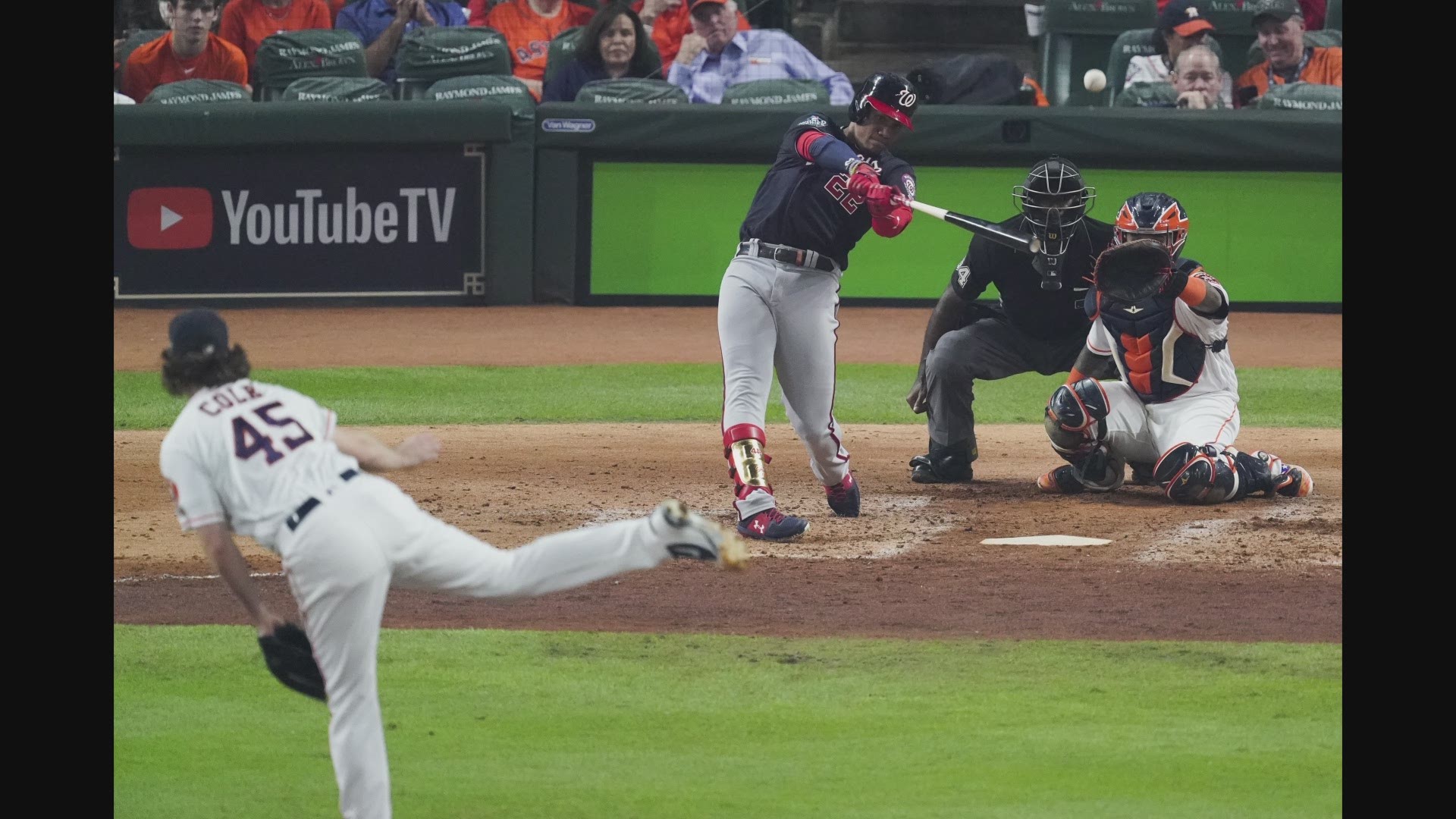 HOUSTON — Through six innings, the Washington Nationals and Houston Astros appeared to be engaged in a World Series classic.

And then a Kurt Suzuki home run off of Justin Verlander in the top of the seventh inning changed everything.

Suzuki's solo shot may have only given the Nationals a 3-2 lead, but it opened the floodgates for what would ultimately be a six-run inning and nine unanswered runs. A game that initially appeared destined to come down to the wire was essentially over by the bottom of the seventh inning, with Washington ultimately walking away with a 12-3 victory.

With the win, the Nationals head back to Washington with a 2-0 lead in the best-of-seven series and the next three scheduled games to take place at Nationals Park. The Nationals -- who have now won their past eight games -- now have five games left to win two in order to capture their first World Series title in franchise history.

What follows is a running recap of the Nationals' Game 2 victory, complete with highlights and analysis.

Martin Maldonado homers off Javy Guerra and George Springer and Jose Altuve each reach base, but it's too little too late as Jake Marisnick grounds out for the final out of the game.

Kurt Suzuki grounds out but Michael Taylor homers off of Chris Devenski to add to the Nationals total heading to the bottom of the ninth.

Three up, three down as Alex Bregman, Yuli Gurriel and Yordan Alvarez go down in order against Tanner Rainey to head to the 9th inning.

Victor Robles reaches first base on a passed ball after a strikeout and proceeds to score on an Adam Eaton 2-run home run off of Josh James.

Asdrubal Cabrera then adds another run to Washington's total, knocking in Juan Soto with a 2-out single.

Fernando Rodney into the game for Washington. He walks Josh Redick to start the inning but forces George Springer into a ground out for the first out and gets Jose Altuve to pop out for the second out and Michael Brantley grounds out to end the inning.

Kurt Suzuki puts the Nationals back on top with a solo home run off of Justin Verlander. The right-hander is then removed from the game for Ryan Pressly after walking Victor Robles, with Trea Turner also walking to give the Nationals two on with no out.

An Adam Eaton sacrifice bunt moves the base-runners to second and third and an Anthony Rendon fly out isn't deep enough to score Robles. After a Juan Soto intentional walk loads the bases, a Howie Kendrick infield single score Robles.

Asdrubal Cabrera then knocks in two more runs with an RBI single and a bad Alex Bregman throw on a Ryan Zimmerman grounder allows two more to score. Houston turns the ball over to Josh James, who gets the long awaited third out on a Suzuki ground out.

Stephen Strasburg forces Alex Bregman into a groundout, but surrenders a double to Yuli Gurriel. Strasburg then intentionally walks Yordan Alvarez. Carlos Correa pops up for the second out and Strasburg strikes out a pinch-hitting Kyles Tucker to end the inning.

Howie Kendrick flies out, Asdrubal Cabrera strikes out and Ryan Zimmerman grounds out for a 1-2-3 inning.

Josh Redick and George Springer ground out to start the inning, but Jose Altuve notches a 2-out single to keep the inning the alive. Michael Brantley flies out to center to end the inning as we head to the sixth still tied up at 2.

Trea Turner singles on a line drive, but Adam Eaton grounds into a double play. After Anthony Rendon walks, Justin Verlander forces Juan Soto into a ground out for out No. 3.

Yordan Alvarez reaches base on a single -- much to the delight of the crowd -- but Carlos Correa grounds out and Robinson Chirinos strikes out to end the inning.

Ryan Zimmerman singles with one out but that's the only damage the Nationals manage to amass as Justin Verlander escapes the inning by lining out Kurt Suzuki and popping out Victor Robles.

Jose Altuve reaches on an error with two outs and Michael Brantley advances him to third with a single, but the Astros are unable to capitalize as Alex Bregman grounds into force out to end the inning.

Juan Soto's World Series hot streak continues with another double, but the Nationals are unable to turn the hit into runs as Howie Kendrick flies out to end the inning.

Three up, three down as Stephen Strasburg forces Yordan Alvarez into a line out and strikes out Carlos Correa and Robinson Chirinos to end the inning.

Justin Verlander allows a one-out hit to Kurt Suzuki, but strikes out Victor Robles and forces Trea Turner to fly out to escape the top of the second unscathed.

Jose Altuve reaches second on a double but gets caught trying to steal third. Nevertheless, the Astros even the score when Michael Brantley singles and Alex Bregman launches a ball over the left field wall.

RELATED: How much do MLB umpires get paid?