This is DC's first taste of the series since the Senators made it in 1933. 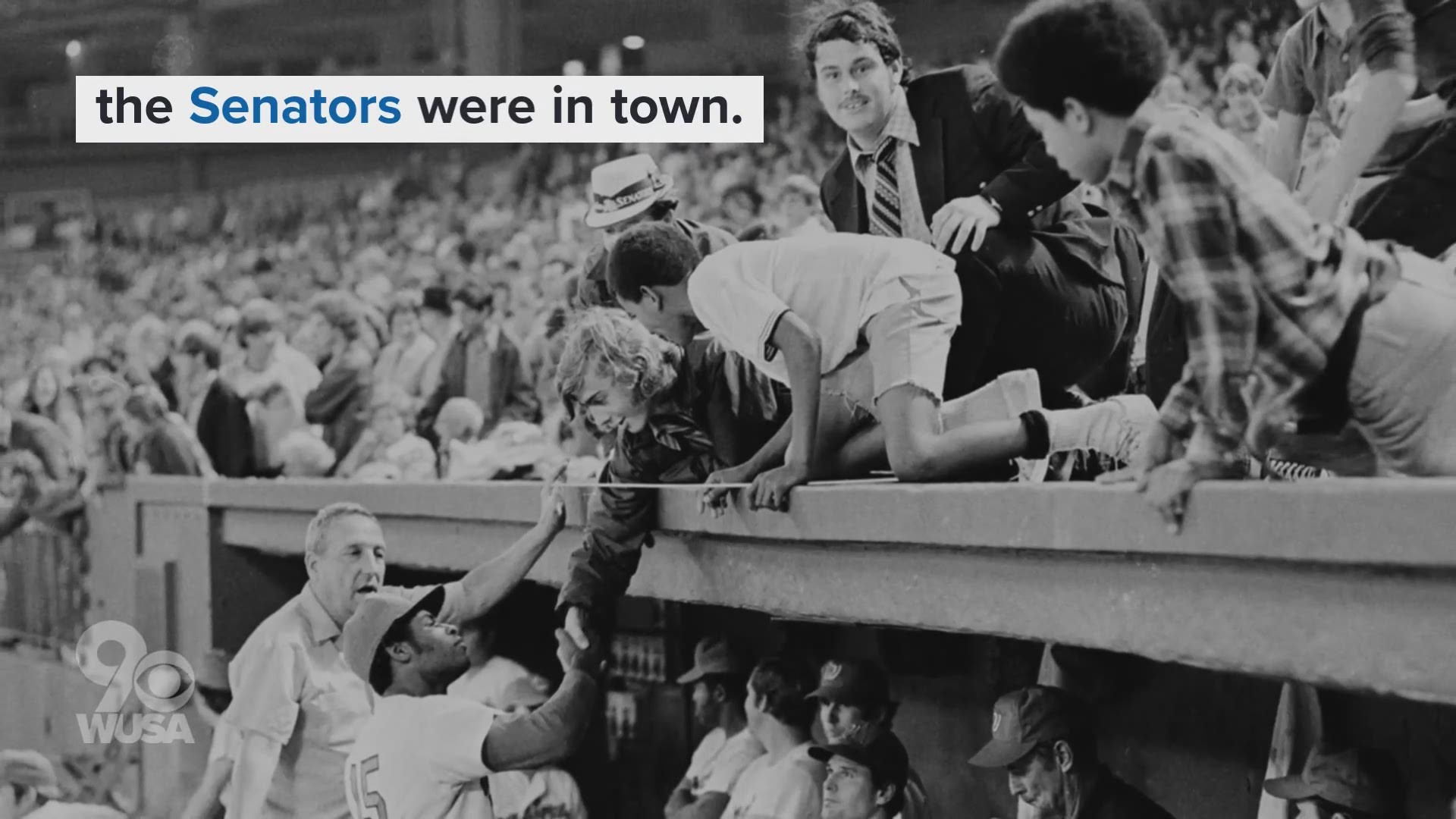 WASHINGTON — When the Washington Nationals punched their ticket to the World Series by sweeping the St. Louis Cardinals in the NLCS, it didn't just mark their first championship appearance in franchise history -- it's also D.C.'s first taste of the series since the Senators made it in 1933.

The team changed its official name to the Washington Nationals in 1905, and the name "Nationals" appeared on the uniforms for two seasons. "Nationals" was replaced with the curly "W" logo for the next 52 years, but the team was still often referred to as The Senators, according to Baseball Reference.

RELATED: What did the world look like the last time DC hosted a World Series?

In 1933, the Senators dueled the New York Giants in the World Series, which ran from Oct. 3 to 7. The Senators ultimately lost the series, 4-1 to the Giants.

President Franklin D. Roosevelt threw out the first pitch of Game 3 on Oct. 5, 1933.

Credit: ASSOCIATED PRESS
President Franklin D. Roosevelt uncorked an almost wild throw that sent the players scrambling, Oct. 5, 1933, at the start of the third game of the World Series in Washington, D.C. Joe Cronin and Bill Terry, managers of the Senators and Giants respectively, are standing beside the Chief Executive. Terry has on the jacket. (AP Photo)

The Senators played at Griffith Stadium, which was named after the Senators' owner -- Clark Griffith. The Senators had Hall of Famers SS Joe Cronin, OF Heinie Manush and OF Goose Goslin on the team, according to Baseball Reference.

Cronin was also their manager -- called a player-manager -- which was common then, but rarely happens now.

RELATED: VERIFY: How to make sure your World Series ticket is legit

Credit: AP
FILE- In this Sept. 20, 1933, file photo, Washington Senators owner Clark Griffith, left, poses with his youthful player-manager, Joe Cronin in New York. In clinching a playoff spot, the Nationals put the nation's capital in baseball's postseason for the first time in nearly 80 years. The Senators lost to the New York Giants in the 1933 World Series. (AP Photo/File)

The 12 top players of the Senators at the time include:

The Senators first moved from D.C. in 1960 to become the Minnesota Twins. Baseball remained in D.C. under a new ownership again as the Senators until 1972. Then the team moved to Arlington to become the Texas Rangers. This left the District empty of baseball until 2004, when the Montreal Expos moved to Navy Yard as the Washington Nationals.

While the Washington Nationals have clinched a spot in the 2019 World Series, no D.C. team has since matched the 99 wins that the Senators had.

Before we had the Nationals, the Washington Senators were in town

1 / 8
ASSOCIATED PRESS
Here's the big "pinch" in the second World Series game Mel Ott is on first, Bill Terry on second and Hughie Critz is on third. Lefty O'Doul is at bat. Score is one to no in favor of the Senators and it's the last half of the sixth. O'Doul smashes a long single to center that bought Critz and Terry home with the runs that tied and won the game on Oct. 4, 1933. Before the Giants were though that inning, however, they pushed across four more runs and knocked Crowder out of the box. It was one of the best rallies in any World Series game. (AP Photo)