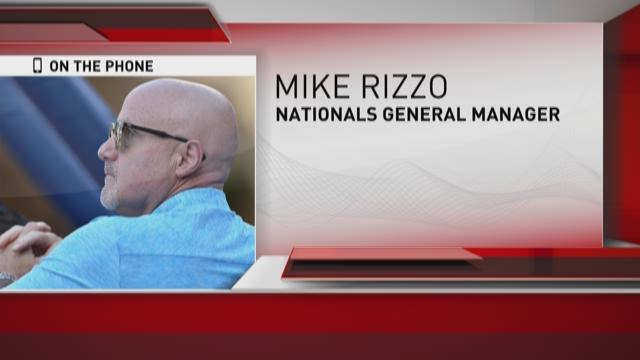 "Our expectations have grown," Rizzo said during a conference call with reporters. "Winning a lot of regular-season games and winning divisions are not enough. Our goal is to win a world championship and, to that end, we made the decision late last night."

Rizzo declined to say why he believes Baker can't help reach that goal.

The GM also wouldn't offer any specifics about what sort of manager he will be looking for as a replacement. The Nationals will be hiring their sixth manager in a 10-season span.

Rizzo called the split from Baker "a pure baseball decision" and said it was not about an inability to reach a new deal with the skipper.

"This had absolutely nothing to do with negotiations, dollars," Rizzo said. "It was not a negotiation with Dusty."

The contracts for the members of Baker's coaching staff also are finished. The team said it will work with its new manager to fill those positions.

"I think Dusty's great. The whole coaching staff. ... They do such a good job of making sure they relate to us. That's a great group of guys in there. They're just as much deserving of the success we've had as we are. They probably work harder than us, to be honest with you," first baseman Ryan Zimmerman said last week. "I think everyone in this room would love to have them back."

The moves come the week after Washington was eliminated from its NL Division Series against the Chicago Cubs with a 9-8 loss at home in Game 5 — and Baker was front and center during a PR debacle involving whether Stephen Strasburg would pitch in Game 4 of that series. The Nationals were bounced from the postseason in the NLDS round in 2016 against the Los Angeles Dodgers; that one also ended with a Game 5 loss at home by one run.

Baker's teams have now lost 10 consecutive games with a chance to advance in the postseason. His career postseason record as a manager is 23-32.

With Rizzo as GM, the Nationals have won four division titles since 2012 but have yet to win a playoff series.

Other teams currently looking for a manager include two other members of the NL East: the New York Mets and the Philadelphia Phillies.

This outcome, essentially, is what Baker was worried about as far back as spring training in February, when he made clear his desire for a new contract, knowing his was up after 2017.

Before the series against the Cubs began, Baker was asked about his possible future in Washington.

"I've given some thought to some things, but we were told that we were waiting until after the season to make a determination," he said at the time. "There's a good chance I'll be back."

Rizzo, meanwhile, sounded a similar note before the NLDS, saying then: "We're both confident that he'll be back with us, but we haven't had any conversations about it."

But Rizzo said Friday that he and the Nationals' owners thought that "after Game 5, this was the right decision to make."

Despite a host of injuries to key players, including 2015 NL MVP Bryce Harper, the Nationals went 97-65 this season, finishing 20 games out in front in their division.

In 2016, Baker's first in Washington, the club was 95-67, and he finished third in voting for NL Manager of the Year.

In all, the 68-year-old has spent 22 seasons as a big league manager, accumulating more than 1,800 regular-season wins with the San Francisco Giants, Cubs, Cincinnati Reds and Nationals. Baker also was a player in the majors for 19 years.

On Friday, hours after telling him he no longer was wanted in Washington, Rizzo referred to Baker as "a Hall of Fame-type of manager."

Here's the letter from the Lerner family:

Thirteen seasons ago, when baseball returned to D.C., we envisioned passionate fans at Nationals Park every night cheering on the hometown team. Your energy until the very end of this year’s National League Division Series filled us with pride as we reflected on how far our team and our fanbase have come. As our organization has developed into a perennial contender, you’ve stood by our side — cheering our successes, keeping us honest in our approach to improvement, and celebrating with us as we’ve captured four NL East Division titles in the last six seasons.

Together, we’ve brought competitive, winning baseball back to Washington with a passionate fanbase that every team in the Major Leagues would be proud to call its own. More than anything, we want to share with you the elation of the final out going in our favor, when we can finally bring a championship home to Washington. That “One Pursuit” is the core driving force behind everything we do, from the first day of Spring Training to the last out of the final game.

Even though this ultimately wasn’t our season, we remain devoted to that cause. In further pursuit of that goal, we have decided to make a change in leadership and begin the process of finding a new manager. This was an incredibly difficult decision for us. Dusty Baker led the team to the first back-to-back division titles in our history and represented our club with class on and off the field. He is one of the true gentleman in our sport, and we thank him for the successes that we enjoyed together over the last two years. We wish him nothing but the best going forward.

To all of you who came to see us at Nationals Park this year, and to the millions more who experienced our games on television, radio, or your mobile devices, we thank you from the bottom of our hearts. You are the lifeblood of our organization, and you give us a reason to strive for greatness each night. Your enthusiasm and shared love of the Nationals has not gone unnoticed. And deep down, we know that one day soon we will all line the streets of our great city together as we celebrate reaching our ultimate goal.

Thank you for your unwavering, passionate support. We can’t wait to see you at Spring Training in West Palm Beach and on Opening Day at Nationals Park April 5.