WEST PALM BEACH, Fla. — The Washington Nationals have headed south for spring training, and as the defending World Series champions, the team has a lot going on to start its stint in West Palm Beach, Florida.

While catchers and pitchers have already been in Florida for more than a week, here are the top-five headlines going into the 2020 season and spring training, as the rest of the Nationals players head to the Sunshine State.

1. Can the Nationals Repeat?

Over the course of baseball’s long history, only 14 teams have won in back-to-back years.

The last team to do it, was 20 years ago! This is when the Yankees put together a three-peat that started in 1998.

According to BetOnline, the Nationals have only the seventh-best odds (+1600) this season to win the World Series, with the Yankees and Dodgers being the top two teams picked to win it all.

If you look at the four major American sports, since 1967 (Super-Bowl era), the toughest league to repeat as champions is in Major League Baseball (MLB).

So, why is it so hard to win back-to-back World Series titles?

Well, in baseball, a single player’s impact just doesn’t go as far as in other sports. In a sport like football, the success of a team can sometimes be decided by the play of a single quarterback or in basketball a single player can take over a game like a Kobe Bryant, Michael Jordan, or LeBron James.

However, a lot can change over the course of a 162-game baseball season.

The Nationals were one of the worst teams in baseball on May 24, 2019, yet they went on to win it all. So, becoming the 15th team to win back-to-back World Series titles is hard, but not impossible. 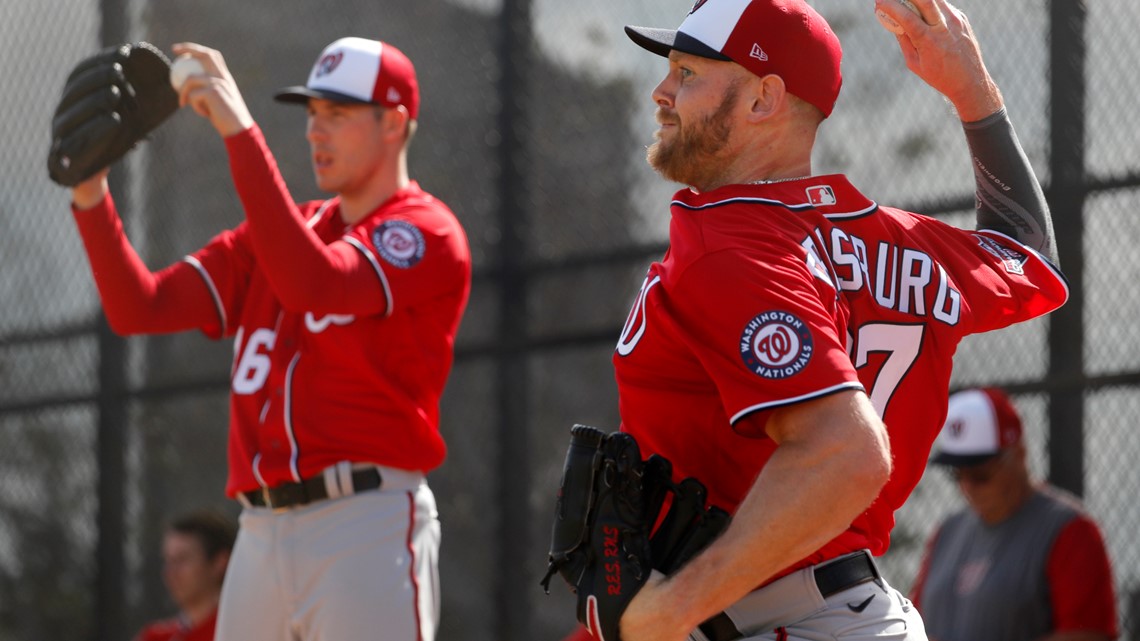 2. The Nationals lost a big star but they kept another

A year after Bryce Harper left to join the Phillies, Anthony Rendon walked away from Washington this offseason and signed with the Los Angeles Angels.

Rendon leads the Nats' franchise record in runs and runs batted in (RBIs), while tying for first in home runs. A reason why Rendon was a National League MVP finalist last season.

He signed a seven-year $245 million deal this winter, which is one of the richest contracts for a pitcher in MLB history.

And finally, joining the Nationals this season, are some new but familiar faces:

He was the Houston Astros pitcher who gave up Howie Kendrick's big home run late in Game 7 of the World Series. He’ll try to improve a Nats' bullpen that was one of the worst in baseball last season.

And while playing for Milwaukee, Eric Thames hit a home run off Max Scherzer in last year’s Wild Card game. This year, the two will be teammates, with Thames looking to bring some experience to the team as a quality bench player.

If the Nationals can make another run in the playoffs this season, Thames may become a fan favorite for his locker room celebrations.

3. What will happen with the Baby Shark song?

Just to get it out of the way first, no more "Baby Shark" song.

Gerardo Parra, who used the children’s song during his walk-up music, signed a 1-year deal to play in Japan this year.

Does this mean that the song will no longer be used in general by the team? Who knows? But with a new season comes new songs, new traditions, and hopefully, more winning ways.

While Dusty Baker is no longer in a Washington Nationals uniform, it will be hard for the former team manager not to cross paths with his former employer.

Baker, who coached the Nationals for two seasons from 2016 to 2017, is now with the Houston Astors, who share the same facility in the Grapefruit League with Washington.

This means both teams, who played each other in the World Series, will have a little more during spring training to perhaps talk about. This will include the Astros sign-stealing controversy that has rocked Major League Baseball since the beginning of the season.

Baker has already called for the MLB to protect his players from bean balls, with speculations and concerns that teams will try to go after players they believed took part in the sign-stealing practice that led to Houston firing its former general manager and coach back in January.

Thank you, Dave Martinez, for bringing a World Series to D.C., but now it's time to see how the 55-year-old coach will do in his third season leading Washington.

Martinez has had an up-and-down two years with the Nationals, and goes into the last season of his three-year deal, which does include a club option for 2021.

While he has won a World Series, Martinez had an average 2018 season, and without the heroics of last season, he would have faced questions about his position with the team.

Martinez's health is also something to keep an eye on this season. In September 2019, he underwent a cardiac catheterization after experiencing chest pains during a game.

So far his record as the Nationals manager in 324 games is 175-149. In two seasons under Martinez, Washington has finished second in the National League East Division (NL East) both times.

RELATED: Aaron Barrett and the Nationals are in a Super Bowl commercial