'They made their decision, and I made my decision as well' | Bryce Harper discusses Nats World Series without him

The former Nationals right-fielder shares his thoughts on the team's playoff run and relocating to Philly in an article in The Athletic. 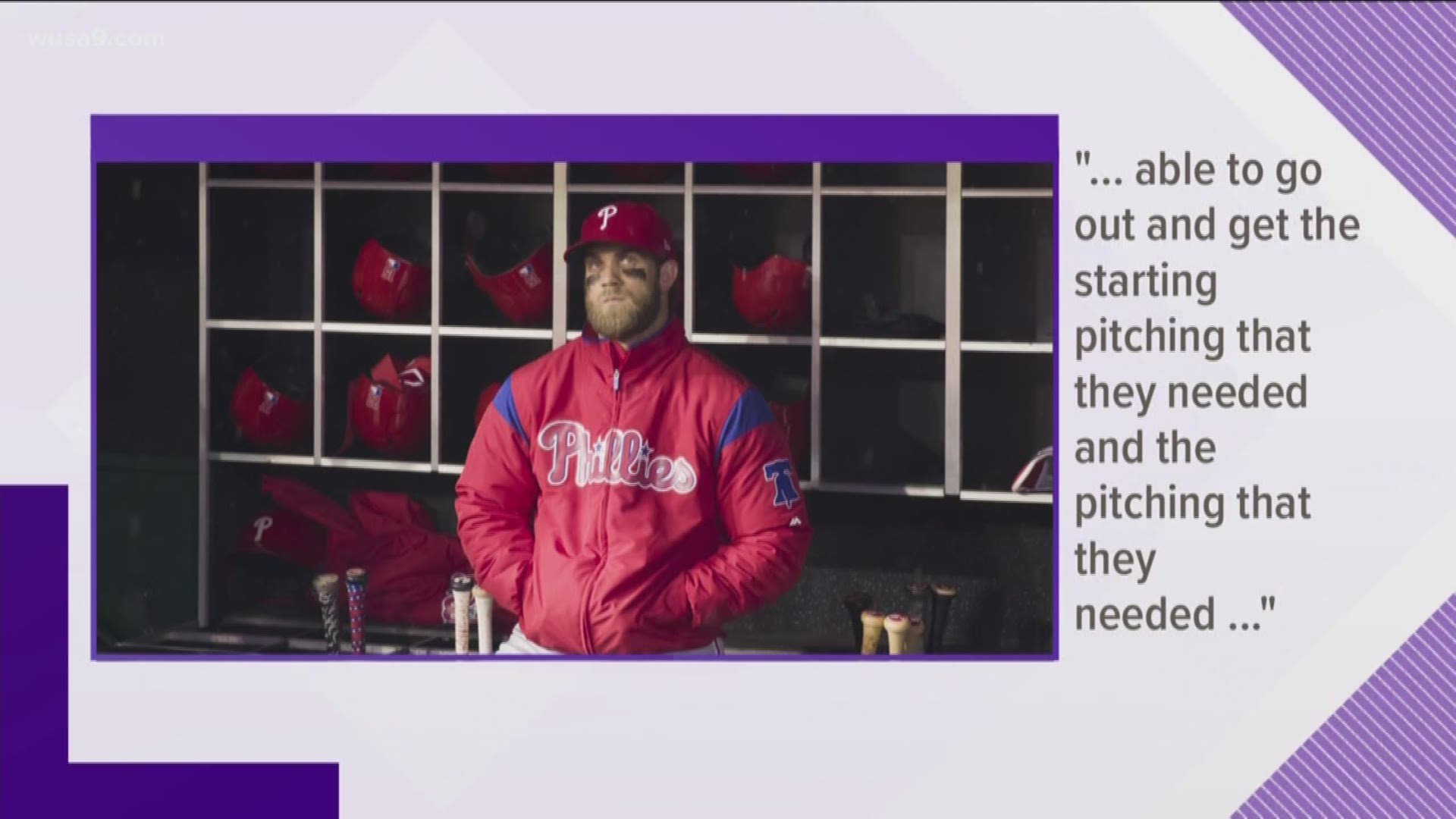 The day before, the Nationals won the National League Championship Series and advanced to the World Series for the first time in team history. To some, the two events may seem singular, coincidental. But to other Nationals fans, the timing seemed to represent something more, the ultimate way to end a season without the controversial former player.

So during Tuesday's night's game, many donned former Harper jerseys, masked with DIY duct-tape above his name or scratched out new numbers in replacement.

But how did Harper himself feel about the team's recent advancement to the World Series? How did he feel about no longer being a National?

"They made their decision, and I made my decision as well," Harper told The Athletic's Jayson Stark in an interview released Friday.

Harper recently sat down with Stark to discuss his feelings on the National's recent playoff run and his decision to relocate to Philadelphia.

"I think it’s about being able to be the person that I am,” Harper said. "And not saying to myself, 'Oh my gosh, I can’t believe I’m not a National.' Or, 'Oh my gosh, those guys are doing what they’re doing. I can’t believe it. I’m so jealous.' No. I’m so happy for them. You know how hard it is to get into the postseason and win games. For them to be able to put it together this year the way they have, it’s an amazing thing."

Harper left the Nationals in the offseason after playing seven seasons in Washington. He signed a 13-year, $330 million contract with the Phillies, and instead of resigning Harper, the Nats decided to add Patrick Corbin and Anibal Sanchez to their rosters.

Harper said that the decision to boost up the team's pitching, combined with the team's more affordable outfield, helped the Nationals this season.

The Nationals will either play the Houston Astros or the New York Yankees for the 2019 World Series. The first game of the series will kick off Tuesday, Oct. 22.

As for Harper, he told Stark that he has, in fact, been "watching a lot" of his former team's playoff run and that he has "no hard feelings towards them."

"Those are the guys I played with and came through the organization with … I wish them nothing but the best," Harper said. " And that’s real. I have no hard feelings toward them, or Mike Rizzo, or anything like that. You know, they’re a great team. And that’s why they are where they are."

RELATED: It's Bryce Harper's birthday. We're going to the World Series. You do the math