Can you imagine being a 14-year-old and getting calls from some of the top college coaches in the country because of your athletic talent? 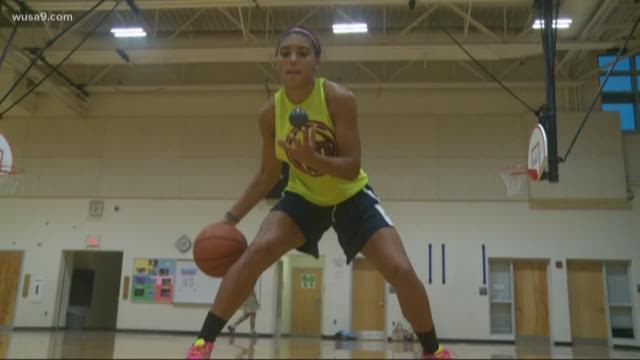 Can you imagine being a 14-year-old and getting calls from some of the top college coaches in the country because of your athletic talent?

Azzi is 5'11", wears a size 11.5 shoe and can flat out ball. She's ranked number one in the entire country. The upbeat freshman is special. Just ask her high school coach.

"We are talking about potentially a once in a generation player," Jonathan Scribner said. "She's got that opportunity in front of her."

By the way, she hasn’t even played a second of high school ball.

Geno Auriemma, the women’s coach for the University of Connecticut has watched her practice. He’s only won 11 national titles so no big deal.

"I was so nervous," the carefree freshman said with a big smile. "When he walked in(to practice) I had to walk the other way. I was like "Oh my gosh, he's really in here."

Don’t let her infectious smile fool you about her game though.

"I feel like I’m a silent assassin on the court. I'm trying to destroy our opponent. I want to win," she said.

Her biggest win: a gold medal this summer for the 16 and under USA team. She was the youngest player on the team and beat out over 100 players.

"I think that really boosted my confidence. In one of my classes, we talked about what we had done over the summer. I said I was on the USA team. Everyone was like "wow really,'" she said.

We are talking rock star status. She even made a friend in the bathroom because of her success.

Althought don't ask her for any autographs just yet.

"I still need to work on my signature," she giggled.

She’s got it all. She’s fast. She’s strong. Her shot is like poetry. Just one fluid single motion. And she can sense things are gonna happen before they do.

"She functions as if she’s three or four years older than her age group," her dad said.

Now, imagine what this is like for her parents. These are two former basketball stars who once saw their daughter drop almost 50 in a game.

"There are certain moments where I’ll grab Tim’s arm or he’ll look at me," Katie Fudd said. "And its like oh my gosh, did you just see that?"

So she must’ve been a prodigy in her first game as a youngster, right?

"I thought she was awful," her mom said with a smile. "He(Tim) thought she was good. The first time she held the ball the girl took it from her. Went out for the layup and she just skipped on down the court."

The physical tools were there as Azzi was born with some natural ability.

But they had to teach her how to be aggressive.

One moment during second grade Azzi got the message.

"There was a loose ball that went out towards half court," Tim said. "The girl Azzi was guarding started sprinting after it. She had about a five yard head start on Azzi. Normally Azzi would've given up on it. This particular time, she locked in on that ball and refused to lose. She sprinted and passed her opponent, scooped it up all in on emotion and speed dribbled the rest of the way for a layup. The look on her face is what I remember the most: a furrowed brow, tight lipped sprint and finish. She was not going to be denied on that play. It was as if she instantly realized that she had another gear and figured out how to shift into that gear."

Azzi would average 25 to 30 points consistently and that was with girls two years older than her. Her first offer came in sixth grade from the University of Maryland and Tim and Katie couldn't believe it.

How did Azzi respond?

"I just said thank you. My parents were like, "that's it? I didn't really process it."

Being a prodigy can be a little challenging on all levels.

"We worry sometimes if we are doing too much," Tim said. "Are we doing the right thing? It takes a lot of time to do this. Sometimes she even outworks us."

For Azzi, visiting colleges before she even had her first high school class is a little overwhelming.

They know high school will be a reality check. Players and others will start to hate her just because she's really good.

But Tim and Katie will be there every step of the way to protect Azzi and make sure she stays on the right path.