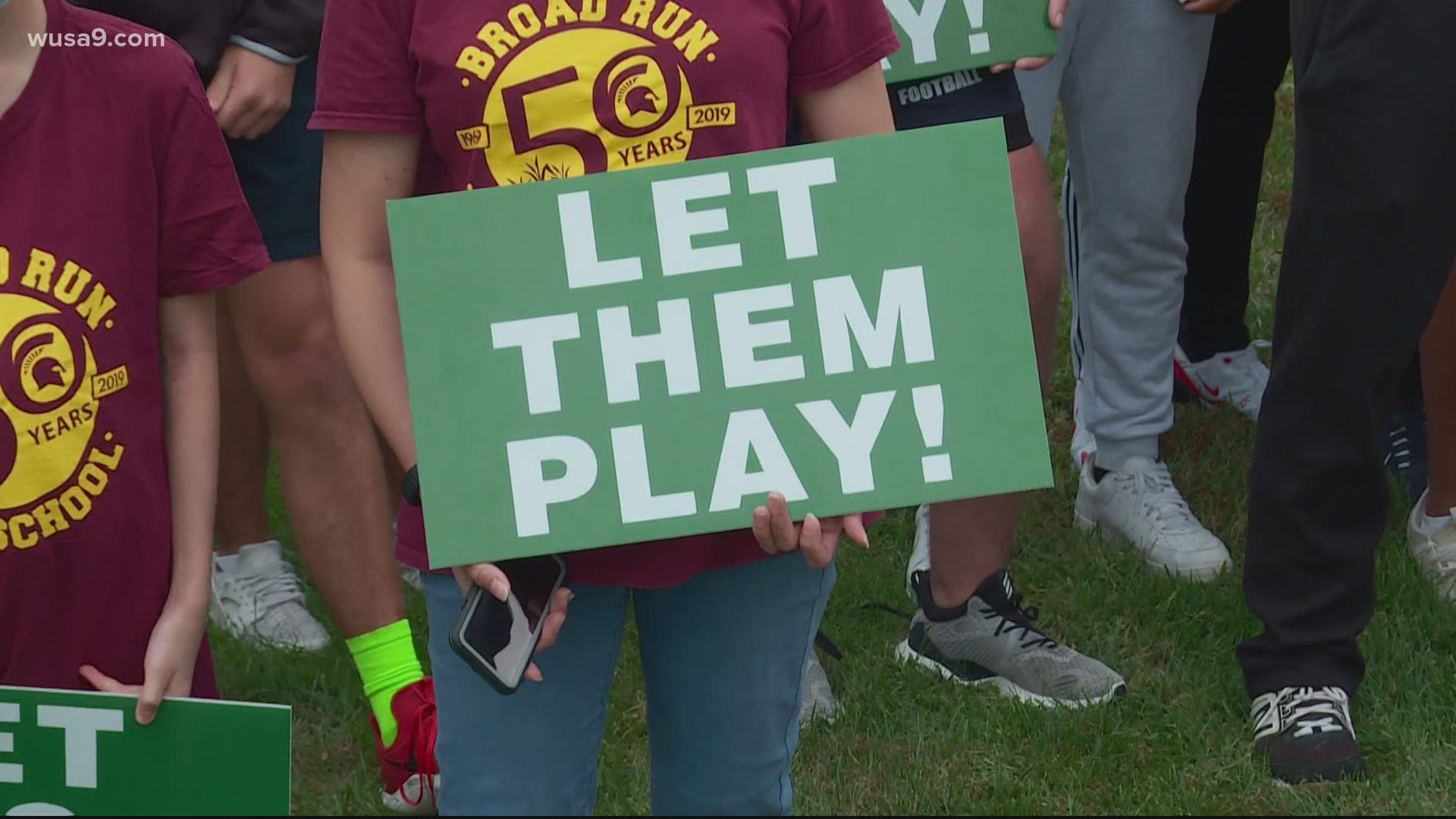 The Virginia High School League (VHSL) says games for fall sports, like football and volleyball, wlll not begin until late February and March due to COVID-19. The VHSL has also ruled student-athletes can play sanctioned games for winter sports, like basketball, gymnastics, and indoor track, in December.

But some Virginia families have argued that it is already safe enough for their children to play organized sports.

Mother Holly Wiles organized a rally named “Let Them Play” in the parking lot of the Loudoun County Public Schools Administration Building. Over a microphone, she said state officials were being hypocritical in their decision to postpone high school sports seasons.

“Virginia is telling us it’s not safe to play high school football, high school lacrosse, high school volleyball, but yet they’re letting people play on our fields,” she said. “Tell me how that even begins to make sense.”

According to the VHSL, school divisions work with local recreation leagues and travel teams to discuss field scheduling. The league says that is a decision usually left up to school boards and counties.

Tristan Leigh, a standout football player at Robinson High School in Fairfax, spoke at the rally as well.

While Leigh is already being recruited by football programs around the country, he said he was worried as to what could happen to some of his teammates if they do not get the ability to play this fall.

“The great players around us in this area need this season to be able to get opportunities to play at the next level,” he said.

Leigh’s mother, Laura Rigney, said she is a frontline worker. She, too, has no problem with seeing her son and his classmates play sports this fall either.

The VHSL released a statement Friday regarding the Loudoun County rally. The interscholastic athletic sanctioning organization said it and its member schools have worked tirelessly over the past several months to create a plan that ensures every VHSL sponsored activity happens in the 2020-2021 school year.

“We fully understand and support the passion of high school sports from our school communities, parents, and students,” the statement reads. “From day one, we have been committed to getting our students participating in activities safely and responsibly. There has been a tremendous amount of input and cooperation from principals, superintendents, activity directors, coaches, and members of various communities.”

VHSL added that its staff, executive committee, and sports medicine advisory committee are working to develop a list of recommended guidelines for school divisions as they prepare to play sports later this year.

“VHSL staff and Executive Committee will continue to work in cooperation the VHSL Sports Medicine Advisory Committee (SMAC) to develop a list of recommended guidelines for school divisions as they prepare for the safe reopening of high school sports and activities.”

Maryland Governor Larry Hogan and Maryland State Superintendent of Schools Dr. Karen Salmon announced Thursday all schools in their state would be allowed to conduct practices for fall sports as early as Oct. 7.

The VHSL points out that it does allow for out-of-season practices right now as this is the offseason for high school sports. The league says it is up to school districts if they will allow their teams to practice or not.