From boycotting games to utilizing practice time for racial discussions, teams around the District are finding ways to make a stand. 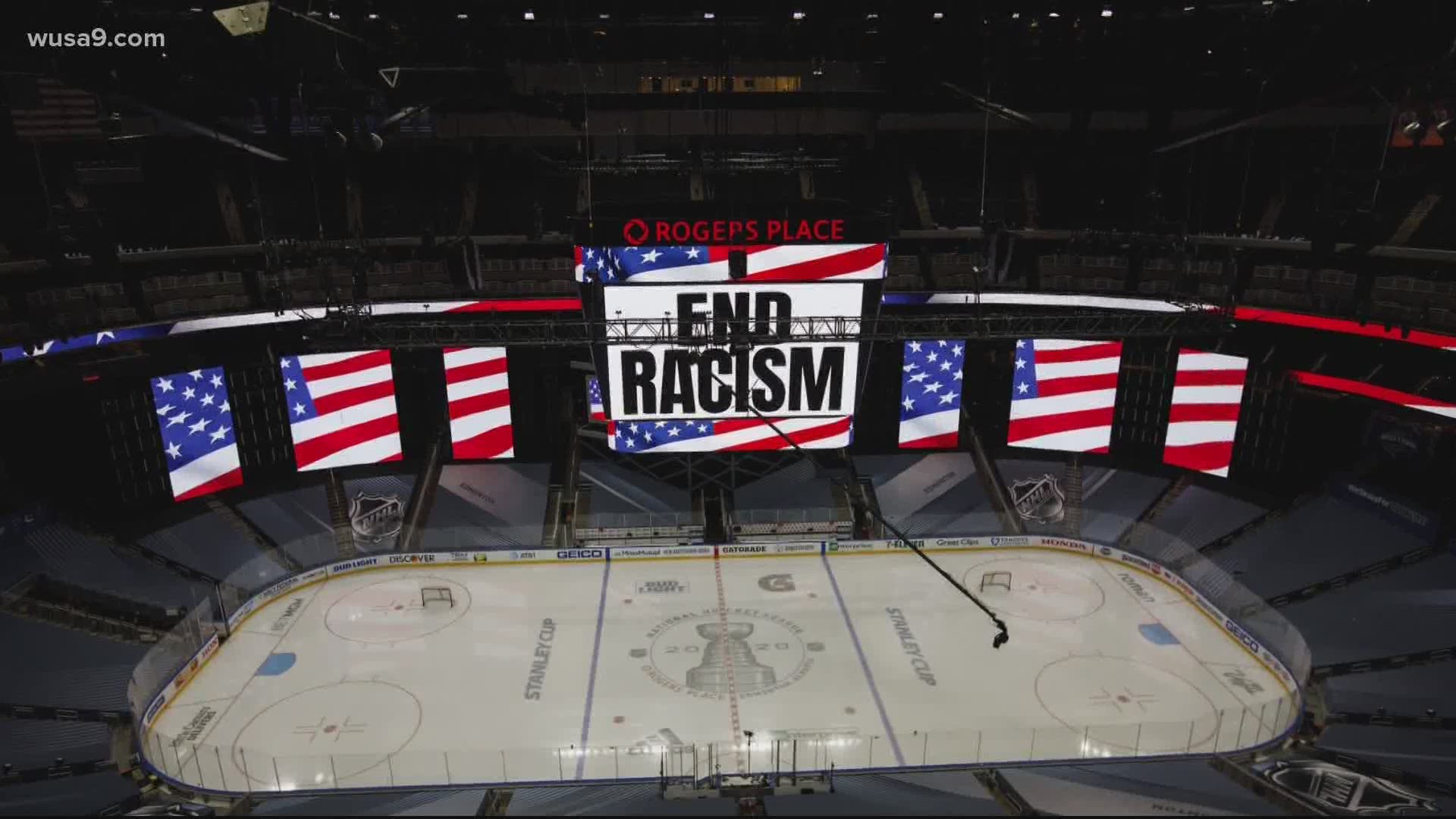 WASHINGTON — After 29-year-old Jacob Blake was shot seven times in Kenosha, Wisconsin by police last week, a wave of rally cries from sports teams in almost every league set off immediately.

Playoff games were halted as teams across the country began boycotting, athletes wearing justice emblazoned jerseys as they continued to express themselves -- and their current stance on the country.

Including those within District.

Just days before the March on Washington is expected to kick-off at the National Mall, with protests and rallies continuing to call for equality, multiple teams and dozens of District athletes began to speak out.

Vowing for social justice, for equal treatment, and perhaps most of all: for acknowledgment at the seriousness of the issue, in what seems to become a disturbing trend in an already unconventional year.

On Thursday, the Washington Football Team announced they would be canceling their morning practice to have "an open dialogue" on the issues of racism and social injustice in the country, joining seven other teams in the league who are joining with similar initiatives.

"Friday we can return to football," a statement from the team read. "But tomorrow will be about reflection instead."

The Washington Football team just cancelled Thursday’s practice to have an open dialogue on the issues of racism and social injustice in our country. @wusa9 @WUSA9sports pic.twitter.com/gccYinctE3

Head coach Ron Rivera has previously shared his support for the movement earlier in June, noting there still is work that needs to be done.

"We’re not just basketball players, and if you think we are, then don’t watch us," Washington Mystics guard Ariel Atkins said on the court Thursday.

It's not the first time the Mystics have spoken out against the injustice, wearing gear with Breonna Taylor's jersey since the unconventional season started.

"Part of what I said to them was that you understand we have been wearing Breonna Taylor's name on the back of jerseys since we've been here and her murder occurred five months ago... and nothing has really changed in Kentucky," head coach Mike Thibault said when discussing the reasons behind their activism.

"I don't know if we're going to change anything in Wisconsin, they're clearly not paying attention to anybody in Breonna Taylor's case, but I still believe it's the right thing to stay with the topic and stay with it. "

Thibault mentioned the calls for justice go beyond the Mystics, noting there are 140+ players in the league and a "broader discussion in the league" about the issues.

Never thought I would paint bullet holes on the back of a T-shirt. 7 gunshots in the back. This happened to a human being in real life. A Black Man. How many more? #BlackLivesMatter pic.twitter.com/6wtjez0aOa

While the Wizards are not in the league's bubble, the league as a whole announced they would be postponing playoff games after the Milwaukee Bucks sparked the movement earlier in the day when they refused to play against the Orlando Magic.

The Wizards shared their own support for the Mystics on social media, with players like John Wall posting urges for social justice and tweeting that "we will no longer shut up and dribble."

On Thursday afternoon, the Nationals announced they would be postponing their game against the Phillies to "call attention to the racial and social injustice in the country." The game was slated for Thursday night at 7:05 p.m.

The Nationals also shared a photo amid Wednesday's postponing: an empty Nationals Park, with 'Justice Equality Now' in bright white letters on the scoreboard.

"We need change," they wrote, attributing the words to Davey Martinez.

“Given the pain in the communities of Wisconsin and beyond following the shooting of Jacob Blake, we respect the decisions of a number of players not to play tonight," the MLB said in a statement. “Major League Baseball remains united for change in our society and we will be allies in the fight to end racism and injustice."

The NHL has not released an official statement about the league's position on the protests, nor have the Capitals released a statement.

Several players have used social media to express their outrage at the league's silence, including San Jose Shark's Evander Kane.

"It's incredibly insulting as a black man in hockey the lack of action and acknowledgment from the NHL, just straight-up insulting."

Actually it’s incredibly insulting as a black man in hockey the lack of action and acknowledgement from the @nhl, just straight up insulting. https://t.co/1KrpUvFhaQ

Two more playoff games are scheduled Thursday night for the league: Philadelphia vs New York in Toronto, and Las Vegas and Vancouver in Edmonton. Both games are expected to continue as normally scheduled.

Credit: AP
An empty court and bench are shown following the scheduled start time of Game 5 of an NBA basketball first-round playoff series, Wednesday, Aug. 26, 2020, in Lake Buena Vista, Fla. All three NBA playoff games scheduled for Wednesday were postponed, with players around the league choosing to boycott in their strongest statement yet against racial injustice. (Kevin C. Cox/Pool Photo via AP)

So, with just one day before a monumental march advocating for equality, DC athletes continue to raise their voices. They share their thoughts boldly, on sneakers and jerseys, in locker room interviews, and social media shares.

They use their platforms to demand change, to league officials and to all those watching, as protests continue into September.

Back in July, Nationals All-Star Sean Doolittle spoke to reporters about the various roadblocks in bringing sports back, especially in times of upheaval.

"I am not sure," he said to the gaggle of press on July 5. “Sports are like the reward of a functioning society.”