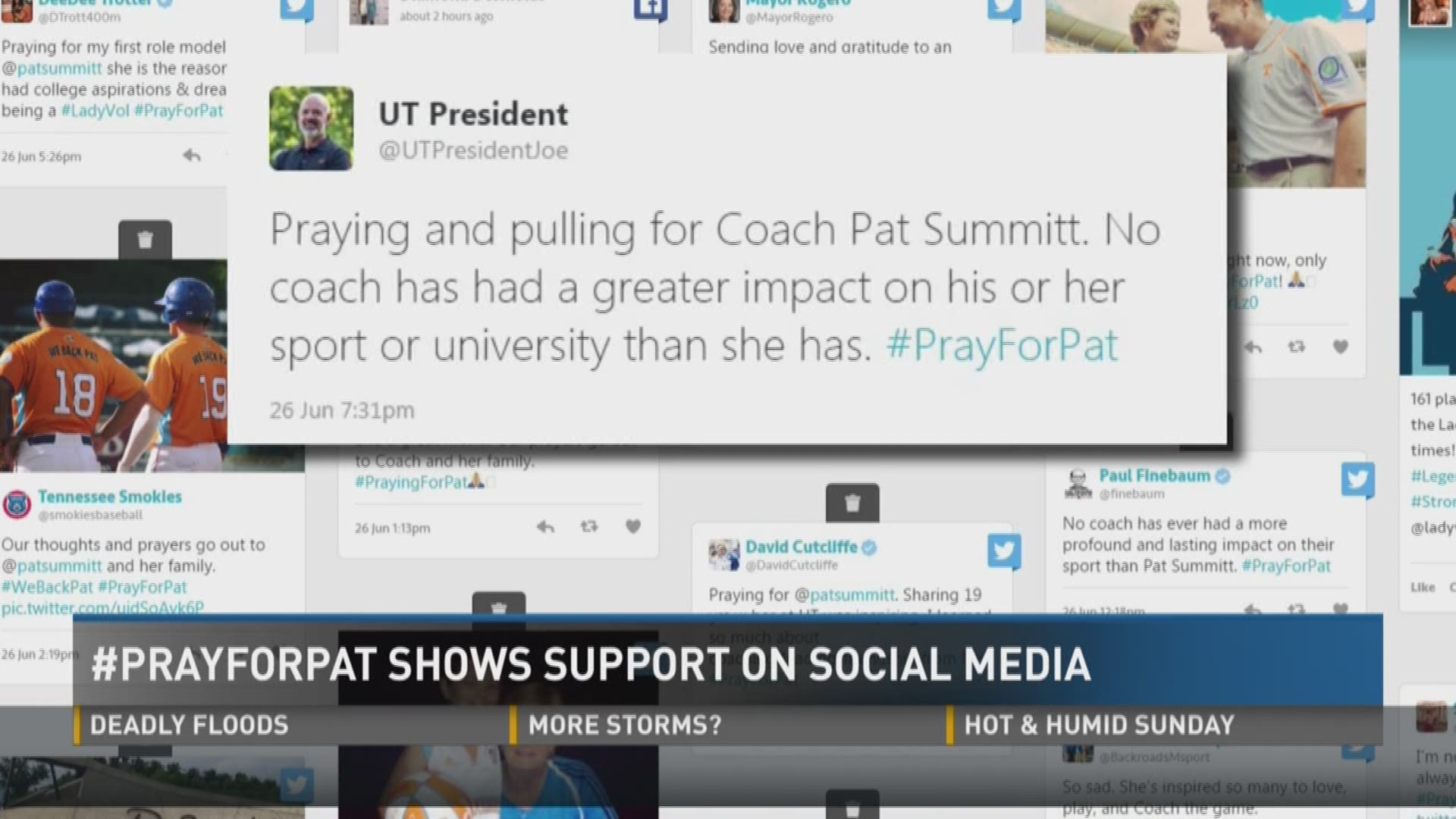 Multiple sources confirm to 10News that Summitt is not doing well, and her family and friends are preparing to say goodbye.

The Pat Summitt Foundation put out the following statement on its website Sunday morning:

On behalf of Pat Summitt’s family, we acknowledge the past few days have been difficult for Pat as her early onset dementia, ‘Alzheimer’s Type,’ progresses. She is surrounded by those who mean the most to her and during this time, we ask for prayers for Pat and her family and friends, as well as your utmost respect and privacy. Thank you.

Many are using #PrayForPat on social media.

Can't find the words right now, only thing I can say is #PrayForPat! 🙏🏽 pic.twitter.com/ujUqzcrLz0

There is no greater love than an expectation and a hug! That's what Pat held me to....U know my ❤️ for u will never falter.

No coach has ever had a more profound and lasting impact on their sport than Pat Summitt. #PrayForPat

Pat, you are in my thoughts & prayers. My dear trusted friend,May God be with you & your family. Your legacy will live forever. #PrayForPat

Praying for @patsummitt. Sharing 19 yrs w her at UT was inspiring. I learned so much about coaching/leading/friendship from her #PrayForPat

Hope you don't mind that I ask for prayers for a dear friend close to the end of her journey. Would mean a lot to her fam, Peace be w/ you❤️

We are ALL praying trust me. My heart is full of love. @RobinRoberts https://t.co/kJ3OesiEDF

One of the Best coaches of all time- and a great friend! Our prayers go out to Coach and her family. #PrayingForPat🙏🏽

Her fight is our fight.

All prayers and good thoughts to @patsummitt ,her family, friends, the Lady Vols, and Vols family...blessed and honored to know "Coach Pat!"

Praying and pulling for Coach Pat Summitt. No coach has had a greater impact on his or her sport or university than she has. #PrayForPat

One of the nicest, most giving and classiest people I have ever had the pleasure of knowing. So hard to fathom this. #PrayForPat

Sending love and gratitude to an inspiring woman and great leader. @patsummitt https://t.co/edaryyOi8b

Prayers up for The Great Pat Summitt...praying for the family as well. #PrayForPat #SMH #ThisDiseaseIsTheDevil

A legend, a mother, a friend. My thoughts and prayers to @patsummitt and family during this difficult time. #PrayForPat

Love & support to Pat Summit, her family & loved ones. #PrayForPat

Praying🙏🏾 this Sunday morning for Coach Pat Summitt who's reportedly in hospital in critical condition. An awesome coach and better person💯

For multiple generations, Pat Summitt has been among most universally admired people in sports. Wishing the best to her family and friends.