Galen Alexander and Myron Gardner are the third and fourth players in the last two weeks to announce their exit from the program. 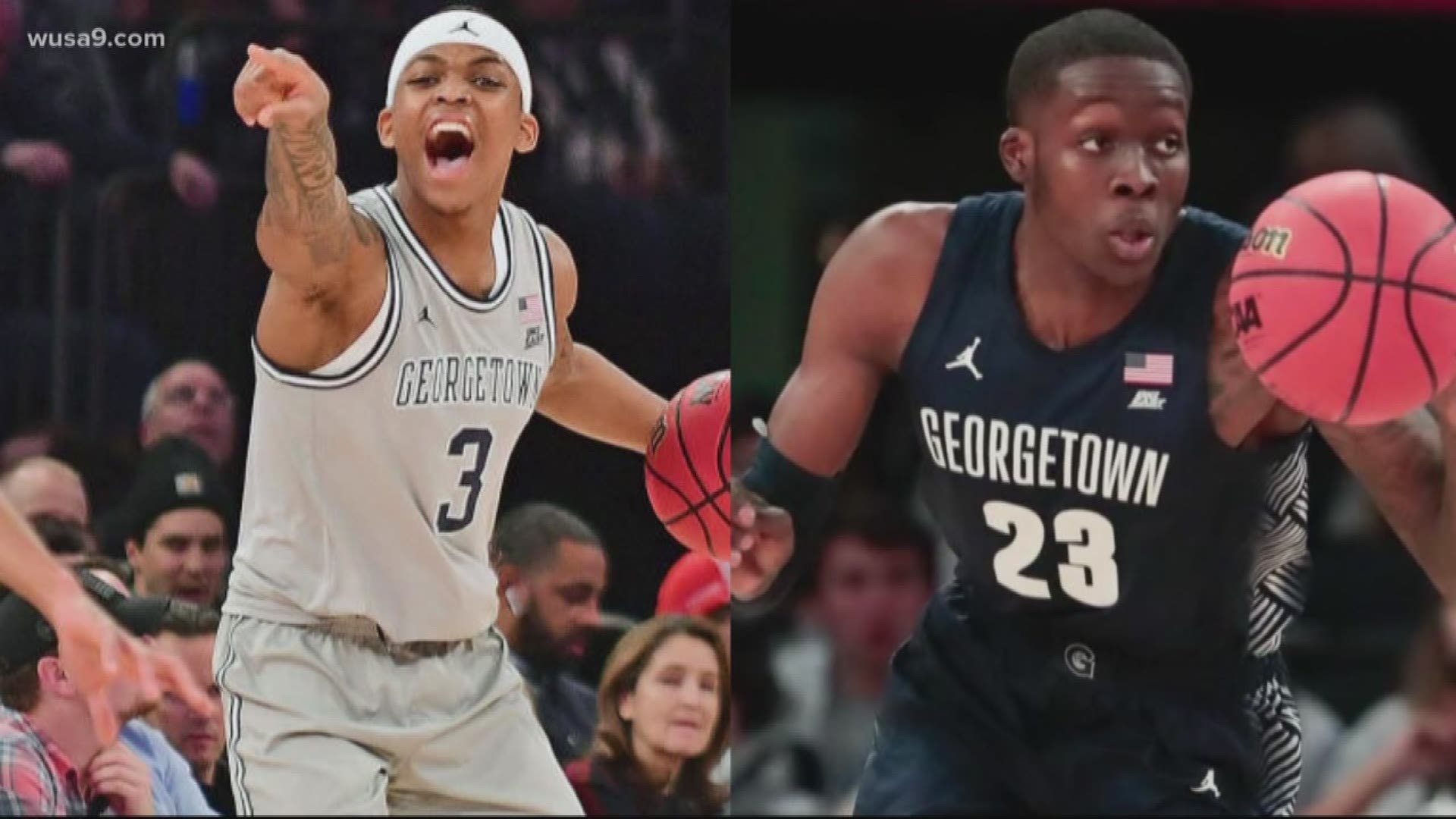 WASHINGTON — Two more Georgetown basketball players have announced they are leaving the university amidst allegations in a civil complaint by a fellow student involving sexual harassment, assault, and burglary.

Galen Alexander and Myron Gardner, two forwards on the Georgetown University basketball team, announced Friday that they expect to transfer from the university.

Alexander posted his announcement of his transfer to Twitter, while Gardner announced his decision in a statement to The Washington Post. The University made the official announcement late Friday.

"I have been publicly shamed, threatened, and criminalized. I have been falsely accused and targeted by the media and my peers of crimes I did not commit," Alexander said in his Twitter post. "My family and I have decided that Georgetown is not the environment for me to successfully grow as both an individual and as a basketball player."

Alexander and Gardner are the third and fourth players in the last two weeks to announce their exit from the program.

Point guard James Akinjo and forward Josh LeBlanc were removed on Dec. 2 in an announcement by the university, after three Georgetown players were named in complaints in D.C. Superior Court -- in which the players were facing accusations of harassment and burglary.

Lee Reed, Georgetown's athletic director, sent a letter to Hoya basketball supporters indicating Akinjo and LeBlanc were removed from the team because they "expressed an interest in transferring from the University."

LeBlanc, who transferred last week, and Alexander both received restraining orders back in Nov. 2019.

In the civil complaint, a Georgetown University student accused LeBlanc of sexual misconduct and burglary. The accuser alleged, "there were threats to my personal safety and well-being."

The accuser also said that she fears for her safety from Galen Alexander, a person she identified in the filed complaint as LeBlanc's best friend and member of the Georgetown basketball team.

LeBlanc's accuser said in the filed complaint that her roommates would also be filing their own temporary restraining orders.

In another civil complaint filed in D.C. Superior Court, a student accused Gardner of sexual harassment, assault, threat to do bodily harm and burglary. The accuser alleges that Gardner was threatening and harassing her at her home.

WUSA9 reached out to LeBlanc's accuser and she told us she's OK, and that she did not want to talk about the situation further.

It is unclear if the court filings are related to LeBlanc's removal from the university's basketball team.

A week after reports surfaced of the players hit with the temporary restraining orders, WUSA9 obtained a letter signed and dated by 68 Georgetown faculty members, all of whom detail their extreme displeasure with how the university has handled assault, sexual misconduct and intimidation allegations against the players.

"The silence from university leadership in the past week illuminates the reasons for students' lack of confidence, which can only be counteracted with a clear statement immediately," the letter reads.

The letter was circulated among the faculty the past 24 hours and was sent to the office of President DeGioia on Thursday, a person familiar with the process said, who communicated on condition of anonymity.