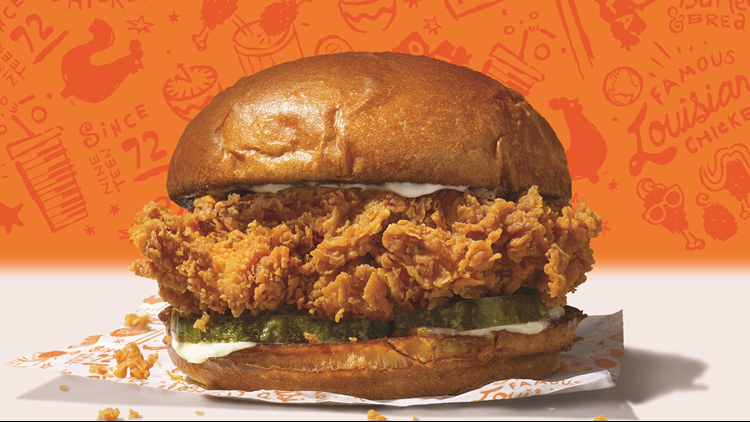 Verifying the franchise's news that sandwich requests would be granted to customers bringing in their own bun, one manager in D.C. went beyond the call of duty
Author: Mike Wise
Published: 8:37 PM EDT September 12, 2019
Updated: 5:57 PM EDT September 20, 2019

WASHINGTON — In early September, a month after Popeyes dropped Beyonce's "Lemonade" of chicken sandwiches, a man pulled a gun on employees at a Houston chain when they ran out of their fried, savory patties of perfect poultry.

I know what you're thinking: "It's a chicken sandwich, people; get over it."

But devouring a Cajun-spiced one three weeks ago -- the crackling fried batter perfectly concealing a tender breast on a grilled, buttered brioche bun with pickles -- it became clear this chicken sandwich was worth getting arrested over.

So when news broke Thursday afternoon Popeye's would try and win back frustrated customers waiting for their back-logged sandwiches IF they brought in their own bun -- this new show I'm doing with Bruce Johnson and Ariane Datil called The Q and A hit the streets and answered the most important question of all:

Would they honor their own BYOB (Bring Your Own Bun) proclamation and make you a chicken sandwich if you brought the goods?

First, armed with Bruce's expense account, I went shopping and bought not just the buns but all the ingredients they would need to make the real thing: pickles and an actual chicken breast. (Overboard, I admit.)

Next, I headed over to our local Popeyes and put their customer service to the ultimate test: Would they not only take my brioche bun an pickles, but would they roll my chicken breast in that heavenly batter, fry it and make me a genuine chicken sandwich -- not some sorry imitation with nuggets under a heat lamp?

RELATED: Has the chicken sandwich debate gone too far?

I unearthed my package of brioche buns and asked them if it was true. The cashiers were pleasant, but replied, "We don't have butter." I told them I didn't need my brioche bun grilled. "But we don't have pickles," the young man said. I busted out my jar of pickle chips.

When I finally broke out my pound-plus, wrapped chicken breast, they began to chuckle. I told them I had one of their sandwiches and begged for them to roll my poultry in their batter from Cajun heaven, they brought the manager over.

[Digital story interlude: This is the moment when I am either thrown out or they try and appease me with a 3-piece meal deal, with red beans and rice and coleslaw, right? And you turn the channel and watch some other bald, recovering sportswriter trying to make it in local TV lamely attempt to do his make-me-a-sandwich bit with the bun on the counter, no? I mean, that's what I thought was going to happen.]

Step two: give said ingredients over and cross your fingers they will take it.
Kyley Schultz

Beyond my wildest, bad-for-you-food fantasies -- and obliterating every restaurant health code from the District of Columbia to Djibouti -- the Popeyes shift manager did it!

Several minutes after it all began, with customers sucking on sweet tea waiting for their own meal deals, he asked for my bun and jar of pickles and took it to the back. He emerged with a wrapped monster of a chicken sandwich. I couldn't believe it. I don't think the staff believed it.

What's more, he didn't charge me for the whole process. I only paid for two medium-sized drinks for me and the camerawoman, Kyley Schultz.

I don't know if he thought I was from Undercover Boss and was going to send him and his family on an all-expense-paid trip to the French Quarter, Chick-Fil-A human resources, the Stephen Colbert Show or what. I just know I might be the only person in America tonight enjoying a genuine Popeyes chicken sandwich because a fast-food employee went above and beyond in meeting the public's needs. When you take away any concern over strains of Salmonella or E. coli in the community fryer, I think that's pretty awesome.