KC's passionate fandom will be on display Sunday -- to the dismay of many offended Native Americans. 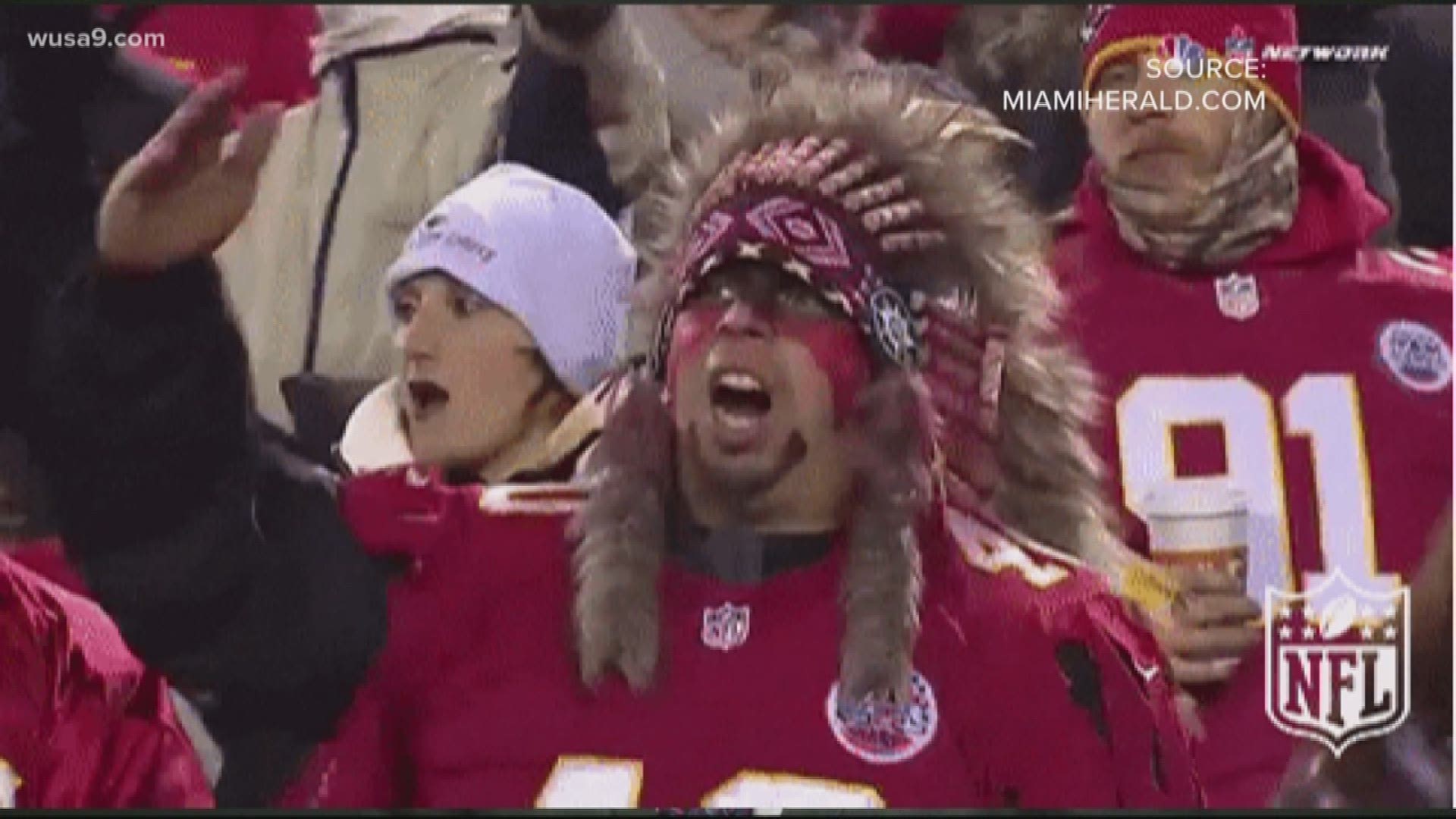 WASHINGTON — The white arrowhead came in 1972, replacing some of the team's Native American caricatures. Then came the drum. And the faux war chant. And the headdresses. And the red face. And, finally, the Tomahawk Chop.

Little by little, the Kansas City Chiefs created a world of Native regalia worn by mostly white fans, who chanted and chopped and played dress-up Indian. And this was done without a thought 30 and 40 years ago, when we didn't know better as a society.

Now, it's somehow been grandfathered in.

The Chiefs take the field for their first Super Bowl in 50 years Sunday against the San Francisco 49ers, meaning the 'Chop is about to drop before 100 million viewers, the first time their sports celebration/corny cultural appropriation makes its big-game debut.

1 / 4
AP
A fan is seen outside Arrowhead Stadium before the NFL AFC Championship football game between the Kansas City Chiefs and the Tennessee Titans Sunday, Jan. 19, 2020, in Kansas City, MO. (AP Photo/Jeff Roberson)

And if the franchise gets enough Native Americans per year to be a part of game day, it buys cover from the tens of thousands who want them to stop using the identity of a living race of people that bears no resemblance to who they are today.

"First off, I think it's quite arrogant and quite ignorant because we never did the Tomahawk Chop," Simon Moya-Smith said, a member of the Oglala Lakota Nation and the author of the upcoming book, My Spirit Animal is a Jackass.

"Just like we never had spirit animals, these are anomalies and constructs of white American culture," he continued. "I think people are so caught up in Americana and American kitsch. What they need to be doing is asking the question, 'is this stupid? Is this racist?' And, yeah, it is stupid and it is racist."

Sunday, however, the Chiefs and their passionate fan base will be on display and when the 'Chop and the chant begin, well, Rhonda Levaldo will have that same sinking feeling in her stomach.

"Anything that makes us look like that is a misguided perception of what Native people do. It makes us look like terrible killing human beings," Levaldo said. "I would be preferred to be honored in a different way than people dressing up in headdresses, face paint and doing the 'Chop. It's just insulting."

Levaldo is an Acoma Pueblo woman, a media communications professor at Haskell Indian Nations University in Lawrence, Kansas, a mere 45 minutes from Arrowhead Stadium and the heart of Chiefs country.

For Chiefs fans, the Super Bowl is ecstasy, the culmination of a five-decade wait for Kansas City to return to the penultimate game.

But for Moya-Smith, Levaldo  and tens of thousands other Native Americans, the scene of mostly Caucasian fans playing Indian is agony, another slight of their people and their pride:

"I think it's ridiculous to say that painting your face red, putting on war paint, or wearing a fake headdress is honoring us. Put it this way. Let's say it's Halloween. And you're invited to a Halloween party.

And everybody in that house is Native American. Would you shop up wearing a headdress? And if the answer is no, then why would you do it at any other time? Because you know it's inappropriate," Moya-Smith said.

As the mascot issue goes, Kansas City has not been the lightning rod of controversy that Washington's NFL team and Cleveland's baseball team have been.

A primary reason being that the name of D.C.'s team is a dictionary defined racial slur and Cleveland's Chief Wahoo logo is essentially a red Sambo -- so offensive that Major League Baseball commissioner Rob Manfred "helped" Cleveland to phase the logo out completely, which it did this past season.

Besides all the hype leading up to the big game by Chiefs fans, Levaldo has had to deal with the depressing Instagram photos of Kansas City owner Clark Hunt and his son at a summer Christian camp, wearing headdresses after the younger Hunt was named, "Chief Cherokee."

"Is it bothersome, yes, but I try to educate rather than get in arguments about it," she said. "I'm willing to talk to anybody about it if they will listen. What people don't realize is this hurts our kids. They see people doing the 'Chop and other things and they don't understand it."

Indeed, a group of unbiased mental health professionals got together for research nearly 15 years ago, producing the most significant social science on the topic.

"In 2005, the American Psychological Association came out and said there needs to be an immediate ban and to abolish all Native American mascots," Moya-Smith said.

Meantime, Kansas City fans will mindlessly participate in their Sunday ritual -- even if it was never part of their heritage to begin with.

RELATED: Michelob ULTRA has Fallon workin' on his fitness with John Cena for Super Bowl 54