Somewhere in a TV studio in DC, the future of local news is at stake

I'm part of a new viewer-driven show called "The Q&A" that will either blow up like "Survivor" or Oprah -- or just blow up. Either way, it's on, people. It's so on. 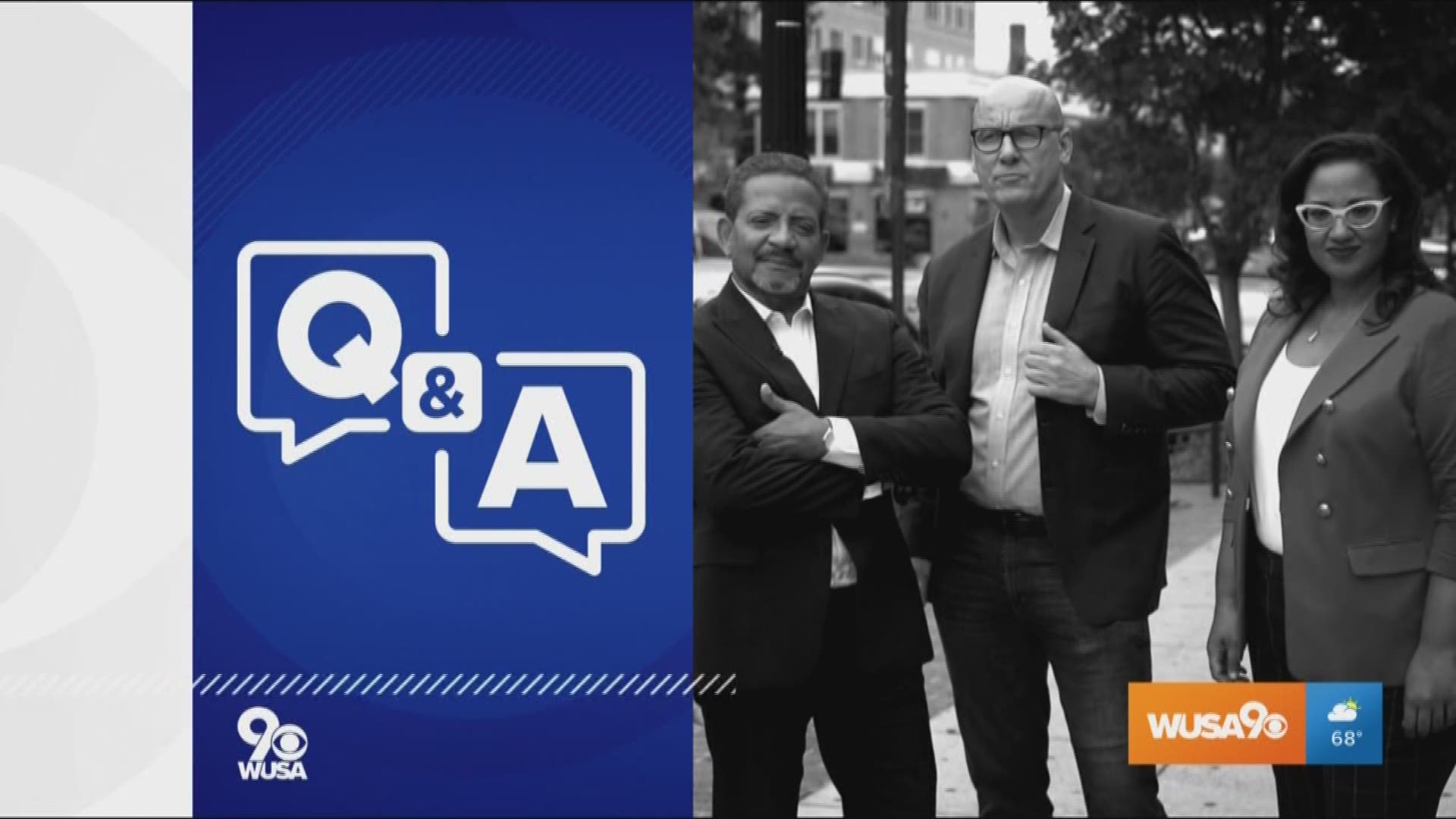 WASHINGTON — [Note to Reader: Mike Wise's views, snark and cutting sarcasm don't express the views of Tegna, this station, his family nor humanity. The heartfelt and insightful stuff, though, we will claim.]

I started typing this on the set of television's greatest show since, like, Sanford and Son or The Unicorn. (CBS Entertainment Prez Kelly Kahl paid me to write that). It's called The Q&A or, for you millennials, #TheQandA. Corporate is pitching it as flipping the script on old-school TV journalism -- this time, you ask the questions, we answer them.

If you have a real question, you can email us at TheQandA@wusa9.com or hit us up at #QandA on Twitter at the WUSA9 account or one of our own.

RELATED: Have a question? Our new show is 100% based on getting you answers! Here's how it works

[Column interlude: Hitting us up works, by the way. Some lady yesterday asked over Twitter whether it's true that dogs are allowed in Tyson's Corner mall but only if their feet don't touch the ground. Cass, the hip, young show researcher instantly got the answer by calling the mall. Who knew the lady was right? Pooches allowed, but no paws on the floors. My gut is somebody who sells doggie strollers in the mall lobbied for this law. Either way, we got the answer. Boom-shaka-laka!]

You know how the promos keep saying, "This Show is About You and Your Questions"? Yeah, well, you'll get your bios later when we get to know you.

Without further adieu, and because you need to know who you are going on this journey with and why ... your featured host and main contributors:

BRUCE JOHNSON -- Hands down, the coolest old head cat daddy in D.C. Yes, his back is creaking and he's old enough that his ears still hurt from the Big Bang. He's basically from the TV Newsroom That Time Forgot. Every time I hear Bruce yammering to someone on the phone, I half expect Ed Asner or someone else from the Mary Tyler Moore Show to be on the other end of the call. (Okay, if they didn't have an all-white cast).

Anyhow, a real gum-shoe reporter/storyteller, Bruce not only survived cancer; the man survived the same local TV station for 43 years! Oprah didn't even do that.

Bruce's great talent -- beyond telling stories laced with grit and perseverance -- is remaining as contemporary as he is old.

He's also one of the most revered TV news anchors in town.

Since the 2017 death of Jim Vance, the legendary anchor at another TV station four decades, Bruce is the most well-known African American anchor in the District. Yet it's not just old, black D.C. that knows Bruce; everybody of every color and creed around here knows, respects and seems to like Bruce. He's probably forgotten more stories about D.C. drug kingpin Rayful Edmond than the FBI remembers. Bruce can sometimes be fussy and crotchety in the news meetings, especially if you go on like you know D.C. better than him. But mostly he makes everyone laugh because he's always busting on someone and has a good heart.

However long this lasts, it's kind of cool to say I worked with a guy who was in the same newsroom with iconic sportscasters Glenn Brenner and Warner Wolf and who first clocked in during the Carter Administration.

ARIANE DATIL (pronounced ODD-EE-AHN DAY-TILL) Ariane is a polished, uber-positive pro who spends more time at her computer than Edward Snowden. If Bruce is the legend, she is the prodigy. Ariane is from Philly (everybody has character flaws) but her soul resides in her parents' native Puerto Rico. She is also an eternal optimist. Like if Ariane's hair were on fire and you told her, "Ariane, your hair is on fire!" Ariane would be like, "I know! Crazy, right? You like the color?"

Ariane collects expensive glasses. She collects designer frames like Imelda Marcos collected hot-red pumps and the Kardashians collect NBA players. I have no idea if these are prescription lenses or just fashion accessories, but I feel like they're extravagant enough that she could put them all on e-Bay, cash out and quit within a week. If Bruce is your grandmother's anchor, Ariane is your granddaughter's Facebook friend and Twitter follower and Instagram sharer. I swear, while the show was live Wednesday night, she was simultaneously doing a Facebook Live. The woman is a human hashtag. She doesn't socially engage, she socially engulfs. And, yes, everyone caught up in her vortex of platforms always ends up with a better Q rating than when they entered.

I don't want to say Ariane is insanely ambitious. But if Norah O'Donnell came down with a cold, Ariane would beat the Amtrak Acela by sprinting to New York, knocking Gayle King over and claiming the coveted CBS Evening News' anchor chair for herself.

The truth: her energy, work ethic and smile are all infectious. Taurine, caffeine and sugar have nothing on her. If Red Bull had some Ariane in it, no one would ever buy another energy drink again.

I want to give you some actual dirt on them, but we've only been rehearsing for a few months. Give me time. It'll come.

MIKE WISE: (Pronounced MIKE WISE) Some career move, huh? I haven't sugar-coated anything else so here goes nothing: I am a dyed-in-the-wool sports journalist/talking head trying to re-invent myself in local TV -- at age 55.

Told by many that local TV news was dead unless it was reinvented, I came to WUSA9 ready to do the embalming and cremation. What I found, shockingly, was a place committed to diversity and inclusion -- a place that would give a person of non-color like myself a real chance.

RELATED: COMMENTARY: 'My name is Ariane and I am more than my hair'

I mean, who else would go about hiring a middle-aged, bald, white man with no full-time, on-camera experience? That's thinking out of the colonialist box, Tegna.

All cringing aside, I've been playing possum. The truth is, I've been a guest on just about every local and national sports and news show I can think of, talking social issues related to sports and often weighing in on this or that D.C. team during my 11 years as a Washington Post sports columnist between 2004-2015.

Heck, I've got my makeup and eyebrow liner, my pocket square and earpiece. What I don't have is the discipline to cut down my verbose scripts and make them sound like a TV story instead of a run-on sentence. It turns out people who cut their teeth at the New York Times and WaPo need editors before the lights come up so they sound coherent. They also need people to remind them to turn their microphones attached to their lapels on and to put their earpieces in.

There are days when I still feel lost, like Albert Brooks in Broadcast News. How, when breaking world news happened, they put him in the big chair and he sweats like a sow and realizes he's not cut out to be William Hurt or Dan Rather or Gayle King.

But mostly, I like the authentic premise of The Q&A, the notion that a reader or viewer might want something explained more deeply than Google allows, the idea of trafficking less in breaking news and more in breaking perspective.

I'm not going to lie: aside from outing really bad people in society, I'm not in love with people-powered journalism. I think too many news organizations have grown accustomed to giving their consumers what they want (all Trump, all the time) instead of what they need (less advocacy journalism and more smart storytelling). Far too many have based hiring decisions on social media followers, "bot" followings some of their bang-up hires paid for without their new employer knowing or checking.

But you know what? The Q&A beats the snot out of right off the bat: the cult of the celebrity journalist. The disturbing trend of the storytellers, commentators and panelists becoming more important and prominent than the stories and opinions they are paid to deliver.

When the personality on the screen trumps the content and the people affected most by the news, we all eventually lose.

So my wish for this show and the people involved with it is a simple one: Slay in the ratings and don't get me fired.

OK, but really: if we can try and give back viewers the feeling that not only do they genuinely matter, but also that the people they're watching really care about their lives and how to make them better and easier, we will have succeeded in not re-inventing local news but, on the contrary, returning it to a time when more than a Nielsen share mattered.

Thanks for reading and thanks in advance for watching.

This story is part of a new show called The Q&A. If you’ve got questions, we want to answer them. Each night at 7 p.m. and at wusa9.com/theqanda, we’ll tackle everything that you want to know. Just use #TheQandA on social media, email us at TheQandA@wusa9.com or make a comment/mention on any of our Facebook/Twitter/Instagram pages.