Wise: Kobe's farewell was heartfelt, humorous and emotionally-wrenching goodbye to a legend and his daughter

Michael Jordan wept openly, Shaquille O'Neal cursed on air and all of Los Angeles, and beyond, grieved publicly with millions watching. 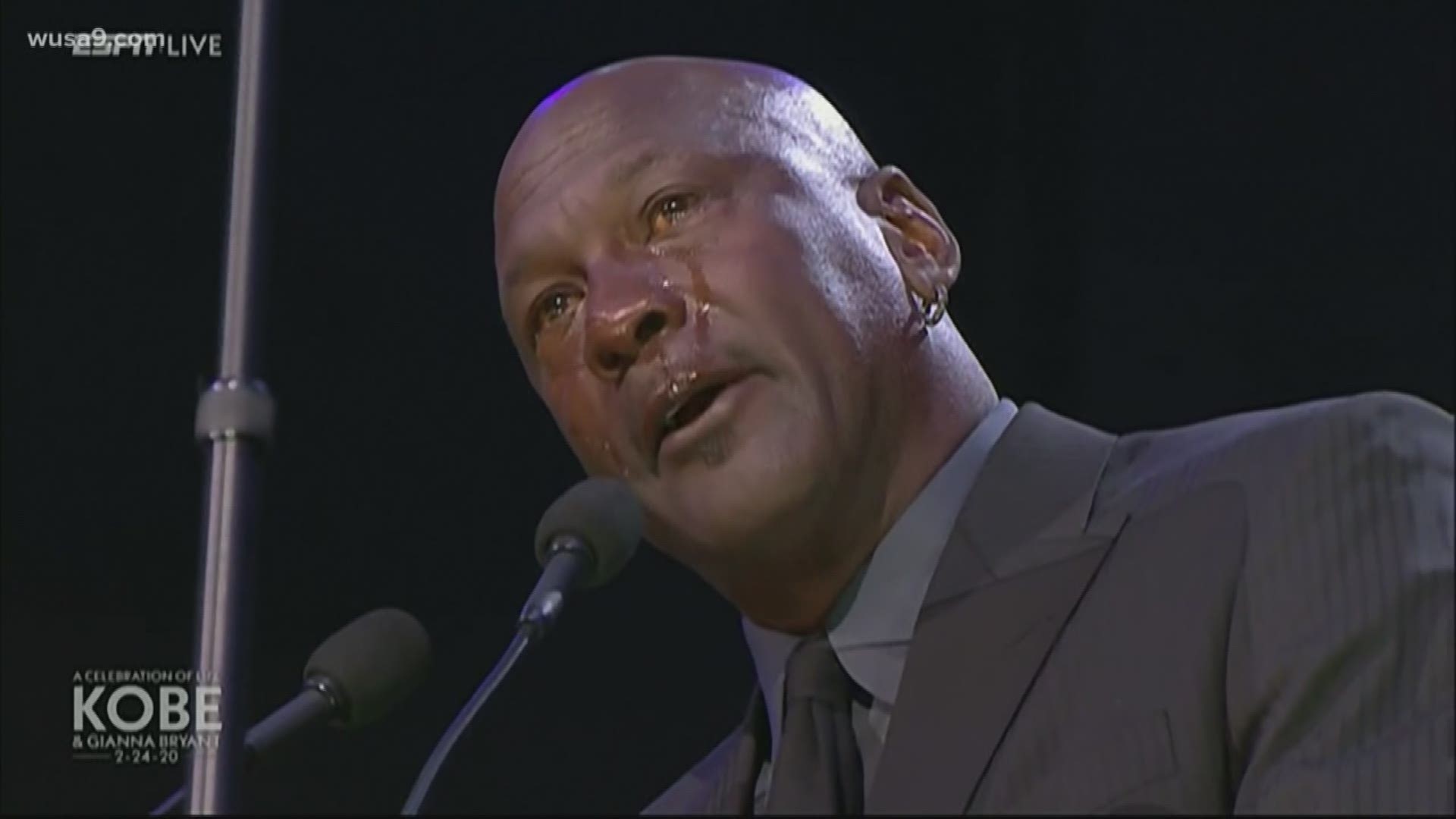 WASHINGTON, D.C., USA — As a sportswriter and columnist covering the NBA either full-time or peripherally since 1990, I'm one of many who wrote about Kobe Bryant's amazing feats at Staples Center, describing his poise in a seminal playoff game, his ability to deliver in the crucible, in the home arena of the Los Angeles Lakers, The House That Kobe Built.

And yet, before 20,000-plus, throatily chanting, "KO-BEE! KO-BEE!",  I've never seen such poise and emotion in that building. How a memorial service can top three hours and not feel long seems impossible. But it happened, in an arena that had everything there needed to be about Kobe -- hilarious anecdotes, heartfelt tributes and, most of all, raw, searing heartbreak.

What I take away from his memorial is what I and many others wanted to take away: As incomparable as he was as a basketball player, Kobe Bryant, the father and humanitarian, was so much more meaningful to the people in his circle and so many rings beyond it. He didn't live life as much as he seized it and then squeezed it for all it's worth.

The wife of Kobe's four daughters, including 13-year-old Gianna, whom Kobe perished with in the helicopter crash that killed all nine aboard, had the courage to eulogize her own daughter, and talk about all the things "Gigi would never see." It was so hard to hear, but showed so much of her strength to deliver.

"Kobe wanted us to renew our vows, he wanted Natalia to take over our company and for us to travel the world," Vanessa went on.

She made us laugh.

"He never left the toilet seat up."

She made us think about the father he was, the father she thought he'd be for years to come.

"He loved being Gianna's basketball coach. He watched Natalia play in a volleyball tournament on January 19th. And he wanted Bianca and Capri to play basketball so they could spend as much time with him as Gigi did."

And she made us cry. Oh, did she make us cry.

"God knew they couldn't be on this earth without each other," Vanessa said, sobbing. "He had to bring them home to heaven together. Babe, you take care of our Gigi....I'll love and miss you forever. Love, Mommy."

MJ has never shown more emotion publicly, not even at his Hall of Fame induction, which was more a Who's Who of People Jordan Hurdled to Dominate the NBA. I've covered dozens of Jordan press conferences and spent time alone interviewing him. Nothing ever came across as authentic and real as this Michael Jordan, who opened a vein and let it all out.

He talked about all the late-night texts he received from Kobe, the ridiculous questions that eventually endeared him even more to Jordan. He began crying again.

"Now he's got me ... I'll have to look at another crying meme for the next ...," he said, as Staples Center erupted in laughter. "He always got to you personally, even when he was a pain in the ass."

Finally, he said his goodbye.

"When Kobe died, a piece of me died. A piece of you died -- or you wouldn't be here. I promise that I had a little brother that I tried to help every way I could. Please rest in peace, little brother."

Magic Johnson has done yeoman's work in becoming almost a grief ambassador during former commissioner David Stern and Kobe's deaths. But this morning in Los Angeles, Jordan expressed a grief felt by millions. That it happened to be coming from the greatest player of all time meant even more.

-- "I'm sure I'm not the only player who got texts from Kobe asking what drills I was doing at 13," Diana Taurasi, Kobe's good friend whom he affectionately nicknamed "The White Mamba" said. Speaking of Gigi, she added, "I mean, who has a step-back jumper at 11? LeBron is still working on it."

-- Geno Auriemma, the legendary UCONN women's basketball coach: "The third or fourth time Gianna passed the ball when she was open, I thought, 'She's not listening to her father.'"

-- And, of course, Shaquille O'Neal on the night his Lakers' teammates asked him to be an intermediary:

The arena busted up again.

"I went back and told the guys, Kobe's not passing tonight," Shaq said.

Held on Feb. 24 -- 2/24 -- to mark the numbers he and his daughter wore, it was called a "Celebration of Life," and it was. But amid this public catharsis was still the heartbreaking realization that three kids -- teammates, all 13 years old -- died with one or both their parents and their coach in a helicopter crash. It's so damn tragic.

Alicia Keys' powerful and penetrating Moonlight Sonata by Beethoven made people instantly well up. What most in the audience didn't know was that was the classical piano piece Kobe taught himself to play by ear while trying to win back Vanessa after an affair in which he was accused of sexual assault and nearly went to trial.

The ending to the service opened the ducts for good. "Dear Basketball"  -- the documentary short that won an Oscar last year and Kobe's love letter to the game-- was played in full, all 5 minutes and 22 seconds. The images of a young Kobe interspersed with the Mamba dunking, shooting, levitating above the rim, the black-and-white illustrations, the classical music -- it was perhaps the greatest ending to a memorial service of any kind.

I'm writing the full text of that short film here, because it needs to be read to attempt to understand how Kobe felt about the game:

In the Great Western Forum

I knew one thing was real:

I fell in love with you.

A love so deep I gave you my all —

From my mind & body

To my spirit & soul.

As a six-year-old boy

Deeply in love with you

I never saw the end of the tunnel.

I only saw myself

Running out of one.

I ran up and down every court

After every loose ball for you.

You asked for my hustle

I gave you my heart

Because it came with so much more.

I played through the sweat and hurt

Not because challenge called me

But because YOU called me.

I did everything for YOU

Because that’s what you do

When someone makes you feel as

Alive as you’ve made me feel.

You gave a six-year-old boy his Laker dream

And I’ll always love you for it.

But I can’t love you obsessively for much longer.

This season is all I have left to give.

My heart can take the pounding

My mind can handle the grind

But my body knows it’s time to say goodbye.

I’m ready to let you go.

I want you to know now

So we both can savor every moment we have left together.

The good and the bad.

We have given each other

All that we have.

And we both know, no matter what I do next

I’ll always be that kid

With the rolled-up socks

Garbage can in the corner

:05 seconds on the clock

Ball in my hands.

In a very real and heart-aching way, when that short video ended it almost felt like it was expressly made for a memorial service. But his? No. Not now. Not at 41 years old.

There were so many reminders of what might have been, who Kobe had become post-retirement when he wasn't obsessing about basketball every day. Rob Pelinka, his best friend and longtime agent, revealed that he got a text from Kobe on the morning of the crash, Jan. 26, inquiring about names of any baseball agents. Pelinka responded and Kobe explained he wanted to help a friend get an internship. Kobe sent that text on the helicopter.

Beyonce Knowles opened the proceedings with a stirring tribute and Christina Aguilera's rendition of "Ave Maria" helped put closure on the service. It went more than three hours, but it didn't feel long or too morose or glitzy or anything that didn't seem just right for those who will be healing for a long, long time from the loss.

As the tributes kept pouring in over the last month -- swelling to proportions that rivaled Princess Diana's shocking death -- I began to wonder if the suddenness of such a tragic death, and the fact that children were involved, made us all even more torn up inside. I began to wonder if the lionization of Kobe Bryant at some point would feel overblown, too maudlin, really, befitting a man, who played basketball for a living and whose past wasn't without genuine controversy.

But as the personal stories of kindness kept coming in -- the terminally ill children he visited in their last weeks, the moments that Kobe kept hidden from the media and held sacred between him and those children and their families -- I've come to realize that his inspiration is personal, that I am no one to judge why someone meant so much to somebody else and why they hold that person in such regard for what he did for them at some point in their lives.

Kobe's entire presence could be analogized to that large rock thrown into the lake by a child. Long after the splash, long after it fell to the bottom of that lake, the ripples kept forming. And forming. Until the child was now a man and he could understand all the change he made in that body of water, how no other rock thrown by anyone else could make that many ripples over time.

The 20,000 people inside Staples Center and the millions watching on television will tell you, that in just 41 years, Kobe Bean Bryant made so many more ripples that they are still forming.