Marshall shows one of the early cases he took on before he was sworn into the Supreme Court. Another Howard University graduate, Chadwick Boseman, portrays Marshall. 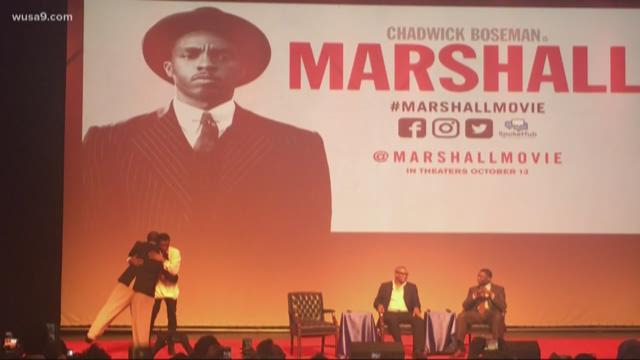 Howard University celebrated the anniversary of him joining the SCOTUS bench by showcasing an early screening of the movie Marshall to its students, faculty, and staff. Marshall shows one of the early cases he took on before he was sworn into the Supreme Court. Another Howard University graduate, Chadwick Boseman, portrays Marshall.

There was no shortage of reactions from the audience throughout the movie. There were roars of laughter at witty punchlines, boos at any act of unfairness, and gasps as the plot of the movie thickened. At the end of the movie, the audience was on its feet giving a standing ovation.

"The movie was so good," said Howard University junior, Siobhan Stewart. "It was really nice to learn about Thurgood Marshall in a way that we didn't know about him. And I think it's at a good time in history to watch this with everything that's going on."

"I think the most important thing about this film is just knowing that us as an African American community have to stay together and protect each other," she said.

Some students were amazed at the fact that Boseman had walked the campus of Howard University and is now portraying another Howard alumnus.

"It's so inspiring to see someone who was walking this campus before, and you come back and the whole campus is screaming for you," said freshman, Ameerah de Chabert.

A discussion panel followed the screening moderated by Roland Martin. Students lined up in the aisles to ask questions to Boseman, director Reginald Hudlin, and NAACP President Derrick Johnson.