A company in Maryland is innovating the traditional eye test we're all used to taking. With a small device and a few minutes, health care providers can change the way they treat patients. 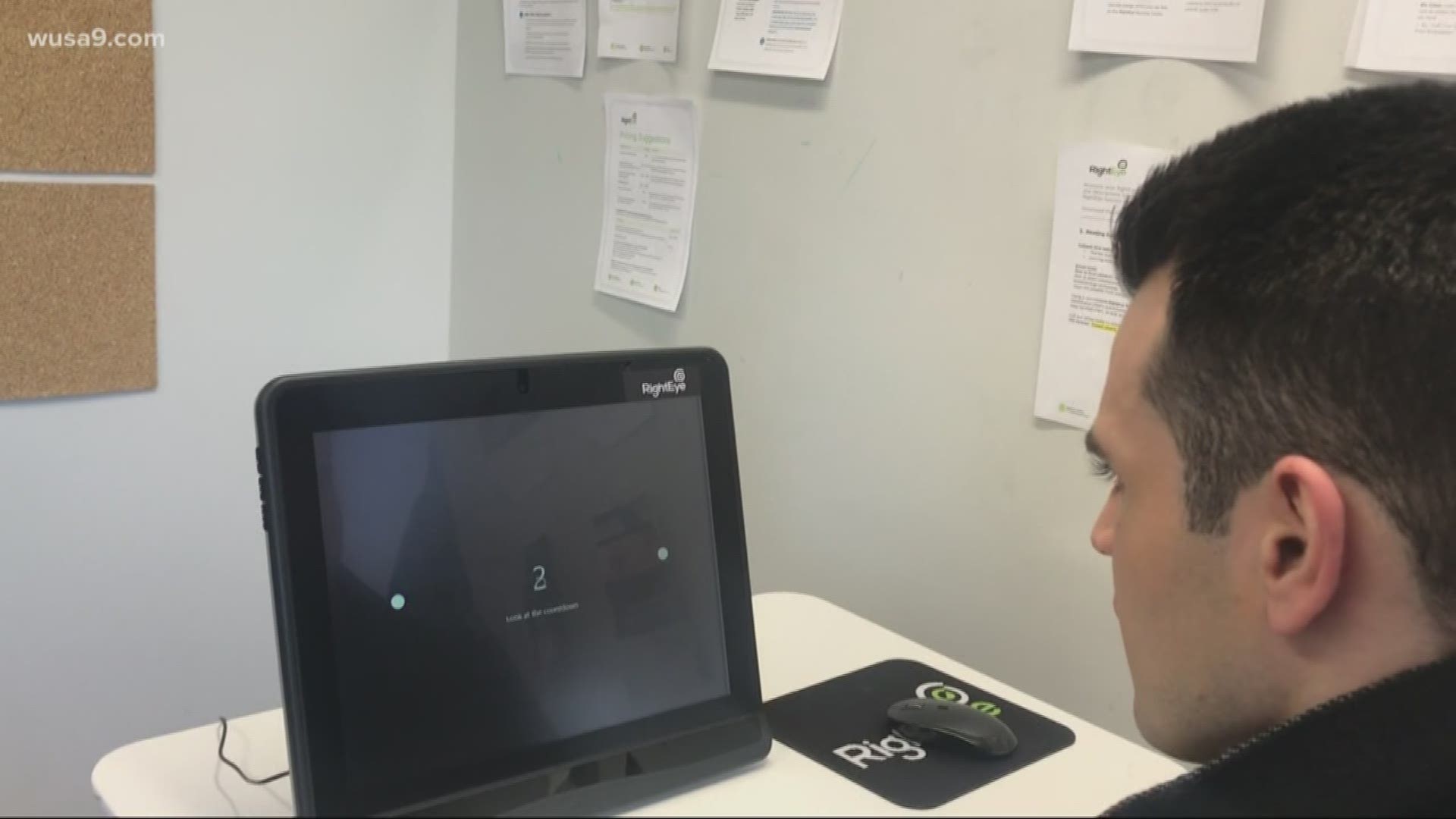 BETHESDA, Md. — A routine eye exam is, by definition, predictable. The doctor cycles through the lenses while the patient replies by saying whether things look better, worse, or no different. A company in Maryland – RightEye – is trying to break up that monotony and innovate.

They’re not replacing the traditional eye test, but rather, adding another layer to it. The product gives health care providers the chance to change the way they help their patients.

It’s a vision test from RightEye that comes courtesy of a small, easily-transportable device. WUSA9 Gio Insignares took the test and it took around five minutes, after a series of tests that force eye movement in a variety of manners. Circular tracking, vertical tracking, horizontal tracking, and vertical speed and targeting are just some of the challenges to get through.

However, this is more than just seeing how fast you can follow a target. Coordination goes back to brain function. So the RightEye technology isn’t getting rid of things like that classic eye chart you see at the doctor’s office, but rather identifying the functionality of your vision and seeing how it connects back to the brain.

At the end, the results can be directly emailed or printed off on a sheet of paper. The score you’re instantly drawn to is the “Brain Health Indicator,” which ranges from “dysfunctional” all the way to “exceptional.” It also diagnoses your right and left eye, highlighting any deficiencies or other symptoms to watch out for.

Righteye is the brainchild of Co-founders Adam Gross and Dr. Melissa Hunfalvay. The former is the CEO and the latter the Chief Science Officer, as well. Gross makes it clear that while business is important, there’s something more significant with this product.

“As an entrepreneur, you always want to build successful companies… but as you get a little bit older, maybe you want to have an impact on society,” he said.

“Our passion equal to building a successful company is to have an impact on as many people as possible around the world… and we think we’ve just cracked the surface.”

As for the results of the test – that’s where a doctor comes in.

Dr. Smithson also works with athletes of all ages, not just the pros, and looks at the results of tests like RightEye to determine the best path for success. That path is easier to figure out because of the detail in current testing.

“It’s not your grandmother’s eye exam anymore,” Dr. Smithson said. “We’re not sitting on a stationary chair, looking at a stationary target… we’re looking at things like their visual reaction speed, the contrast, or the ability to see in different lighting conditions.”

“We’re looking at their muscular skills and capability… We’re even quantifying neurological speeds… so your ability to make decisions on a field, on a court, on an ice… those are things we can actually do today in today’s eye exam.”

Cullen Horowicz is a third basemen from Jefferson High School in West Virginia with goals are making it big in baseball. For him, the RightEye test was a way of identifying areas of improvement in his game and working to enhance them through a series of cognitive drills. Some of those drills included catching a ring while wearing special glasses that affect your eyesight in real-time.

The lessons learned go beyond results on the field. It’s a process of perseverance that pays dividends on and off the field.

“As a person, just seeing that there’s multiple things you need to be successful in everything,” Horowicz said. “Not just the physical side or the mental side… you need both.”

The potential for a system like RightEye also extends past athletes. Because the test analyzes your cognitive ability as it connects to vision, “healthcare providers can differentiate themselves by expanding the services they provide, be it for functional vision, reading, brain health or sports performance,” as the company’s website puts it.

Ultimately, whatever results a patient gets are not carved in stone.

“These are all fixable, trainable, treatable things... and what we use the RightEye system for is a before and after” Dr. Smithson said.