VERIFY: You're not crazy, Metro train doors take a long time to open 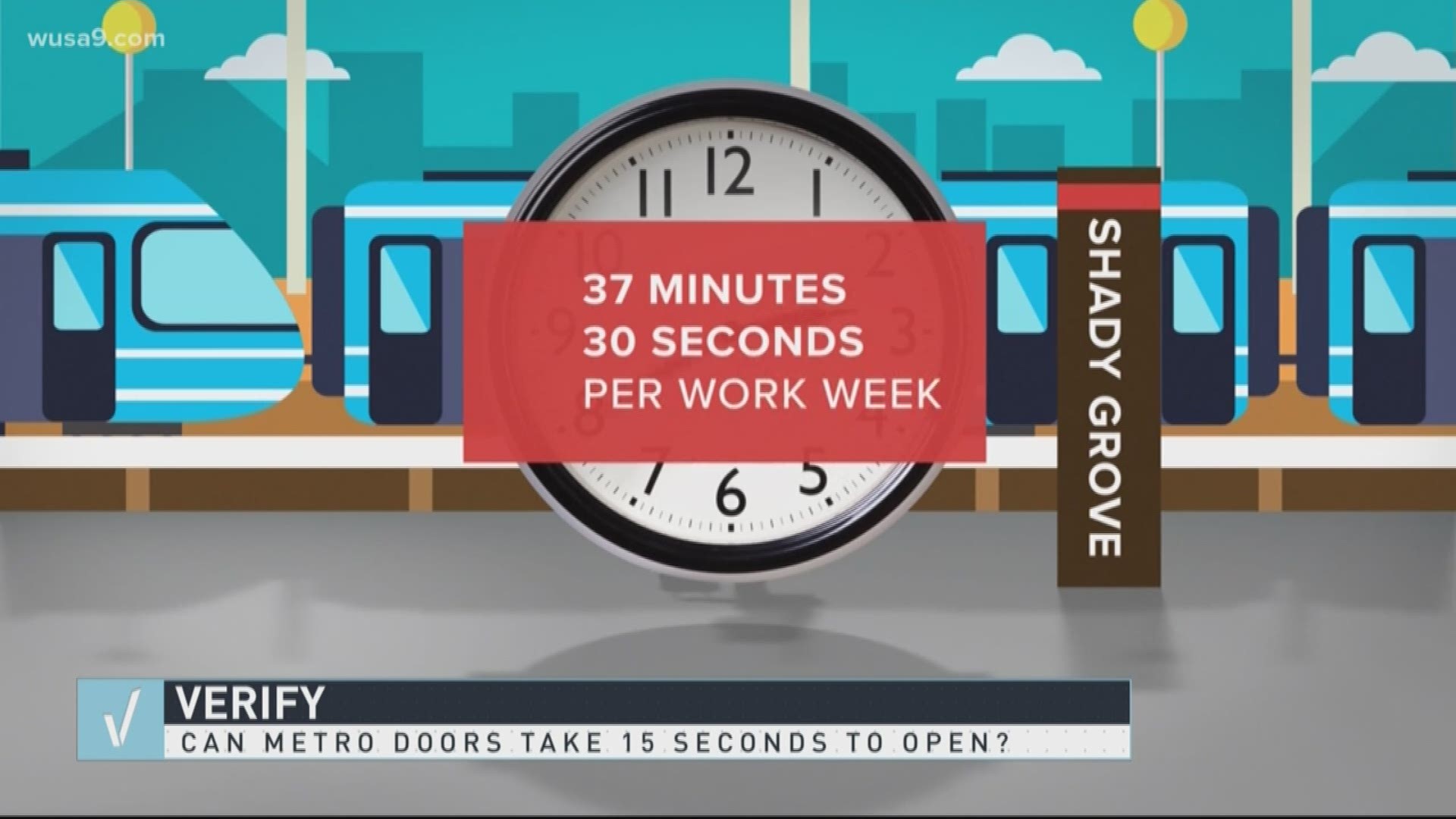 Tick tock, the platforms right outside, the train is stopped, but the doors are locked.

If you've noticed Metro train doors take a long time to open, you're not the only one.

During rush our every minute counts. Mariela Martinez, a DC-native and Metro rider of 13 years, knows this.

"Sometimes seconds can make a difference," Martinez said. "So if you're waiting for 15 seconds for the doors to open, and the next train is going to leave in 15 seconds, that's a connection you missed."

Credit: WUSA
Riding 15 stops on the Red Line, from one-side-to-the-other, with 15 second delays each stop, adds 7 minutes and 30 seconds to your commute.

Let's say you commuted 15 stops every day from Shady Grove to Gallery Place. Fifteen extra seconds at each stop means an extra three minutes and 45 seconds for your commute in. Round trip that's 6 minutes and 30 seconds a day; 37 and a half minutes in a 5-day work week; and two hours and 30 minutes a month, wasted waiting for the doors to open.

Martinez posted her less than perfect commute on Twitter with plea to WMATA: "Can we fix this?"

Verify Researcher Eliana Block met up with Martinez to find out what was going on.

We rode five stops on the green line to National Archives on the the 7000-series rail cars, then backtracked to Gallery Place on an older model rail car to Tenleytown, logging 13 stops total.

Credit: WUSA
Doors took as few as 3 seconds to open on the older rail cars, Martinez and Verify found.

Credit: WUSA
Doors took as long as 15 seconds to open on the newer, 7000-series rail cars, Martinez and Verify found.

Once we Verified the 7000-series doors were taking longer to open, we brought Martinez with us to Union Station go get some answers from a WMATA 13-year train operator.

"A couple years ago WMATA put in a policy where all the trains go to the end of the platform, the 8-car marker, and they also implemented a rule for the operator to look out the window 3-5 seconds," Drion Baker said.

Baker explained protocols have changed with the 7-000 series.

"Now, why it's a longer delay now, is because of the new 7-000 trains has a safety override in it," Baker said, "where you have to get up out of your seat, go over to the window, stick your head out 3-5 seconds, push the 'door open' button walk back to the console and push 'okay'.....and then go back to the window and open the doors."

So we can Verify, Metro doors take more time to open on the newer trains. It can take between 7-15 seconds for an operator to pull up to the marker, check the window twice and push two buttons, before passengers disembark.