VERIFY: Viral post about sex-traffickers on Snapchat is false

A viral post claims sex traffickers are locating girls on Snapchat. Before you go sharing the post or looking at your kids' account - check out what our VERIFY team found. 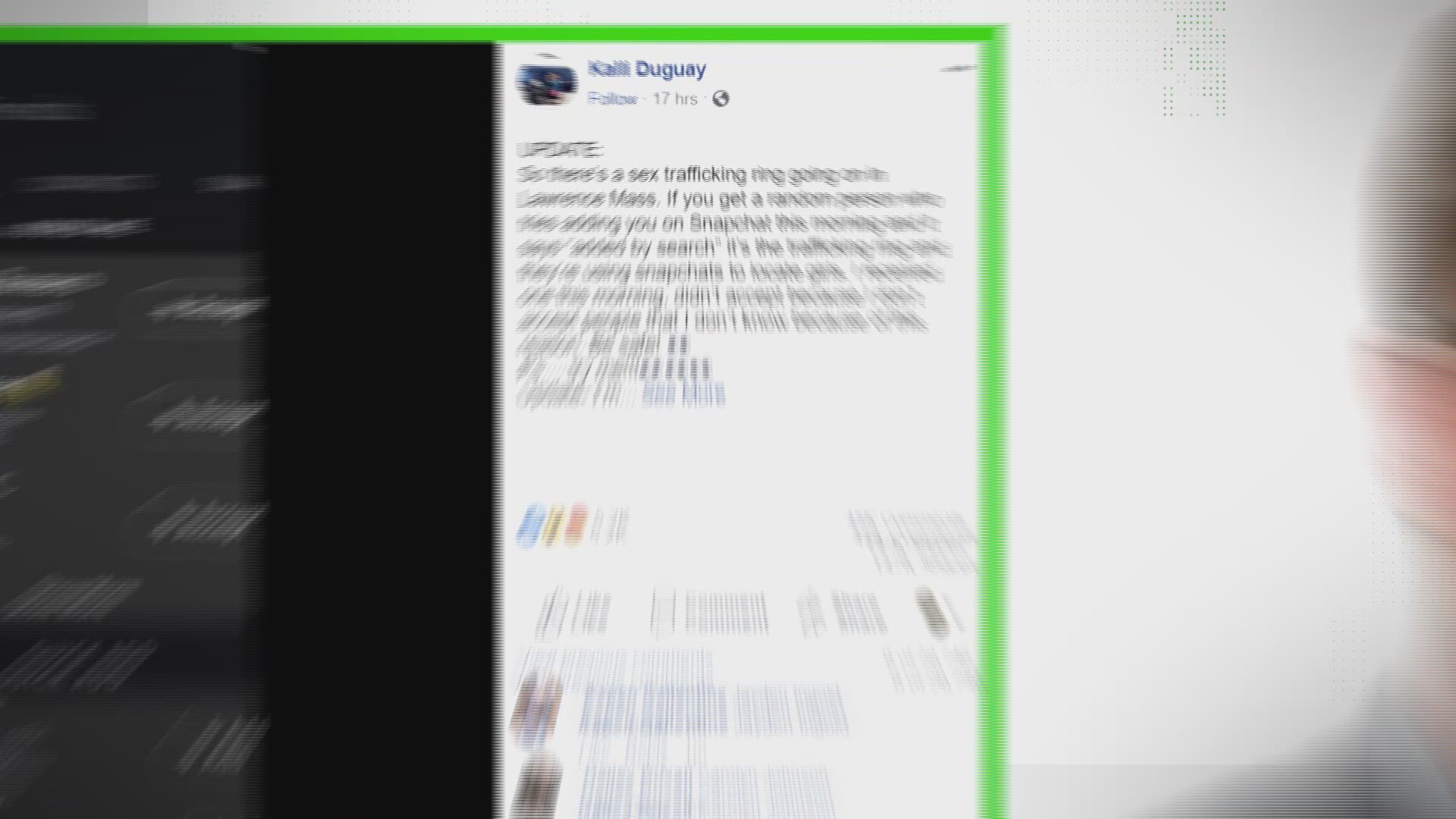 A Facebook post has gone viral with its claim that there's a sex trafficking ring locating girls on Snapchat.

“If you get a random person who tries adding you on Snapchat this morning and it says ‘added by search’ it’s the trafficking ring and they’re using snapchats to locate girls.”

That’s what a Facebook post with more than 150,000 shares and counting claims. The person who posted it said they're trying to warn people of a supposed sex trafficking ring in Lawrence, Massachusetts that was utilizing Snapchat’s Snap Map feature.

Kalli Duguay
UPDATE: So there's a sex trafficking ring going on in Lawrence Mass. If you get a random person who tries adding you on Snapchat this morning and it says "added by search" it's the trafficking ring...

Is there a sex trafficking ring in Lawrence, Massachusetts using Snapchat to find women?

No, police said there's no substance to this claim and Snapchat confirmed they haven't seen any evidence of this either.

First of all, the original post offered no evidence to support the claims within it. Because of that, there are no specific points to disprove.

However, the Lawrence Police Department posted on Facebook there was “no substance” to the viral claim. Snapchat told VERIFY, "We believe this to be a case of disinformation. There is no evidence supporting this allegation."

Lawrence Police Department
The LPD has been made aware of a social media scam referring to sex trafficking. There is no substance to this matter. As always the public should use caution when responding to, or clicking on...

The claim probably originated from a well-meaning fear. A news article outlining human trafficking and prostitution in Massachusetts -- including one anecdote in Lawrence -- was published by a Massachusetts news channel as recently as April 2.

However, there have been no news reports regarding sex trafficking in Lawrence anymore recently. And the first instance of this viral claim was this Facebook post -- not a news source or police department of any kind.

The ability to find your location on Snapchat is a real thing -- if you choose to enable it. In order to do that you would have to go into your Snapchat profile, go to Snap Map, and choose to turn it on for all friends.

However, that feature is turned off by default (Snapchat calls this “Ghost Mode”), according to the company. Even if you do choose to turn it on, you have the option to show your location to only friends specifically chosen by you. Snapchat explained that your Snap Map location is also only updated when you open the app.

But, there is no evidence to suggest you’re at risk of being picked up by a sex trafficking ring if you do.