VERIFY: Are there documented cases of adults giving trick-or-treaters pot-laced candy in the DMV?

When police post their yearly warnings about marijuana laced Halloween candy, some call it fear mongering, others call it due-diligence. But has this ever happened? 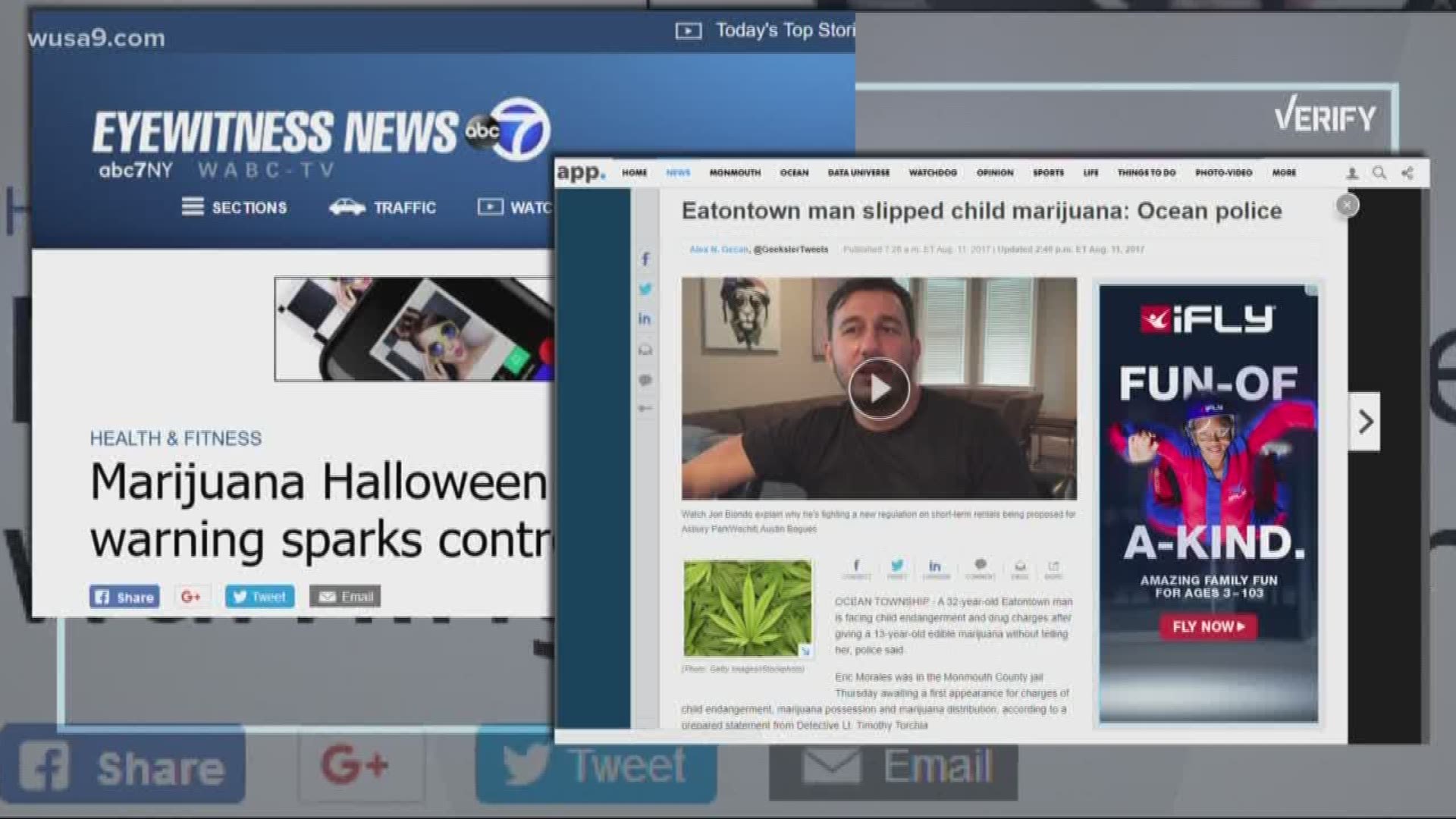 Are there documented cases of adults giving pot-laced trick-or-treat candy in D.C., Maryland or Virginia?

There aren't any. But police departments are requesting parents take precaution and check their children's candy trove.

Like clockwork, police put out a new social media advisory before Halloween emphasizing the need to check your child's candy.

Every year the public's reaction is a mixed bag. Authorities in Johnstown, Pennsylvania were the first to push out an alert this year.

The post exploded online, with some people offering words of thanks, others accused police of peddling anti-marijuana propaganda.

But it all comes down to the facts.

So the Verify team asked local law enforcement in the DMV: Are there documented cases of adults giving trick-or-treaters pot-laced sweets?

Local law enforcement in Arlington, Alexandria, D.C., Howard, and Montgomery County confirmed there’s no documented cases of this ever happening.

Back in 2014, over Halloween week, Prince George's County police said they found packages of pot-laced candy. However, investigators never said the candy was intended for kids.

"It's not believed any of the seized edibles were going to be given out to children for Halloween in 2014," Christina Cotterman, a spokesperson for Prince George's County Police, said. "Since the seizure was done close to Halloween, we used the day as a timely peg to alert the community."

"This is the first time we’ve seen this product in Prince George’s County," Captain Chuck Hamby, Narcotic Enforcement Division Assistant Commander said in 2014. "Despite the on-going investigation, we felt it important to let our community know that products like this exist so parents and guardians ensure the candy doesn’t somehow wind up in their children’s Halloween candy bag."

Back then, they traced the source of the sweets to Colorado.

Even though entities like the U.S. Drug Enforcement’s division in St. Louis continue posting public advisories, like this one from 2018 -- with photos of "Rasta Reese’s" and "Keef Kat" -- they clarified they had not "identified any specific threats."

"As a federal agency, the DEA tends to go after the 'worst of the worst' as our main mission – the sources of supply, the criminals and drug gangs who perpetrate violence in our communities, the higher-level drug traffickers and distributors who bring poisons into our neighborhoods and try to take hold of our community through addiction and related problems," Katherine Hayek, a spokesperson for the DEA Washington Field Division, said. "Whereas, the various local, state, and tribal police departments we work with, tend to be the ones who see the majority of the individual incidents and crimes involving drug use and dealing."

Our researchers searched online and found, some small sellers are using third-party sites to market some knock-off candy packaging. One seller, we found, was selling "Stoney Patch" packages.

One man was sued for $100,000 by candy titans, among them Hershey's, back in 2007 for violating copyright infringement laws and selling pot-spiked Reese's and Jolly Ranchers.

Still, there's no data or documented cases of children every getting these types of candies from adults on Halloween.

Under Maryland law, the only legal edibles available are gummies and taffies.

"They range in the level of THC milligrams, from 5mg up to 40mg, those can retail from $30 to $60,"Bradley Shelly, manager retail operations at Baltimore dispensary Heath for Life Baltimore, said. "There are 1000mg RSO, that could be infused into gummies or candies on your own at home. They typically retail for $60 to $80."

A gram (picture the size of a dime) of medical cannabis retails for $15 to $20, Shelly said.

"As a parent of three young children myself, I would agree that parents should always be mindful of what their children are consuming, and a little cautious when their children are accepting things from strangers," Shelly said. "Throw away unwrapped loose candies would be the best advice. But lets let the kids have fun and stop trying to push so much unfounded fear. Just be smart as parents and guardians of our little ones."

So we can verify, no, there are no confirmed cases of trick-or-treaters going home with pot-infused treat Still, police said you should inspect your child’s candy haul, and throw away anything unwrapped or opened.

RELATED: VERIFY: 40,000 sign petition imploring Trump to move Halloween to Saturday. Can he?

RELATED: VERIFY: How many calories are in your favorite fun size Halloween candies?