We can verify that Walmart does offer a less expensive insulin without a prescription. 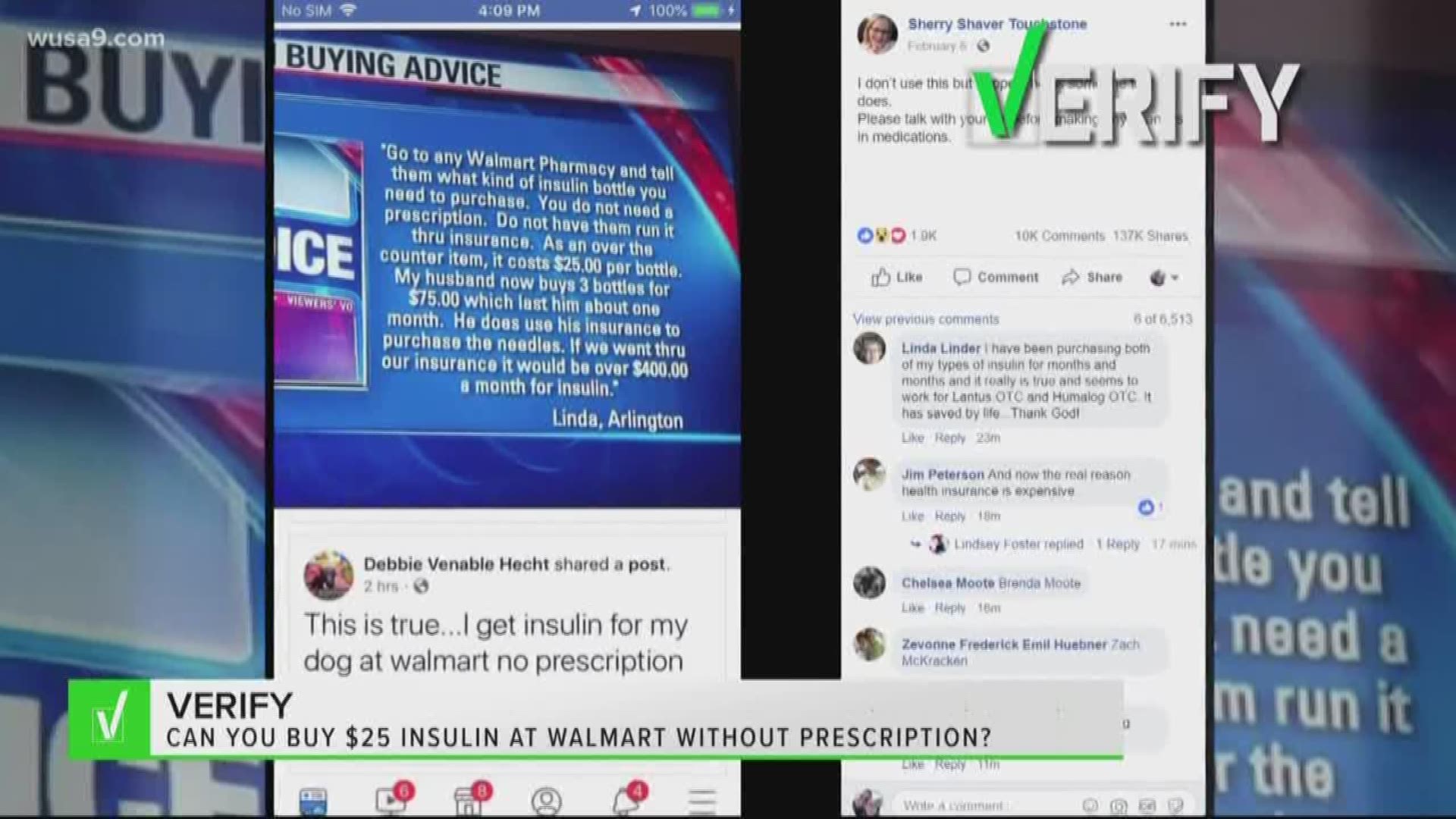 Yes, but it's technically 'behind-the-counter,' because even though you don't need to show a pharmacist a prescription, you still need to get it from a pharmacist. Currently the only insulin offered OTC is Human Insulin, NOT Analog.

Rising prescription drug prices are soaring, creating a national outcry and the very real decision to choose between food and life-saving medicine.

More than 30 million people in the U.S. are living with Diabetes, according to the American Diabetes Association.

One of you asked us whether insulin could be bought for a fraction of the price over the counter at one major retailer.

"Would you and you team please verify this post from Facebook?," a Viewer wrote to the Verify team. "If this is not true, I feel so bad for the people who might be duped."

Sherry Shaver Touchstone
I don't use this but I hope it helps someone that does. Please talk with your Dr before making any changes in medications.

With more than 135,000 shares, this Facebook post shows a a TV news graphic which quotes a viewer who claims you can purchase $25 insulin from Walmart without a prescription.

This appeared during the TV stations "Viewers' Voice" segment, and the anchor ends by saying, "try it, if it works I'd like to hear from you."

So is it true?

Our researchers reached out to a spokesperson from Walmart; they confirmed, yes, they offer less expensive insulin without a prescription.

The drug is technically considered, 'behind the counter,' since you can't pick it off a shelf, but have to get it through the pharmacy.

"It is the only insulin available over the counter, but it is kept behind the pharmacy counter," McIniss said. "There is a quantity limit of 4 vials or 4 boxes per transaction. We sell ReliOn insulin in all states, in all stores, that have a Pharmacy."

The rising cost of insulin is no joke. The American Diabetes Association found that an uninsured person with diabetes could pay up to $480 a pop for insulin.

But keep in mind what you'd be paying for, this behind-the-counter insulin is called Human Insulin, it's the older version, which takes slower to metabolize than the newer Analog version.

"All of our Relion Insulin is Human Insulin," McIniss said. "We currently do not offer Analog insulin OTC."

Different insulin differ in how soon they start working, when the insulin works its hardest, and how long it lasts.

The FDA says it's very important that people with diabetes never stop taking medication or switch medications without discussing it with a health professional.

Insulin can have different strengths and trigger different reactions with your body.

So yes, we can Verify, you can purchase 'over-the-counter' insulin at Walmart for a fraction of the price, but always consult your doctor first.