VERIFY: Yes, public school enrollment is dropping during COVID, and it could cost districts millions

Districts worry enrollment will bounce back, but they won't have funds to serve new students 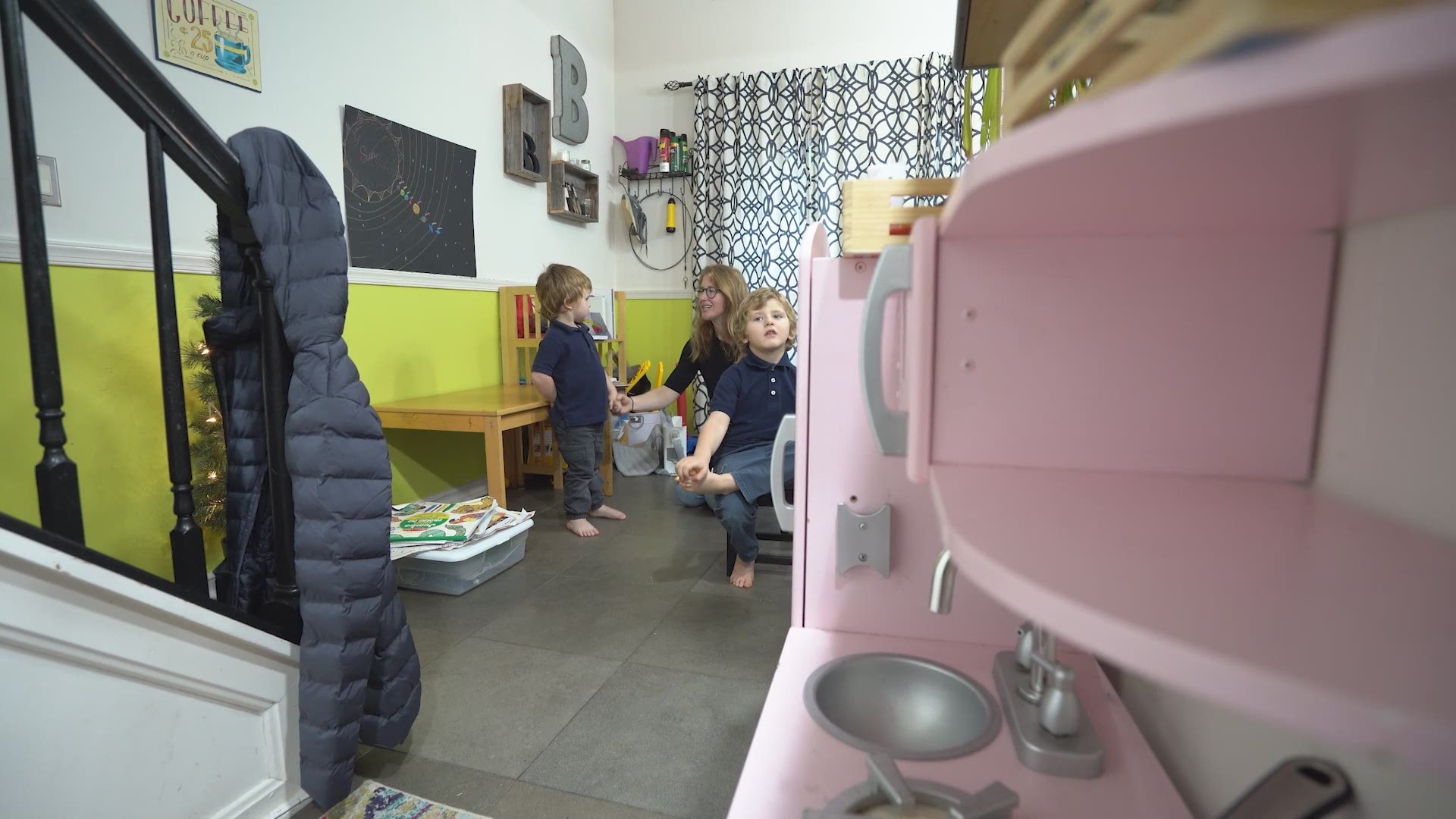 In October, Beyer unenrolled her 5-year-old son John from a public school in Fairfax County.

“Virtual wasn’t working,” she said. “He wasn’t developing at all.”

John is slightly delayed. He started speaking just before COVID hit. Beyer felt his online course material and virtual classroom was failing him.

“The meanness I had to use to keep him on that computer screen sometimes or force him to pick up a pen, it just wasn’t worth it,” Beyer said. “It was really sad because I want what’s best for him, and I realized at that point that I did need to step in and take over.”

Beyer is now homeschooling John, and she’s far from alone.

Are public schools seeing a decline in enrollment? And could they lose millions of dollars in funding as a result?

Yes, school districts and education experts confirm enrollment is declining in school districts across the country, and the drop could cost them millions in funding that will directly impact students and families in the districts.

Many school districts, including several in Maryland and Virginia, are reporting a decline in enrollment.

Data from Fairfax County Public Schools in Virginia shows enrollment this school year is down 5% overall and 8.2% for elementary schools.

Kristin Blagg is a Senior Research Associate at the Urban Institute. She focuses on education policy for K-12 schooling.

“Virtual learning is hard,” Blagg said, explaining the enrollment decline. “Parents may feel they’re not fully equipped to help their student if they’re virtually learning and may opt for an alternative option.”

Blagg says many families are choosing alternatives like homeschooling and private school. Some are even taking more extreme measures.

Ciara Daly, 16, moved from Montgomery County, Maryland to her grandmother’s home in Ireland, where students are back in classrooms.

“A whole semester of Zoom, four or five hours in front of your computer a day home alone, it’s just miserable, and I just didn’t want to do that,” Daly said.

“What we’re concerned about is funding,” Derek Turner said, adding that he expects the enrollment numbers to bounce back when schools return to in-person learning. “It would be millions upon millions of dollars for our school system and to serve our students. And if we see that increase in students next year, we won’t have the funding to meet the needs of those new students.”

Some districts are now asking states to use last year’s enrollment or to change their funding formula. But many states already face budget problems from COVID.

Rebecca Sibilia is the former CEO of EdBuild, a school finance advocacy organization that shut down this year.

“I think there is a very firm possibility that states will use the fact that enrollment is declining in public schools in order to take the cuts and the size of the cuts that they’re going to need to take because of their current revenue situation,” Sibilia said. “If that happens, our neediest public schools are likely to suffer the most.”

He says the district expects to lose $34.6 million because of an enrollment shortage of around 1,700 students. And with other state funds set to end, including the Kirwan Commission’s equitable education funding, the district is preparing for a $170.5 million budget gap next year.

“We would like to avoid the more drastic cuts to schools and to our staff,” Herbstman said.

He says they’re now looking at some hiring and overtime freezes, cutting down discretionary spending and dipping into savings.

“There is definitely reason to be concerned there will be fewer services available next year, but at this point I don’t think we’re ready to say exactly what that will look like,” he said.

The school district is still months away from passing a final budget, and they’re hoping the state will reassess funding and help them close their gap. But they also believe families in Prince George’s County will likely feel the effects of those potential cuts.

Yvette Reyes is a single mom and essential worker in Prince George’s County. Her daughter Lisette, 7, does most of her second grade classwork alone on her laptop, occasionally getting help from her mother over the phone or through video chat while she is at work.

“I’m about ready to tear my hair out,” Reyes said. “If I had an increase to where I could pay the tuition for private school I wouldn’t hesitate, not one bit, about it.”

But she says that’s not an option. So she’s waiting out virtual learning, hoping her daughter’s school doesn’t take a huge hit.

“I can’t sacrifice her education for our financial stability,” Reyes said.

BOTTOM LINE: Yes, public school districts are seeing a drop in enrollment, and it could cost them millions of dollars in funding. How bad it could be won’t be known until budgets for next Fall are finalized in the coming months. 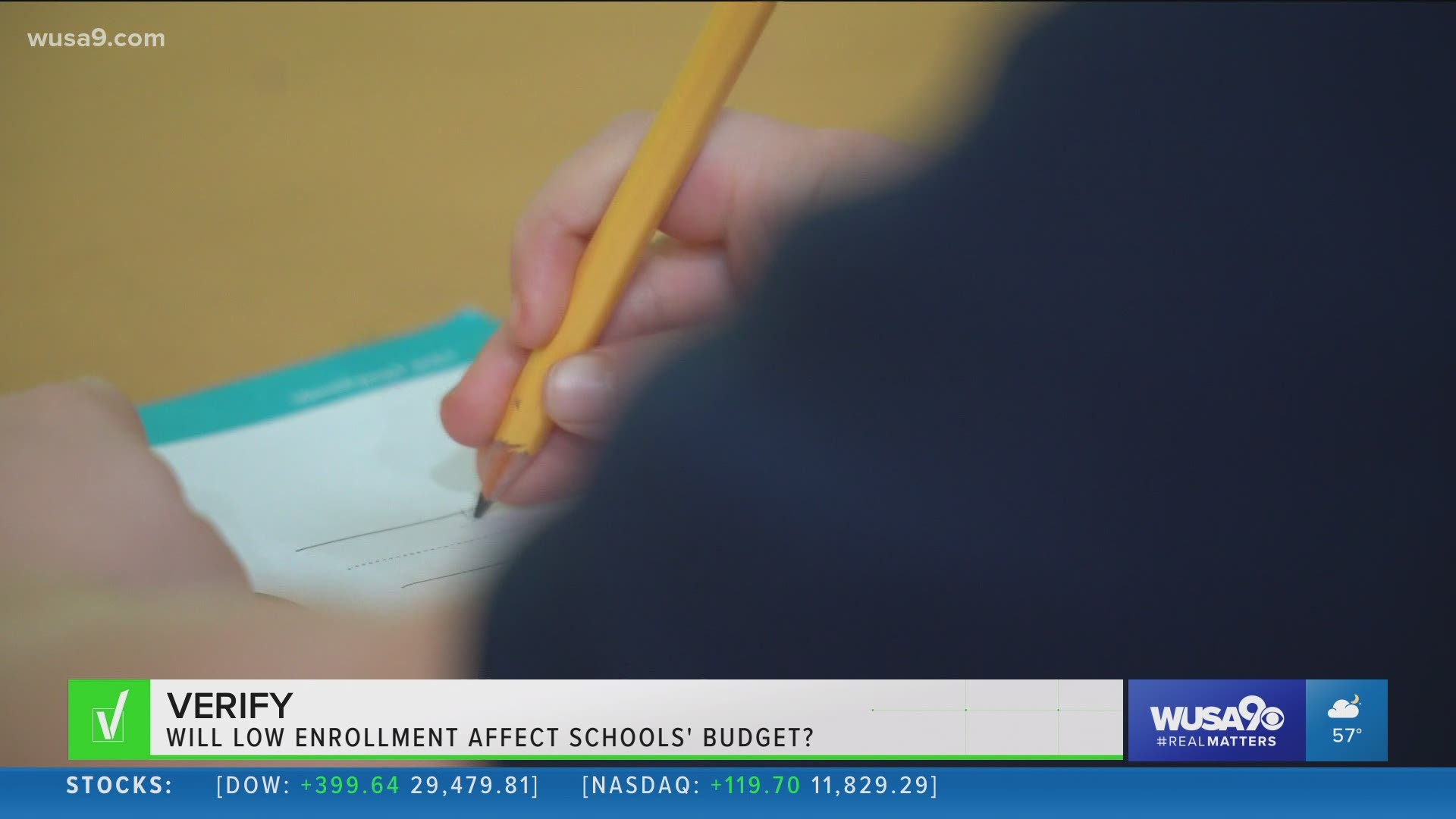