VERIFY: Are federal employees eligible for hazard pay during the COVID-19 pandemic?

The Verify team looked at whether some government workers could qualify for hazardous duty pay, if they are exposed to coronavirus on the job. 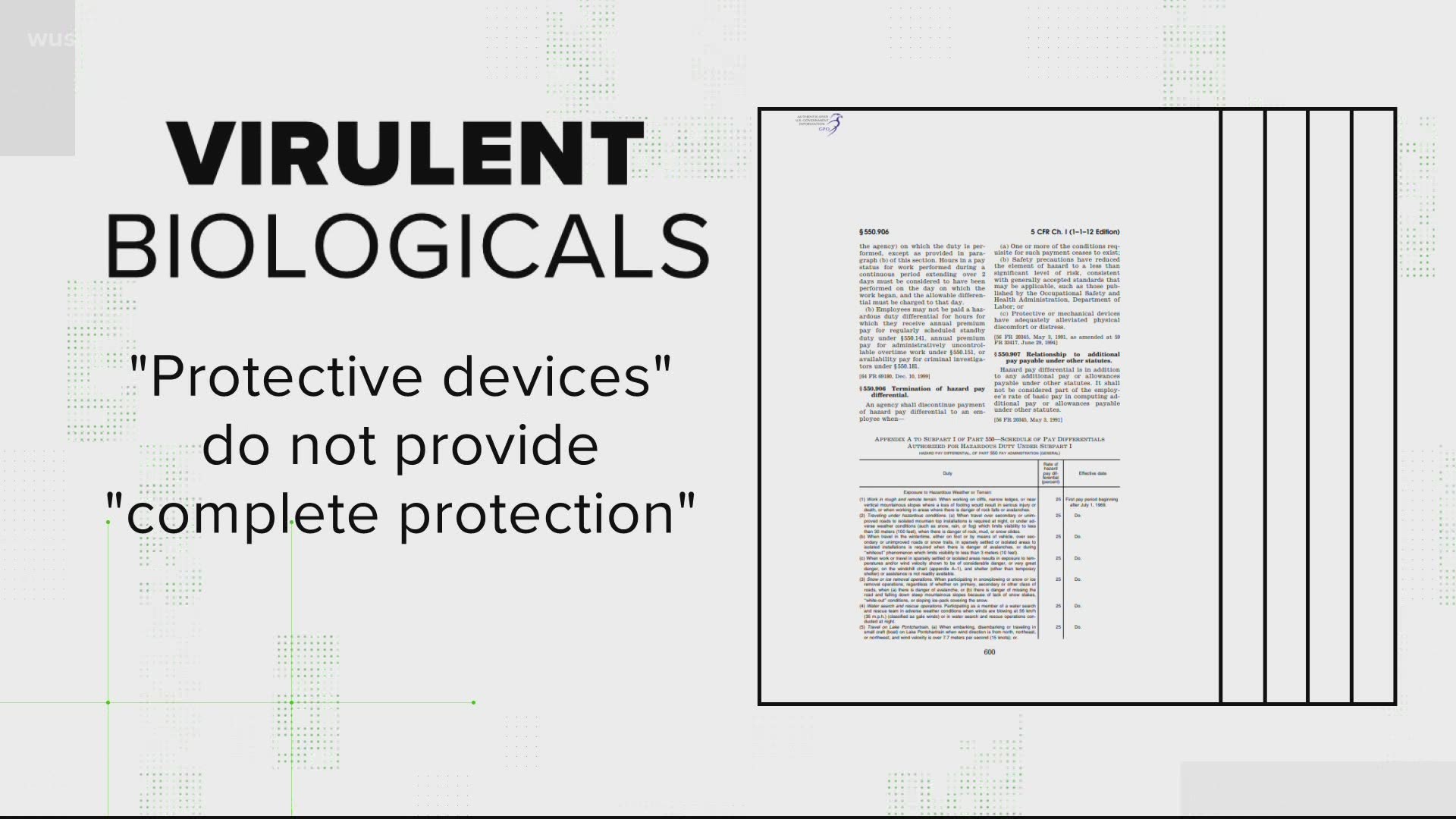 Are federal employees eligible for hazard pay during the COVID-19 pandemic?

The short answer is "yes," but with a lot of limitations.

The Office of Personnel Management has regulations about who is eligible for hazardous duty pay/hazard differentials.

Per Title 5 CFR 550, Appendix A to subpart I, there are specific conditions for when a person could get hazard pay for working with or in close proximity to micro-organic materials that are likely to cause serious disease or death, and which protective devices do not offer complete protection.

Each agency is responsible for determining who should receive hazardous duty pay/ hazard pay differentials, which is done on a case-by-case basis.

First our Verify researchers turned to the U.S. Office of Personnel Management. It's like the human resources for the federal government.

We looked specifically at a regulation that explains how a federal employee could qualify for hazard pay.

Under "Exposure to Hazardous Agents," it lists an employee who does "work with or in proximity to...virulent biologicals."

Put more simply, this covers an employee who works with or in close proximity to a material that’s micro-organic, like a virus or disease for example, which is likely to cause serious disease or fatality. If protective devices don’t provide complete protection, that employee may qualify.

So we can Verify, the government can issue hazard pay for exposure to a virus which would likely cause serious disease or death. But when it comes down to applying this, it gets a lot more complicated.

According to OPM guidance published online, exposure has to be directly related to assigned duties. Incidental exposure or potential exposure. OPM says doesn’t count for receiving hazard pay, either.

As far as who could get hazard pay, that's also complicated.

OPM says agencies themselves determine this on a case-by-case basis.

One of the factors agencies should look at is the employee's classification.

Additionally, OPM says hazard pay is not payable if "safety precautions have reduced the element of hazard to a less than significant level of risk, consistent with generally accepted standards that may be applicable."

Five of them, Veterans Affairs, USPS, FBI, FEMA and the Census Bureau, confirmed none of their employees were receiving it.

"VA continues its efforts to provide support and resources to our employees who confront the risk of exposure to COVID-19, however hazard pay is to compensate employees when risks cannot be reasonably mitigated and employees cannot be safely protected, and that is the opposite of the current environment at VA," a spokesperson for the Department of Veterans Affairs said.

The National Institutes of Health says that staff who have, since March 14, worked directly or indirectly with patients who tested positive for COVID-19 or test subjects at an NIH testing site, meet the criteria for hazard pay. However, they didn't answer how many people are currently getting it or will get it, though they anticipated it would be few.

In our research about hazardous duty pay, our Verify researchers found both Congress and the largest federal union are pushing for greater access for government employees.

“It’s in the law that hazardous duty pay is available," David Borer, general counsel at the American Federation of Government Employees, said. "We want to make sure everybody who’s eligible gets their hazardous duty pay.”

There’s also a push from lawmakers.

On May 5, Senator Chris Van Hollen (D-MD) and 18 other senators sent a letter to the Office of Management and Budget and OPM, pushing for among other things, hazard pay for front line or public-facing employees.

"By producing and delivering resource materials as well as maintaining constant and consistent contact with leaders, the Federal government has provided the flexibility on telework, pay and leave, hiring, and compensation that agencies need to achieve their missions while protecting Federal employees and contractors," Russell Vought, acting director of the OMB, and Michael Rigas, acting director of OPM said in a letter which was provided to the Verify team by Sen. Van Hollen's staff.

Our Verify team asked Sen. Van Hollen whether he felt government employees needed hazard pay, and if so, why? Take a listen to his answer: 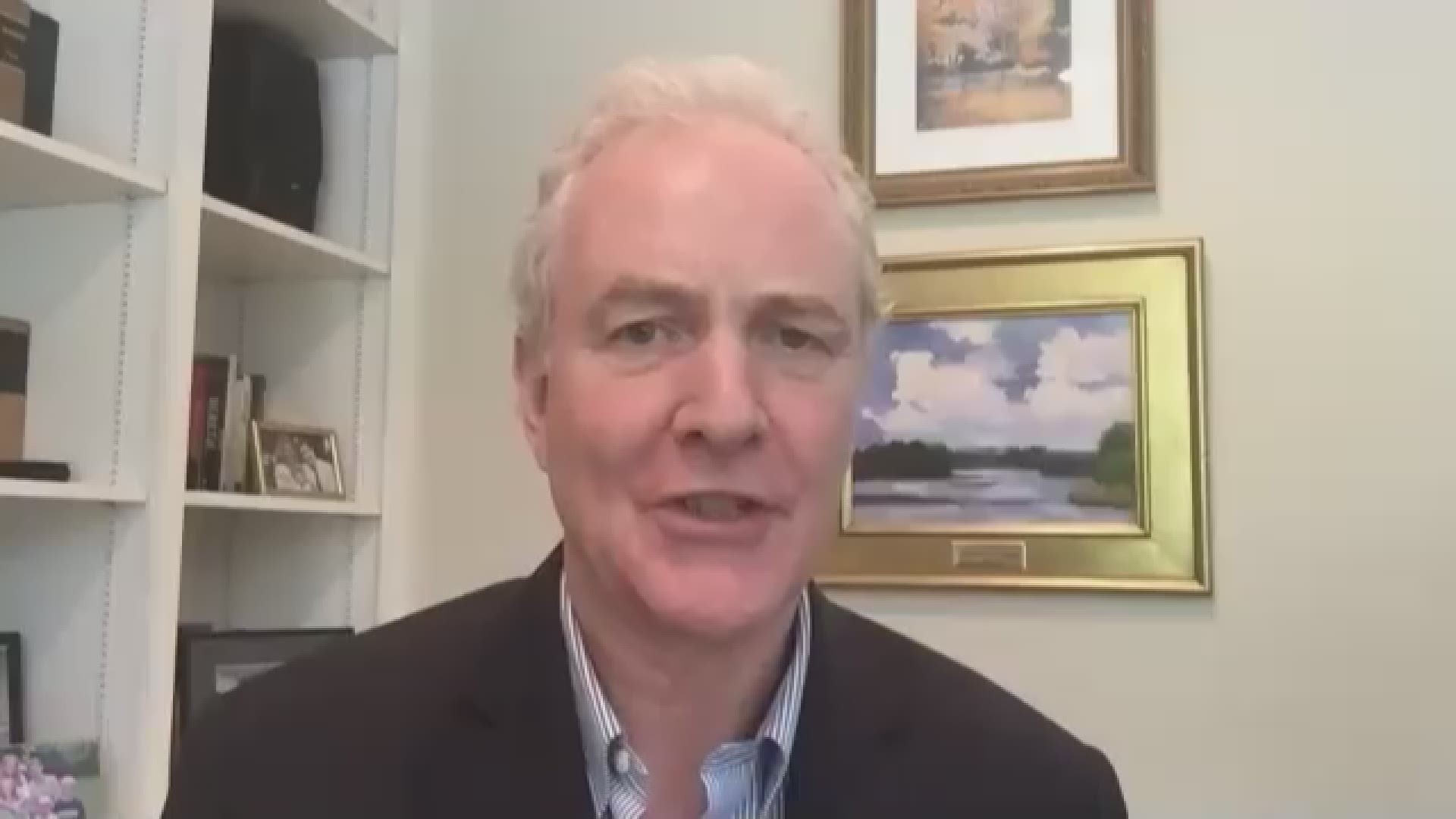 There’s also a bill called The Heroes Act, currently in the Senate, that would help fund hazard pay.

"What we would do with respect to federal employees, is to use the existing federal statute that allows up to 25 percent for hazard pay for federal employees, so we would essentially use some of the funds of the Heroes Act for that federal program," Van Hollen said.

The Heroes Act was passed in the House of Representatives on May 15, 2020. No action has yet been taken by the Senate.

RELATED: VERIFY: Are businesses allowed to go cashless? It depends where you live