VERIFY: Is it legal to hand out food to people waiting in line at voting locations?

Groups and nonprofits around the country have started handing out food to voters waiting in long lines. But what does federal election law say about it? 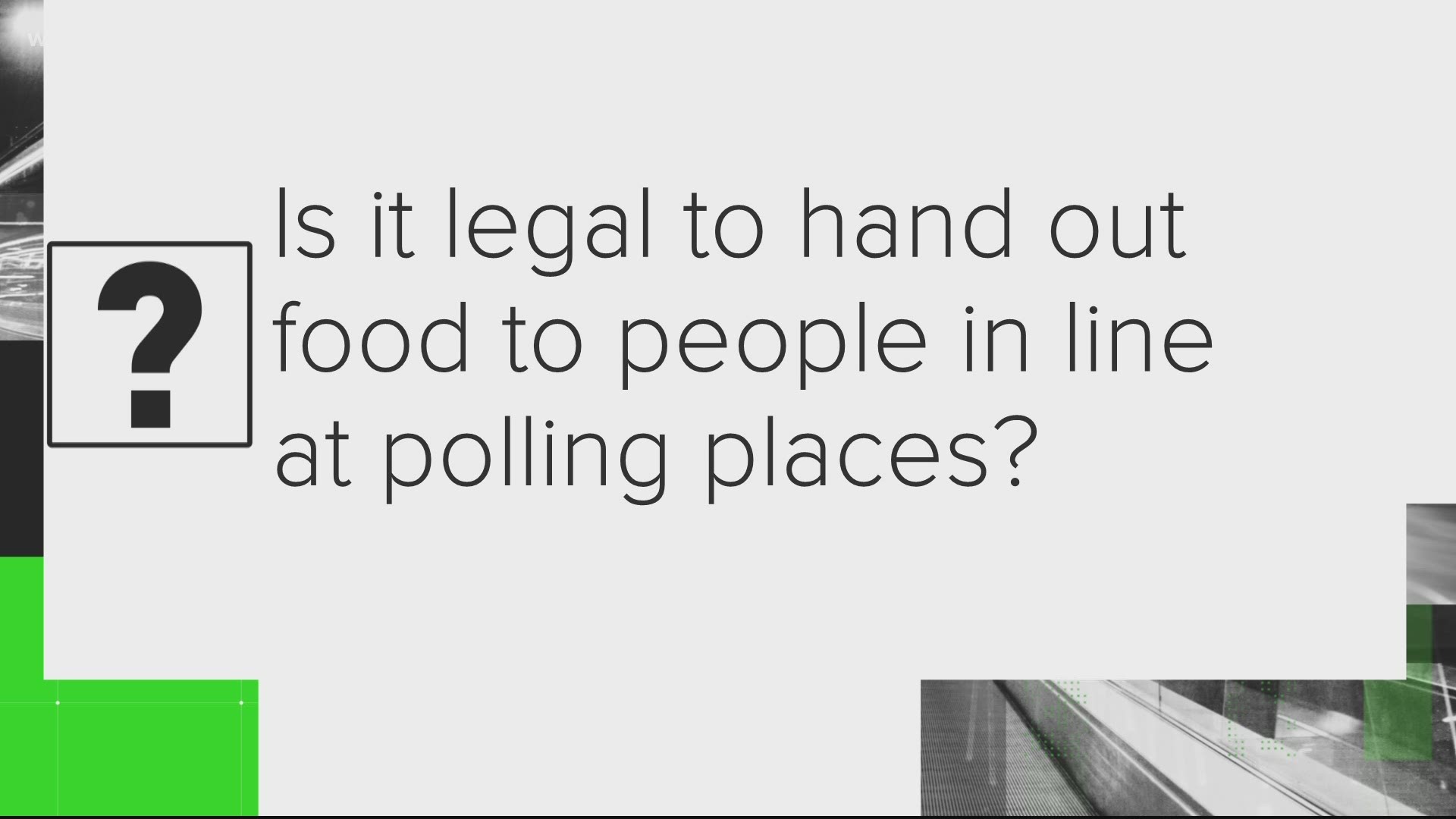 WASHINGTON — For weeks, Americans have been waiting in long lines to cast their vote in the 2020 general election. Some groups have even offered to feed voters waiting in line, and the Verify team is looking into what legal restrictions they might confront.

Is it legal under federal law to hand out food to voters waiting in line at polling places?

Yes, as long as they are not asking for anything in return or trying to influence someone's vote.

Our experts told us that when determining the legality of handing things out to people waiting to vote, what really matters is whether there is a quid pro quo.

"In terms of federal law, where you cross the line is if you're buying somebody's vote," Jon Greenbaum, attorney at the Lawyers’ Committee for Civil Rights Under Law says. "If a person told a voter, 'if you vote for x-candidate, I will give you food,' that's going to violate federal law."

RELATED: VERIFY: Here are the top three reasons your ballot might be rejected, and how to make sure your vote is counted

Tammy Patrick is a Senior Advisor at the Democracy Fund. She told us the same thing in an emailed statement:

"It is not lawful to reward a voter for voting or to require proof of voting in order to obtain something of monetary value...Anyone offering something with strings attached may be overstepping the boundaries."

One group in particular, Pizza To The Polls, has gotten some attention online from celebrities like Lady Gaga. They make it easy to feed voters; you can report long voting lines on their website and they'll send pizzas straight there. According to their website, they've already delivered more than 3,700 pizzas this year.

Make sure you’re poll ready for a fun time in line to vote, because it might be a long one! I’m going to make PB&J sandwiches for my voting snack! Make sure to pack your own snacks & go to https://t.co/7v2cVysxUR or @PizzaToThePolls to donate to help feed people in line! ❤️ pic.twitter.com/CacYVWr06h

Verify researchers reached out to Pizza to the Polls to find out what they do to make sure they're not breaking any federal laws. Their co-founder, Scott Duncombem, provided this statement, in part, via email:

“Incentivizing voting in any way is illegal, and Pizza to the Polls has worked with its experts and legal team since its inception and during multiple election cycles to ensure that no laws are broken in the process," Duncombem reads.

"There are no requirements to participate in Pizza to the Polls," he said. "The deliveries take place wherever there’s a line, and we ask our delivery people to offer the snacks to whoever is there: people in line, their kids, poll volunteers and staff, and anyone else at the location."

RT if you love pizza and democracy.

"If what you have is people that, by the goodness of their heart, are giving food to everybody who's in line to vote, and not telling people to get in line in order to get the food," Greenbaum says, "Then that's going to be okay under federal law."

So we can Verify that as long as you're not asking for anything in return, it is legal under federal law to hand out food at voting locations.

Greenbaum did offer advice to those looking to feed voters.

"Call the election officials ahead of time and tell them what you want to do, and make sure that they're okay," he says. "What you wouldn't want is to have someone else in line be concerned about it, and start calling people, and creating a mess."