Trump declares national emergency to get $8 billion for wall

The White House says Trump has also signed the spending bill to avoid another government shutdown. 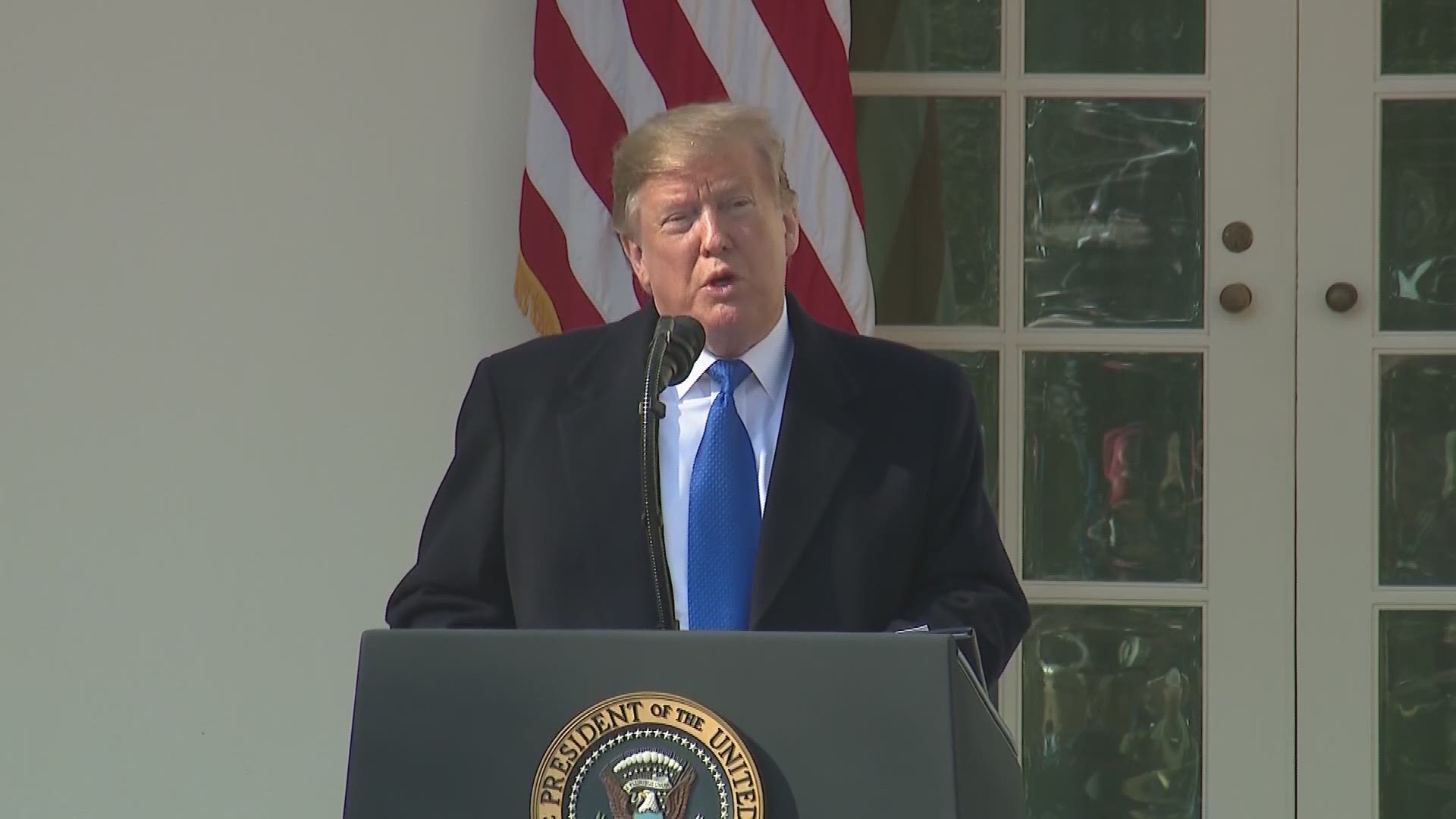 WASHINGTON — Defiant in the face of a stinging budget defeat, President Donald Trump declared a national emergency Friday to get more federal dollars for his long-promised wall at the U.S.-Mexico border, relying on a broad interpretation of his powers that was certain to trigger stiff legal challenges.

Hours after the declaration, press secretary Sarah Sanders said Trump had also signed the spending bill to avert another government shutdown and pay for limited fencing along the U.S.-Mexico border.

Bypassing Congress, which approved far less money for his proposed wall than he had sought, Trump said he will use executive action to siphon billions of dollars from federal military construction and counterdrug efforts for the wall. The move drew immediate bipartisan criticism on Capitol Hill and is expected to face rounds of legal challenges.

Trump made the announcement from the Rose Garden, as he claimed illegal immigration was "an invasion of our country."

In a comment that will surely be used to challenge the legal underpinnings of his emergency declaration, Trump hinted at the political realities behind his action. "I could do the wall over a longer period of time," he said. "I didn't need to do this, but I'd rather do it much faster."

Trump's move followed a rare show of bipartisanship when lawmakers voted Thursday to fund large swaths of the government and avoid a repeat of this winter's debilitating five-week government shutdown. Trump's insistence on wall funding has been a flashpoint in his negotiations with Congress for more than two years, as has the resistance of lawmakers in both parties to meeting the president's request. West Wing aides acknowledged there was insufficient support among Republicans to sustain another shutdown fight, leading Trump to decide to test the limits of his presidential powers.

The money in the bill for border barriers, about $1.4 billion, is far below the $5.7 billion Trump insisted he needed and would finance just a quarter of the more than 200 miles (322 kilometers) he wanted this year.

To bridge the gap, Trump announced that he will be spending roughly $8 billion on border barriers — combining the money approved by Congress with funding he plans to repurpose through executive actions, including the national emergency. The money would come from funds targeted for counterdrug efforts and military construction, but aides could not immediately specify which military projects would be affected.

Despite widespread opposition in Congress to proclaiming an emergency, including by some Republicans, Trump was responding to pressure to act unilaterally to soothe his conservative base and avoid appearing like he's lost his nerve on his defining promise to voters. Trump advisers on the campaign and inside the White House insist that, fulfilled or not, the promise of a wall is a winning issue for Trump as he heads into his re-election campaign as long as he doesn't appear to be throwing in the towel on it.

Word that Trump would declare the emergency prompted condemnations from Democrats and threats of lawsuits from states and others who might lose federal money or said Trump was abusing his authority.

In a sing-songy tone of voice, Trump described how the decision will be challenged and work its way through the courts, including up to the U.S. Supreme Court.

He said, "Sadly, we'll be sued and sadly it will go through a process and happily we'll win, I think."

House Speaker Nancy Pelosi, D-Calif., and Senate Minority Leader Chuck Schumer, D-N.Y., called it an "unlawful declaration over a crisis that does not exist" and said it "does great violence to our Constitution and makes America less safe, stealing from urgently needed defense funds for the security of our military and our nation. "

"The President's actions clearly violate the Congress's exclusive power of the purse, which our Founders enshrined in the Constitution," they said in a joint statement. "The Congress will defend our constitutional authorities in the Congress, in the Courts, and in the public, using every remedy available." 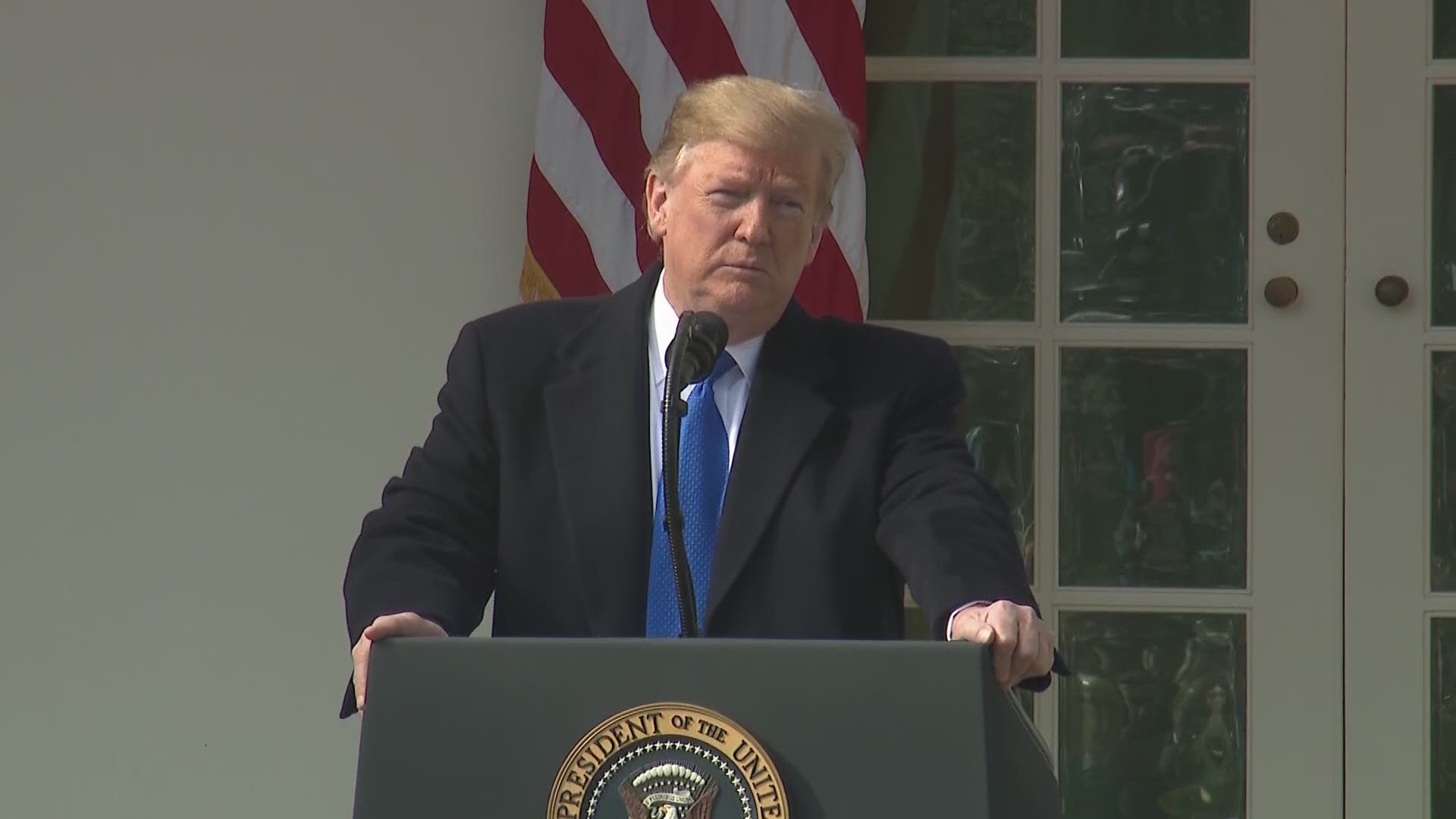 In a comment that will surely be used to challenge the legal underpinnings of his emergency declaration, Trump hinted at the political realities behind his action. "I could do the wall over a longer period of time," he said. "I didn't need to do this, but I'd rather do it much faster."

Even if his emergency declaration withstands scrutiny, Trump is still billions of dollars short of the overall funding needed to build the wall as he promised in 2016. After two years of effort, Trump has not added any new border mileage; all of the construction so far has gone to replacing and repairing existing structures. Ground is expected to be broken in South Texas soon on the first new mileage.

Trump's vision for the wall already has been substantially scaled down since his campaign for the White House, when it was to be built of concrete and span the length of the 1,900-mile border and be paid for by Mexico. Now, he's looking to build "steel slats" along about half of the 1,900-mile stretch, relying on natural barriers for the rest. Previous administrations constructed over 650 miles of barriers.

The White House said Trump would not try to redirect federal disaster aid to the wall, a proposal they had considered but rejected over fears of a political blowback.

Some Republicans warn that future Democratic presidents could use his precedent to force spending on their own priorities, like gun control. GOP critics included Maine Sen. Susan Collins, who said emergency declarations are for "major natural disasters or catastrophic events" and said its use would be of "dubious constitutionality."

Trump argued that his immediate three predecessors had made emergency declarations, though the presidents he cited did not use emergency powers to pay for projects that Congress wouldn't support.

Congressional aides say there is $21 billion for military construction that Trump could tap, but by law it must be used to support U.S. armed forces. The Defense Department declined to provide details on available money.

The declaration caps a tumultuous two months of negotiating and political warfare in the nation's capital, with consequences likely to last through next year's campaign.

Trump sparked a shutdown before Christmas after Democrats snubbed his $5.7 billion demand for the wall. The closure denied paychecks to 800,000 federal workers, hurt contractors and people reliant on government services and was loathed by the public.

With polls showing the public blamed him and GOP lawmakers, Trump folded on Jan. 25 without getting any of the wall funds. His capitulation was a political fiasco for Republicans and handed Pelosi a victory less than a month after Democrats took over the House and confronted Trump with a formidable rival for power.