The dirty secret is our recycling is full of trash and the world’s biggest buyer, China, has finally drawn the line. 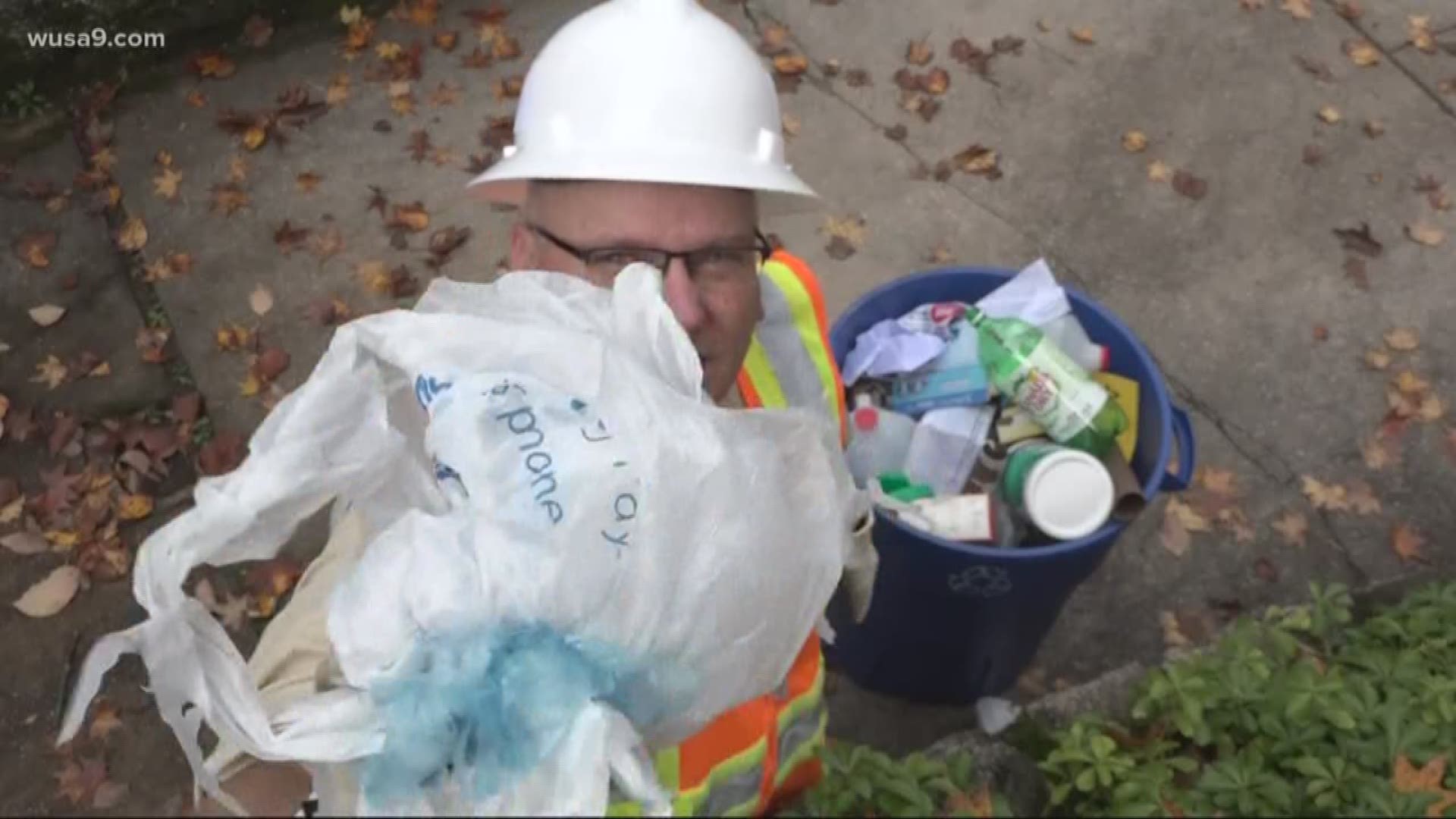 WASHINGTON — The world’s recycling market has been flipped on its financial head, and the impact has finally reached your curbside.

In small towns from Virginia to New Hampshire, local leaders are looking at the numbers and beginning to pull the plug.

Meanwhile, the major jurisdictions around the Washington D.C. area remain committed to recycling, even though the business has flipped from making modest profits to posting significant losses, which taxpayers will ultimately absorb.

"It's still cheaper per ton to recycle than it is to bury things in a landfill or send them to incinerators," said Adam Ortiz, who was the director of waste management in Prince George's County, Maryland, until taking over as the director of Environmental Protection in Montgomery County.

It’s a similar situation in Montgomery County, Maryland where huge bales of mixed paper used to bring in $155 per ton. By late 2018, the price had collapsed to merely $10 per ton.

In smaller jurisdictions like Broadway, Virginia nestled in the Shenandoah Valley’s Rockingham County, the financial burden is too much.

Broadway was forced to suspend its curbside recycling program when contractor Waste Management said it was going to stop curbside pickup service after it estimated costs would rise 63 percent, according to reporting by The Atlantic.

Other nearby jurisdictions in Rockingham County including Harrisionburg, Dayton and Timberville have all ended curbside recycling because of costs.

Residents who want to continue recycling must haul their sorted material to community bins.

Meanwhile, towns from Idaho to New York have been forced to send bales of recycled paper to landfills or incinerators after the collapse of the market for the recovered material, The Atlantic reported.

The market meltdown is the result of a major policy shift in China, which used to be the largest buyer of recycled commodities in the world. But in 2018, the country abruptly stopped buying as leaders faced down pressure from their own people to address unfolding environmental crises plaguing China.

The Chinese government determined there was too much waste in the commodities its recyclers were buying. Chinese importers were ordered to stop buying mixed paper from recycling programs in North America with more than .05 percent contamination of plastic and other items.

The standard is all but impossible to meet for US recycling programs that frequently face contamination rates of more than 30 percent because residents generally do a poor job of complying with recycling rules.

Recyclers in other countries like India and Vietnam are still buying, but at much lower prices.

At one sorting facility in Manassas, Virginia which takes curbside recycling from Arlington and Fairfax counties, the contamination is so bad the sorting machinery is shut down for about 15 minutes per shift so that workers can use grinders and hatchets to unclog the plastic bags wrapped around large steel pins.

"Plastic bags are the No. 1 issue," American Disposal Services plant Manager John Foy said. "If it’s not supposed to be there, don’t throw it in there."

Foy pleaded after showing WUSA9 truckloads of recycling being dumped at the plant filled with everything from banned plastic bags to TVs and pieces of furniture.

“People will throw anything and everything in here thinking we can sort it out,” Foy said. "They are wrong. As some point we just can’t get it all."

It’s the dirty secret being exposed by the recycling market collapse. Municipal recycling is full of trash.

"This here is enough for the Chinese to reject this," Camera said as he pulled the plastic out of the compressed cube of paper weighing more than a half ton.

The bales were being loaded onto international shipping containers headed for recyclers in India who are willing to accept the contamination rate from the US, but at a much lower price.

"These are monumental shifts in the economics of these programs," said Jonathan Sloane, an international recycled commodities broker for Canusa Hershman Recycling Corp. based in Baltimore.

"We as an industry are having to make better quality," Sloane said. "But given the feedstock you get, particularly from the residential side, that’s a real challenge."

While the industry works on better sorting technologies, local recycling programs are now ramping up education and enforcement efforts to get residents to stop throwing prohibited items like single-use plastic grocery bags in recycling bins.

A major difficulty is that not all recycling programs are the same. Some will take items others won't. It can depend on which contractor provides pick up and sorting services, and what regional markets they may have for the commodities they handle.

Meanwhile, though plastic grocery bags are harmful when thrown in recycling, many stores will collect used bags in special bins as long as they are clean and not mixed with other items.

The results of this system can be head-spinning for a citizen who just wants to do the right thing.

In Montgomery County, Md., for instance, residents must separate paper products into a separate container from other recycling in what’s called a dual-stream system.

One information flyer separates acceptable materials into 15 different categories that can be nearly impossible for homeowners to memorize.

Meanwhile, in Fairfax County Virginia, all but 10 percent of county residents must contact the private trash hauler who handle’s their neighborhood to figure out what they will take.

Many of the prohibited items in Fairfax County such as plastic clam shell food containers are acceptable in Montgomery County.

Meanwhile, Prince George's County, Md., asks residents to put all their recycling into one bin which is called single-stream recycling.

Program experts said it's no wonder contamination rates and confusion are high.

One hard and fast rule across all programs is that no plastic bags are acceptable in mixed recycling.

What will my community take?

The following links will help you understand your local program and do a better job of reducing the overall contamination rate: