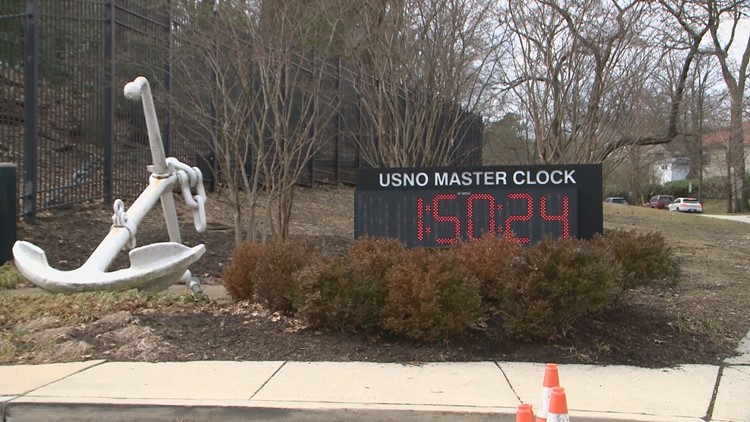 Photo by: WUSA9
It may not look like much but the display outside the US Naval Observatory in Washington D.C. is the official source of time and chances are you use its data every day.

The history of time and why it matters

WASHINGTON — The U.S. Naval Observatory on Massachusetts Avenue is one of the oldest scientific agencies in the U.S.

Not only do they keep track of the positions and motions of the earth, sun, moon, stars, they’re our official source of time.

"We were established basically to determine how fast or how slow clocks ran. And this has to do with the way that we used to do navigation which is a Celestial navigation," said Geoff Chester, the public affairs officer at the U.S. Naval Observatory and expert in measuring time.

Topper Shutt got an exclusive look at how the facility keeps an accurate track of time and why time is so important.

"The measurement of time and the definition of time is what we do here at the Naval Observatory, and we have been doing it for a very long time so to speak," Chester said.

The big question: Why should we care about time?

GPS is only as accurate as the time.

E-commerce would shut down you couldn't swipe your card anywhere.

You couldn't communicate between cell phones without accurately measuring time.

That’s because when your data is transmitted it’s chopped up into little packets of information that have digital time stamps.

The packets get scattered out over a network and a computer reassembles the packets in the right order when they reach their destination.

"We found that the Earth is a really a terrible time keeper," Chester said. "It’s slowing down for the most part on the order of millionths of a second per day."

So how is time calibrated accurately?

All clocks, pendulum, electric, quartz and atomic clocks define time by counting something that produces a regular periodic event, or an 'oscillation.'

And certain atoms like the cesium atoms in atomic clocks do that, they produce an oscillation that can be measured.

Here’s how it works. When an atom is in its natural state, just hanging around, it’s not doing much of anything.

But when it’s zapped with microwaves, the atom gets agitated and oscillates much, much, much, faster. In one second, a cesium atom vibrates or ticks 9 billion times.

Atomic clocks use the oscillation or bouncing of a certain atom to measure time.

A team of PhD-level Atomic physicists make sure that time in the U.S. is calibrated to those ticks in the nearly 100 atomic clocks spread around the Observatory.

Every 100 seconds a computer analyzes the output of each individual atomic clock that we have.

We choose the clocks that are performing closest to their predicted value.

And then they get a number a rating number that allows us to select the 40 or 50 best performing clocks and from those clocks we then determine our realization of what time is. It's sort of time by committee.