It may be hard not to yell back or gesture at the other driver. But if you do, police said that actually makes you a participant in the road rage. 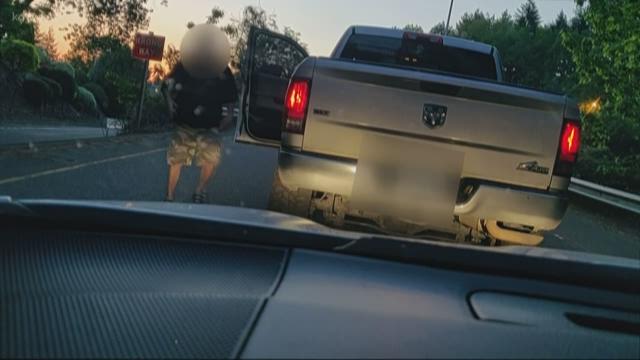 PORTLAND, Ore — A woman involved in a road rage incident this past weekend in Southwest Portland said she is still shaken up by it.

Video sent to KGW shows the incident, which happened on the morning of May 11. It looks like a close call as the pickup crosses a double yellow line and illegally passes the car Ariel Yates is driving.

Yates said she was on her way to work when the pickup came speeding up behind her. She said it started with tailgating, then the illegal pass caught on camera.

The other driver slams on his brakes, gets out, and storms up to her window. The two yell at each other before he gets back in and drives away. While the driver of the pickup is in the wrong for illegally passing like that, Milwaukie police officer Zane Odem said how you react in the moment matters.

“Let it go because you're not going to do yourself any good,” Odem explained. “It may make you feel better in the long run to honk, you know, 'Got that off my chest, that person now knows that I know they did something wrong.' But, ultimately, it could end up something like this.”

It may be hard not to yell back or gesture at the other driver, but if you do, police said that actually makes you a participant in the road rage. Instead, try to ignore it, brush it off, don't engage, and if you can, drive away.

“Don't antagonize somebody if they're running at you. If they cut you off or if they do something dumb, just let them do it because if you start honking and tell them all the things they're doing wrong, they may stop in the middle of the road and come back at you. You don't want that to happen,” Odem said.

Bottom line: You do not know what that other person is capable of or if they have a weapon. Thinking about that now, Yates said she may have reacted a little differently.

“I might honk a little less, maybe not lay on the horn the whole time. I think I'm still going to honk if somebody does that to me just to notify them, like, what you're doing is wrong. I feel like you should know this, but I probably won't lay on it like that,” Yates said.

If someone does get out of their car, like in this case, police said to make sure your windows are rolled up and your doors are locked. Do not engage with the person and if you can, drive away.

The incident happened in Portland, so Yates reported it to Portland police. She said police told her there was not much they could do.