TOMAHAWK, Wis. — At a time when people of different stripes can’t seem to get along, nature is showing the way.

Though natural rivals to ducks, a pair of loons on a lake in northern Wisconsin has adopted a duckling that became separated from its mother.

Piper, a biology professor at Chapman University in Orange, California, has spent his summers studying loons in Wisconsin’s Oneida County since 1993.

“It’s never happened before,” he says of the June discovery

Piper and his research team with The Loon Project have watched the duckling ride the backs of its adopted loon parents, just as baby loons do.

“I have never, ever seen a loon have a duckling on its back, never in my entire life that I have watched loons,” Linda Grenzer says. The naturalist and photographer has been documenting the phenomenon since June.

Photographer Linda Grenzer has been documenting the loon pair and its adopted duckling.
Boyd Huppert

“I'm seeing something that I'll probably never see in my entire life again,” she says.

Egg fragments found in the loons’ nest suggest the pair successfully hatched a chick of its own.

Piper suspects the chick was killed by a predator and that, within hours, the loon parents crossed paths with the wayward duckling.

“They joined forces, I guess you could say, and they both fulfilled the others need at that time,” Piper says.

Evelyn Doolittle, an intern on Piper’s team, was the first to spot the loon pair raising the duckling, though new to The Loon Project, she didn’t exactly know what she had spotted.

A loon pair takes its adopted duckling for a ride.
Linda Grenzer

“I got back and said to my co-workers, “Wow, chicks sure look a lot like ducklings,” Doolittle said with a laugh.

To say the relationship between loons and ducks is usually strained may be an understatement.  Piper says adult loons have been known harass ducks and even kill their ducklings.

“The loon is the head honcho of the lake and ducks better move for it,” Grenzer says.

Yet, on the lake near Tomahawk, the tables have flipped.  “This is their child, yes, their chick,” Grenzer says, “and they're doing everything they can to protect it.

As the weeks have passed, the ducking has learned the ways of loons. Grenzer has taken video of the young mallard diving, staying under water for a full ten seconds.

Though constantly on lakes around Tomahawk, Grenzer has never before witnessed a mallard dive.

“It learned it from the loons.  It had to have,” she says.

Another of Piper’s interns has taken pictures of the loon feeding the duckling fish, again, not typical mallard behavior.

If two rival species can make this situation work, Piper raises the possibility of lessons beyond the lake.

“You know, we humans look at other humans a little bit different from ourselves and see only the differences,” Piper says.  “Maybe humans could learn a lesson or two from them.” 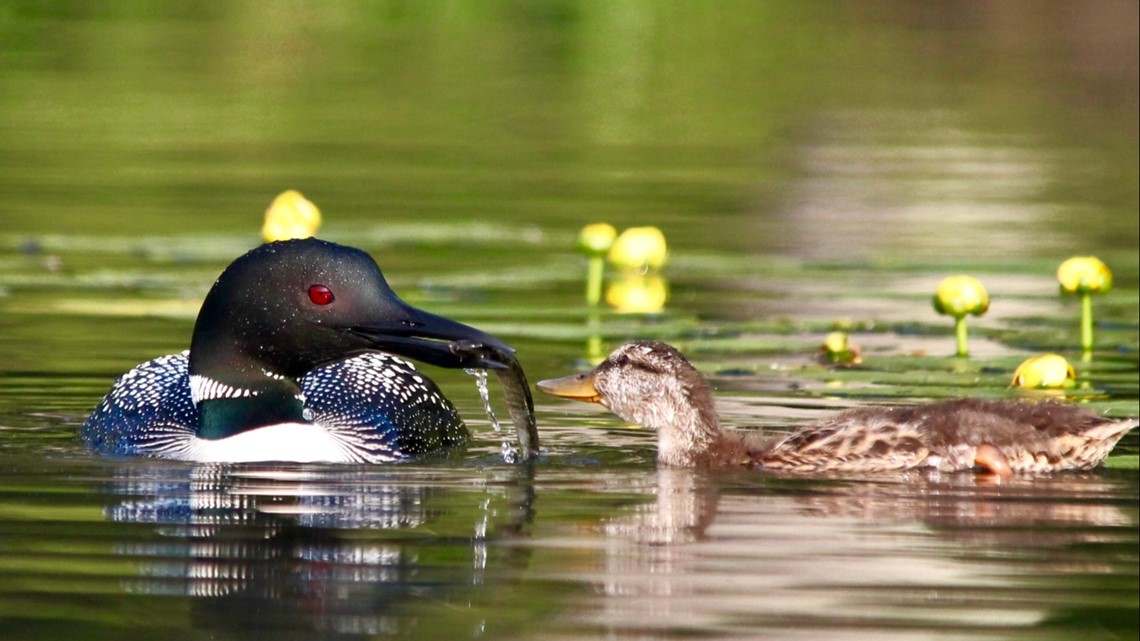