Both the president and vice president called the site a model that others around the country can follow. 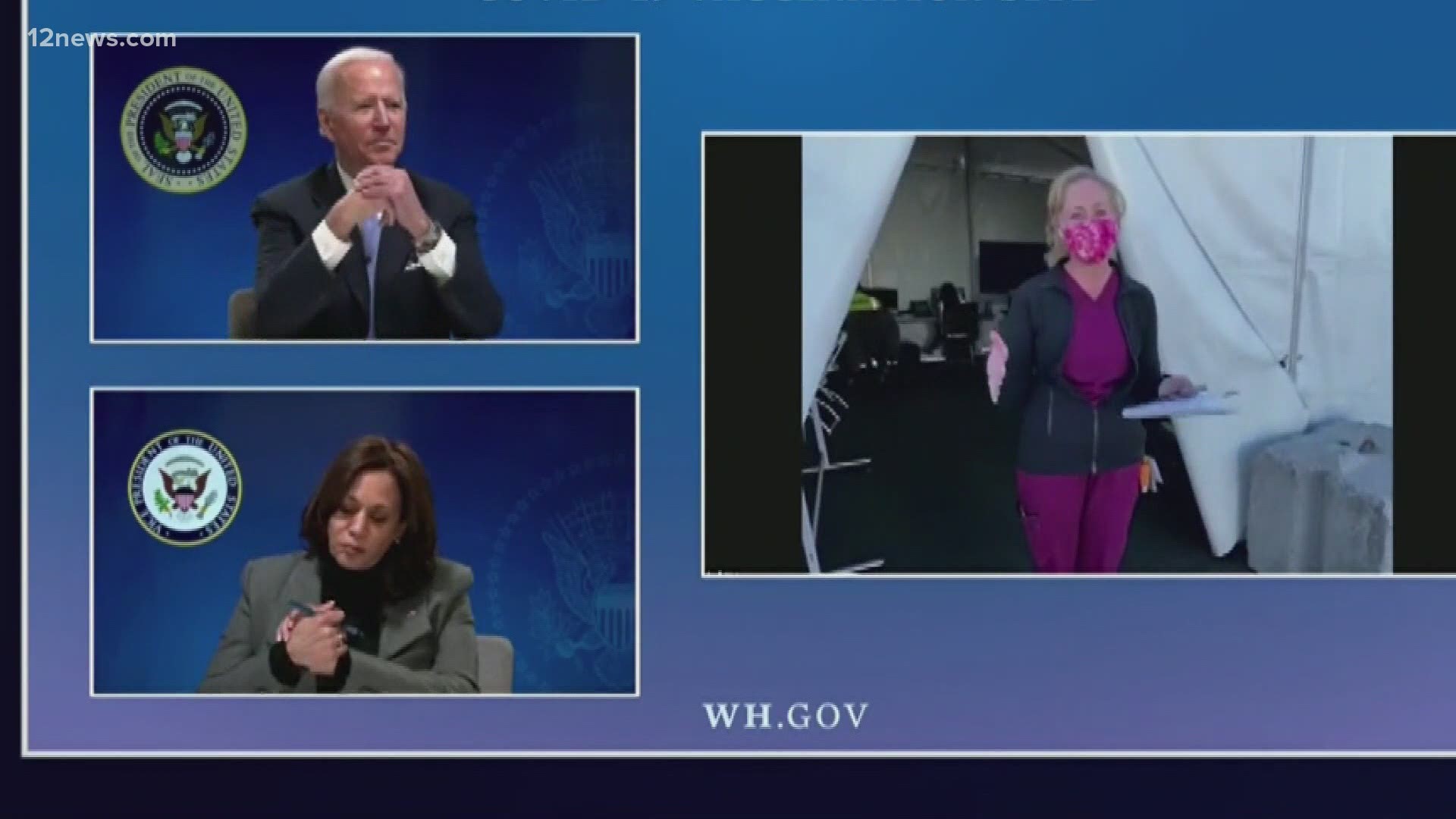 Dr. Cara Christ and other leaders at the site showed the president and vice president around the site, talking about what’s worked and what they’ve done to improve.

Both the president and vice president called the site a model that others around the country can follow.

Other NFL stadiums to be used

Since Jan. 11, State Farm Stadium, home of the Arizona Cardinals, has been used to vaccinate about 18% of the Arizonans who have received at least one shot of the COVID-19 vaccine.

“This site was developed to be replicable,” Christ said.

The Arizona Department of Health Services has since opened up Phoenix Municipal Stadium to offer drive-thru vaccinations, following the model from State Farm Stadium.

Christ said plans are in the works to develop a site in Pima County in the coming weeks.

During the tour, Biden told Christ the NFL commissioner had called Biden during the Super Bowl to offer all 30 football stadiums to the government to use.

“I think they’re going to be coming to you to look at how you did it because you’re doing such a great job,” Biden said.

During the tour, Christ outlined how they are helping keep up with supply on-site by offering a vaccine to those who come in a car with someone who has an appointment.

Christ said, however, it’s a clinical decision based upon supply.

The president said he was “pleased” and “surprised” the state was offering the additional shots to others without an appointment.

This is a practice the state has been doing for several weeks.

Future of vaccine supply looking up

State Farm Stadium is now averaging more than 8,000 vaccinations per day but has a capacity for up to 12,000.

The limiting factor for both of the state’s sites is vaccine supply.

“Some of the information we were given turned out not to be accurate in terms of vaccine supplies,” Biden said.

During the tour, the president was hopeful things are looking better for the future of the supply.

"We’ve now been able to go out and talk with personally the vaccine manufacturers they’ve upped significantly the commitments of the vaccine they’ll produce and when it will be produced,” Biden said.

State has filed request for additional 300,000 doses per week again

A few weeks ago, the state had requested an additional 300,000 doses of the COVID-19 vaccine from the federal government.

The requests were denied before Biden took office.

Christ told 12 News that the request has been submitted again, and they’re waiting on a response.

“We know that we’re not the only state asking for additional resources,” Christ said.

“In order to make sure that we were running all of our planned PODS at capacity as well as the current things that are running in our communities we need those additional 300,000 doses.”

At the end of last week, the state had used 72% of the vaccine allotment it has been given thus far. Christ stated last week the goal was for the state to use between 70 and 80% of the allocation per week.

Christ said while the 72% is in the goal, the state is working to get the percentage utilized up higher.

“We’re still working with our partners to make sure that they have the doses they need but that they’re not stockpiling anywhere,” Christ said.

Subscribe to the 12 News YouTube channel to receive notifications on the latest videos about the coronavirus vaccine and the developments on the distribution in the United States.