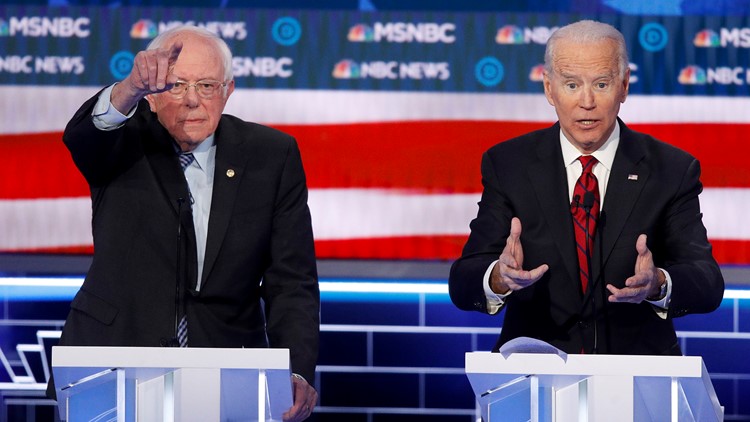 Phoenix Democratic debate between Biden, Sanders moved to DC due to coronavirus concerns

PHOENIX — Two days after announcing the Phoenix Democratic Debate would go on without an audience in attendance, the debate will no longer happen in Phoenix due to COVID-19 concerns.

The debate will be moved to Washington D.C. according to CNN.

Additionally, Biden had been scheduled to attend a Phoenix fundraiser Saturday evening, the night before the debate. 12 News has learned the fund-raiser was cancelled because of coronavirus fears.

The full statement from the DNC on the debate is below:

“Out of an abundance of caution and in order to reduce cross-country travel, all parties have decided that the best path forward is to hold Sunday’s debate at CNN’s studio in Washington, D.C., with no live audience.

“In addition, the DNC, CNN and Univision recently learned that Univision anchor and moderator Jorge Ramos was in proximity with someone who was in direct contact with a person that tested positive for coronavirus. Both Mr. Ramos and the person he was in contact with are in good health and symptom free. Despite being cleared by medical professionals and out of an abundance of caution, Jorge has decided to step aside from participating in the upcoming March 15 democratic debate. Univision’s News Anchor Ilia Calderón will moderate the debate in his place.

“Our number one priority has and will continue to be the safety of our staff, campaigns, and all those involved in the debate.”

According to a statement from Secretary of State Katie Hobbs, counties throughout the state will allow curbside voting for those who need it. Facilities will be fully cleaned and disinfected where voting takes place. And staff will advise people to avoid crowds on Election Day unless they are voting.

More than 3,100 voters were mailed postcards with their new polling location information in Maricopa County.

The cancellation of the debate comes a day after President Trump addressed the nation, announcing a sharp restriction of travel from Europe to the U.S.